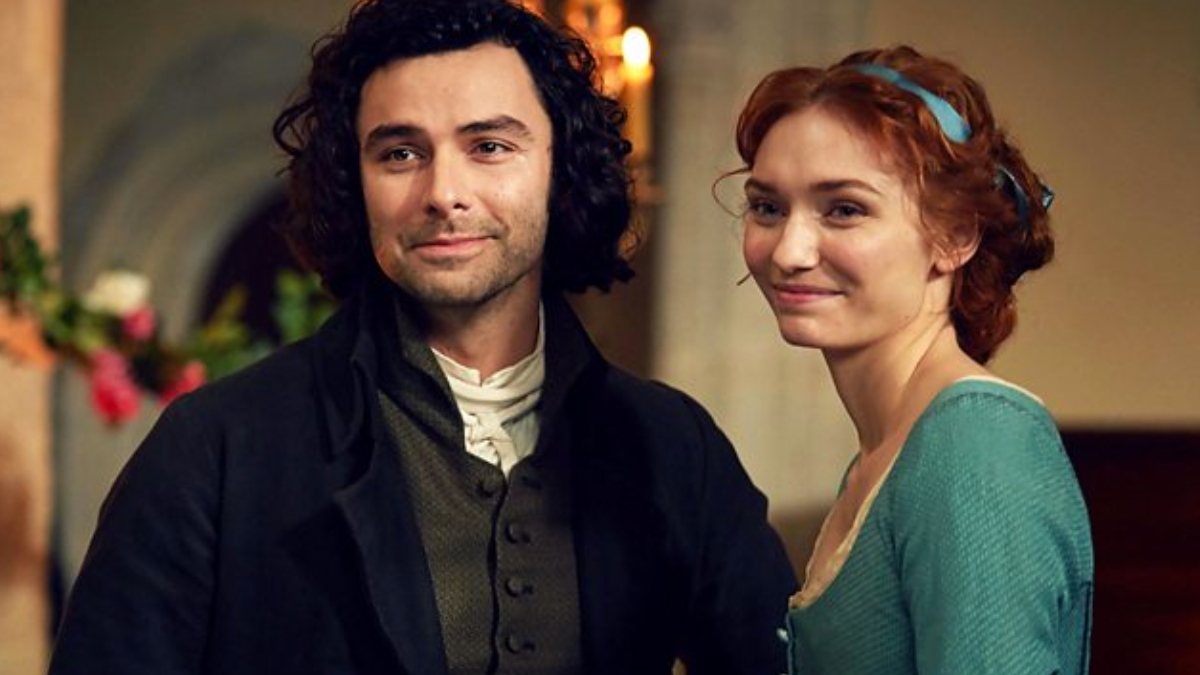 Stop all the clocks, cut off the telephone, prevent Garrick from barking with a juicy bone.

Aunt Agatha is dead, and now nothing can ever come to any good.

Not least because Agatha’s final act was to plant a terrible seed in George’s twisted mind. “That were no eight-month baby”, she snarled before bursting an aneurysm and clocking out in her rocking chair. The insinuation that Ross Poldark may have “got there before” him appeared to give George an aneurysm of his own. And gave us a reminder that Jack Farthing is terrific when given something other to do than tilt his head back and inhale through his nose.

If we’ve learnt anything from series three (and one, and two for that matter), it’s that an injured George Warleggan is a dangerous creature, devoid of conscience or mercy. Crimes against him, real or imagined, are punished to the full extent of the law and beyond. Elizabeth will pay, Ross will pay, Valentine will pay, everyone will pay. But not until George has schemed the most personally profitable course of events. At present, he’s a would-be MP who can ill afford a public scandal. He’s more likely to bide his time than act rashly.

That said, there’s not too much time left to bide in series three. We’re now two hours away from the end and almost everything is in disarray. Demelza and Ross are at breaking point, Morwenna’s married to a monster, and Elizabeth is in clear and present danger. Only Caroline and Dwight, now officially wed—for which occasion Caroline wore a hat of especial magnificence—are enjoying smooth sailing on the good ship matrimony. Good for them.

Demelza was frustrated by her husband’s stubborn refusal to enter local politics and his obliviousness to the fact that Lieutenant Hugh Armitage spent the episode trying to charm her knickers onto his bedroom floor. The young navigator went so far as wangling an invitation to Sir Francis Bassett’s party so that he could gaze over the table at Mistress Poldark from underneath his curly fringe.

Like a Come Dine With Me contestant with his eye on the prize, Sir Francis had arranged surprise post-dinner entertainment for his guests in the form of a set of skittles, which provided the perfect cover for Hugh to snake his way over to Demelza’s side and declare himself under the spell of her unparalleled beauty.

A self-styled rebel artist, Hugh Armitage is surely bad news. He’s that boy in your sixth form who carried a copy of The Bell Jar everywhere and wrote you love songs that turned out to be by James Taylor. Run a mile, Melz. We know what those Romantic poets were like. Syphilis-pocked shaggers the lot of them.

Elsewhere, Sam Carne finally did something to make us like him by having impure thoughts about Tholly’s daughter Emma, a woman with a quick mind and a quicker tongue who’d clearly run rings around him if he was lucky enough to convince her to.

A purer love is to be found between Drake and poor Morwenna, whose ardour hasn’t diminished after months of separation. He’s taken to pining for her topless and wet as if he’s Mr July in a charity calendar, much to the admiration of the local winkle pickers. Given a new living as a smithy, the first thing Drake did was make a likeness of his absent beloved to wear around his neck.

Morwenna’s love for Drake has become a protective mantra whispered at night to counter the abusive grotesque she married to save his life.

Morwenna’s scenes in episode seven were harrowing. Starving peasants and cruel magistrates notwithstanding, Poldark tends to shy away from the darker side of life, but her situation is hard to stomach. She’s heavily pregnant and enslaved to a cruel husband who treats her like an inflatable sex doll, available to be unrolled and pumped up for use whenever he demands. His contrast to sweet, lovelorn Drake Carne couldn’t be sharper.

Whitworth’s character was transformed this week from comically preening fop to rapist and violent abuser. Having hitherto been led to laugh at the man, it made for an uncomfortable shift. I can only hope it was a necessary one to excuse the awful fate the writers have in store for him. Boiling in oil, perhaps, or being tossed into a Quimper prison with ‘Je deteste la Republique’ daubed on his forehead? I’d be fine with either.

The big scene this week though, belonged to Agatha and George. Their final confrontation was thrilling, not only for all the guttural growling, but also because it’s been so long in the coming. After months of wishing each other dead under their breath and doing ‘devil horn fingers’ behind each other’s heads at the family portrait sitting (probably), their rancor erupted in an exchange so toxic Trenwith will need fumigating before it’s fit to inhabit.

A tribute then, to a redoubtable woman who went down fighting. She may not have lived to see one hundred, but she’ll live on in our hearts. Charge your cups and raise them in memory of Aunt Agatha, the trumping, tarot-reading, snarking hero of Trenwith.