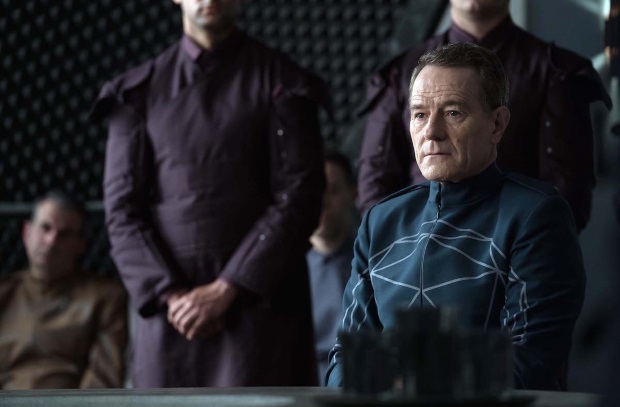 In Human Is, Bryan Cranston and Essie Davis star in a story of galactic warfare and a loveless marriage. Spoilers ahead…

One to please PKD purists, the latest Electric Dreams episode is this series’ most faithful to its source material yet. Names have been changed, 1950s gender politics have been updated and saucy scenes added, but writer Jessica Mecklenburg tells the original story of a dwindling marriage rejuvenated by an unexpected source.

I say unexpected, a Metamorph from the planet Rexor IV is exactly the sort of thing you’d expect to find in sci-fi. It’s as archetypal as the question posed by this episode, one that, thanks to writers like Philip K. Dick, now feels indivisible from the genre: what does it mean to be human? If an alien that takes the natural form of a novelty Plasma Lamp shows sacrifice, kindness and love, is it more human than a man who doesn’t?

Colonel Silas Herrick (Bryan Cranston) may be “a courageous and unwavering leader” but he’s a prick of a husband. He’s so cold to wife Vera (Essie Davis) that when he blasts off on a life-threatening space mission, he barely says goodbye. It’s little wonder Vera spends her evenings cosplaying as a kinky Scottish Widow in “the Maze”, the lowest level of the cliff-side honeycomb structure in which this heavily stratified future-Earth society exists.

Vera’s visit to the sickness-yellow Maze is hardcore stuff. She fills the void in her marriage by taking part in exhibitionist threesomes with exotic strangers. It’s very Lady-Gaga-music-video, all subs, doms and rubber-wrapped gimps stuck with pins, necking in plastic bubbles. Director Francesca Gregorini trains our eye on the decadent eroticism, contrasting it effectively with the static geometry of life in the higher echelons.

The Herricks enjoy Level One status, which means they live in a luxurious world of cool blues, greens and steel greys. When she isn’t directing space missions or going on erotic adventures, Vera spends her time jogging through computer-simulated landscapes, bathing in gallons of water that’s sold black-market by the bagful in the Maze, or wearing silk pyjamas and gazing mournfully out of the window at the wasteland Earth has become. Essie Davis makes a terrific model for the location. The scenes depicting her lonely existence feel like scrolling through the Instagram account of an especially chic Danish design company.

The elegance doesn’t quite extend to the Herricks’ uniforms, which are decidedly future-retro. At work, they resemble nothing so much as a couple of air stewards. Stewarding air, aptly, is Silas’ latest mission. With oxygen supplies dwindling on Terra, he leads a team to boldly go and nick it from some Rexorians.

The plan backfires when the aliens prove a match for the humans, and only two crewmembers survive, Silas amongst them. He returns a different man – kind, loving, attentive and with a new-found taste for the sensual. Fresh strawberries replace utilitarian protein shakes as breakfast at the Herrick home, while their long-absent sex-life comes back with a bang.

Following the attack on Rexor IV, we learn, Silas’ body and memories were infected by a Metamorph who’s been puppeting them around and showing up the OG Silas’ marital deficiencies like a particularly enthusiastic maternity cover. Is this person still Silas? Is he even a person? Is he the enemy?

Time limitations rule out any real exploration of this story’s Homeland-meets-Battlestar Galactica political thriller potential. The new Silas is an enemy of the heavily imposed state, but that’s not the story here. This is a tale about loneliness and a thirst for companionship so great that it’s willing to transcend the boundaries of species. It’s the story of how, when an alien murdered and replaced her husband, Vera got her groove back.

Both leads give good performances (and hello to Liam Cunningham as uncompromising General Elin). In close-up, Davis’ face carries much of the emotional storytelling, while Cranston moves from hateful to warm and sympathetic with ease. Capable performances and handsome interiors though, don’t make for a wholly engrossing hour. Vera’s story is told with such chilly austerity, it’s easier to admire than warm to.

It doesn’t help that Human Is continues this series’ trend for humourlessness. Crazy Diamond aside, the stories have all elected to forget PKD’s weirder excesses. Perhaps it’s more about its placement in the series as a whole, but as brilliant and potential-packed as this concept is, entirely straight-faced episodes like this one are starting to feel like something of a slog, however good they look.