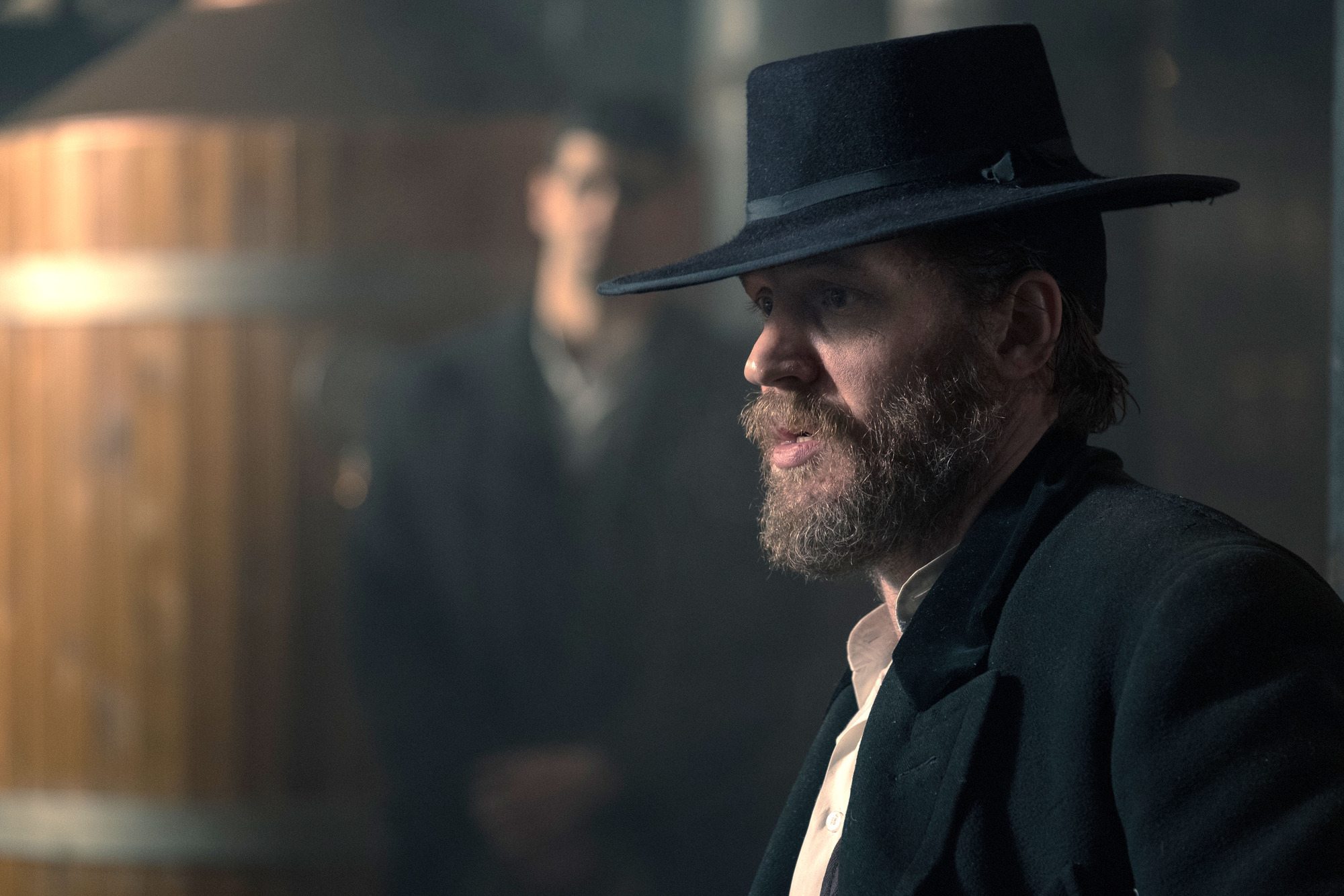 Is Tommy about to walk into a trap? Or is he one step ahead? Spoilers ahead in our review of the latest thrilling Peaky Blinders episode…

Is Polly really plotting against Tommy, or are they working together against the Italians? Craftily, episode four kept both possibilities open while delivering two thrilling action sequences, keeping roughly half a dozen other plot threads spinning, welcoming back a few old faces, pointing in some new directions, and ending on a cliff-hanger that saw Tommy driving off to—perhaps—certain doom. All that in a single hour of storytelling. This show doesn’t half give us our money’s worth.

Polly drawing a black star in Tommy’s diary is our best evidence that she’s working with rather than against him. Tommy knows the significance of a black star, having drawn one on his calendar in series one to mark the day they were planning to kill Billy Kimber. There’s little chance he’d see that symbol and happily assume he was really driving off to a benign prize-giving at the Institute.

There are other hints too. Tommy assured Aberama Gold that when his and Luca Changretta’s paths crossed, he wouldn’t “be so careless” as to let him get away. “When will your paths cross?” asked Gold. “Soon,” said Tommy.

And if Polly and Tommy aren’t in cahoots, it’s still likely he’s wise to the deal she made. First of all, there’s the look on Tommy’s face after hearing Michael’s lie about the reason his life was spared. Second of all, this is Thomas ‘one step ahead’ Shelby. When does anyone succeed in pulling a fast one on him?

This week? Well, twice, as it happens. Jessie Eden emptied his buses of workers and Luca Changretta played Tommy like a violin, predicting that he’d see through Mrs Ross’ invitation and using her tea party as a distraction for the attack on Michael’s hospital. (That’s the third time Michael’s faced and escaped death this series. Perhaps the apple orchards of home aren’t looking so boring to him now after all, hence his decision not to warn Tommy?) Add May’s rejection and Lizzy’s pregnancy (this show believes in tea-leaf readings, thus so do we) and Mr Shelby wasn’t having a good week.

That said, he’s at least so far avoided the kind of near-death beating he usually sustains around this point in a series. His only injuries were to his pride, thanks to May choosing to take a slow boat out of Dodge, and a series of jibes about him having kept his hands clean for so long that he’d forgotten how to get them dirty. Johnny Dogs joked Tommy no longer knew which end of a gun the bullets came out of, Aberama Gold told him he was a paper pusher, and finally Alfie Solomons told him, midst a brilliantly entertaining gush of pronouncements on everything from the best way to rid yourself of starlings to the joys of outdoor defecation, that Tommy’s balls had fallen off.

Series four has made us wait for Tom Hardy’s character, but our patience was richly rewarded. Alfie talks continuously, barely pausing for breath or to think, and every line out of his mouth is funnier than the last. You’d call him a clown were he not simultaneously so unrepentant and menacing. If one of the secrets to Peaky Blinders’ success is its unpredictability, and it is, then he represents exactly that.

Solomons is the most threatening ally Tommy has. Twice this week, Tommy described Alfie as a friend, but this is the ‘friend’ remember, who betrayed Tommy to the Economic League last series, an act that, admittedly unbeknownst to Alfie, led to Charles being kidnapped. And that was after he had Arthur garrotted in series two. There’s no honour among thieves, it seems, just people who are variously of use and not of use. For an up-and-coming boxing promoter and international bootlegger though, Alfie’s too useful a contact (and source of information on pal to the Changrettas, Sabini), not to forgive for past transgressions.

Forgiveness, or the impossibility of forgiveness as shown through Polly and Mrs Ross, has emerged as a theme of series four. That, and the past coming back to bite you (or at least, to drink your gin and reject you). We last properly saw May Carleton and Mrs Ross in series two. This week, both were back. The first was looking for evidence that Tommy Shelby had changed, the second for vengeance.

The expertly tense tea party—a great action-thriller scene with gutsily intense performances from Paul Anderson and Lizzy McInnerny—took place under the irony of the framed biblical proverb hanging on Mrs Ross’ kitchen wall: “A soft answer turneth away wrath.” Neither soft answers nor wrath got Mrs Ross very far. “Do you think your repentance will mean you are forgiven of your sins?” she asked Arthur, summing up his character’s major existential conflict these past years. They were softer spoken, but her words contained no less rage than when she screamed “somebody has to stop you people” after pulling a gun on Arthur in series two.

Whoever does that won’t be her, now that she’s been threatened with a traitor’s tar-and-feathering should she stick around. Mrs Ross another in the long line of ordinary people made casualties of the Peaky Blinders. The Changrettas treated her no better, exploiting her grief to play their dangerous game.

Speaking of ‘Dangerous’, the race horse Tommy marched off to buy with his suitcase of money at the end of series three now has a name, and a fitting one at that. Tommy’s facing danger from every direction: Italians in the north, Italians in the south (for anyone keeping score, the Changretta count went down this week from thirteen to eleven), Communists, perhaps even his own family…

There’s still a lot of work to do before Tommy Shelby gets his recipe right, but in series four, Peaky Blinders has it perfected.