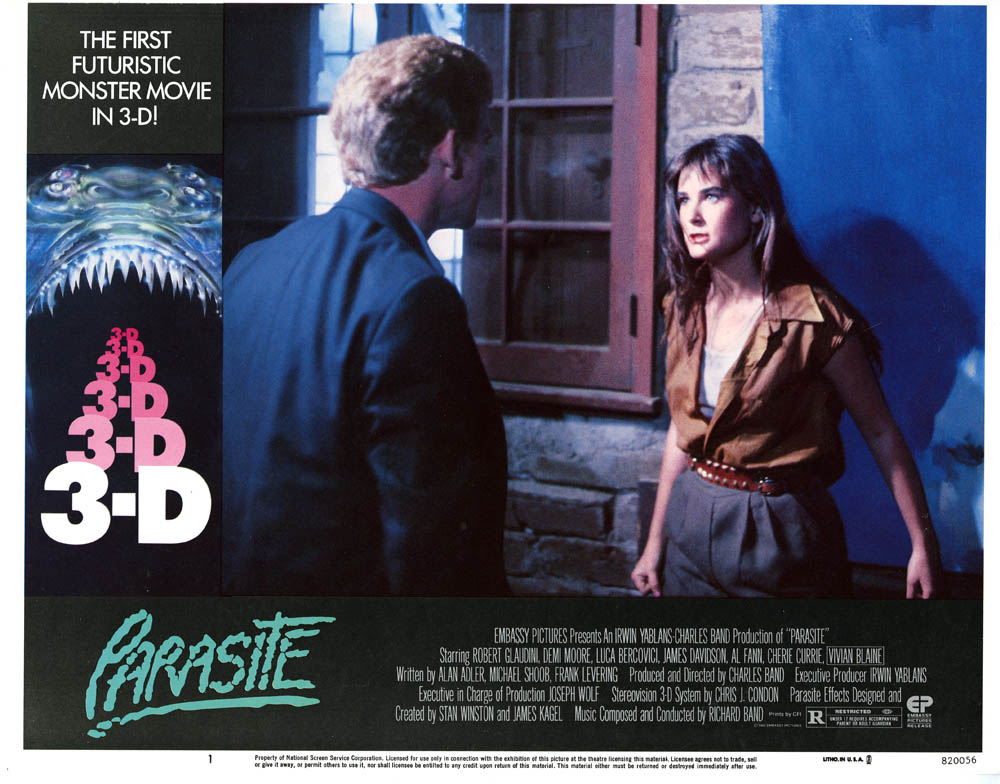 It’s Alien crossed with Mad Max, and Demi Moore plays a lemon farmer. We look back at the 1982 sci-fi horror, Parasite…

All Hollywood stars have to start somewhere, and there are plenty of A-listers with low-budget B-movies in their early histories. A teenage Leonardo DiCaprio made an appearance in Critters 3; Kevin Bacon was a memorable victim in the original Friday The 13th. Then there’s Parasite: a bargain-basement sci-fi horror that cheerfully slams together two popular 70s staples: Cronenbergian body horror and George Miller-style post-apocalypse. Oh, and Demi Moore makes her feature film debut as Patricia, who grows lemons.

In a dystopian near-future, a clammy, bug-eyed scientist, Dr Paul Dean (Robert Glaudini, who looks like a gaunt, desperately-ill relative of Jeff Goldblum) tinkers away in his lab. His life’s work is a biological experiment, carried out on behalf of a ruling corporation simply known as the Merchants. For unspecified reasons, the company has ordered Dr Dean to create a flesh-sucking parasite; having grown his monstrosities in metal container, Dr Dean suddenly realises that the creatures are far too deadly to fall into corporate hands, and so he tries to sneak them out of the lab. In the process, one of the parasites gets loose and infects Dr Dean, leaving him with a grotesque lump that writhes inside his stomach.

Rushing out of the lab with a second parasite still trapped in its container, Dr Dean heads across a desolate, dusty landscape to try to find a place where he can find a cure for his infection. Enraged, the Merchants send one of their elite assassins, a tall chap named Wolf (James Davidson) to retrieve their prized creature. All kinds of gory, economically-budgeted horror antics quickly follow.

Parasite’s an early film from genre auteur Charles Band, who’d later shoot to fame with such mini-franchises as Trancers and Puppet Master – all staples of the VHS era, if you can remember that. Made for just a few thousand dollars, Band’s film was released during that brief 80s period where 3D briefly came back into vogue in US cinemas, which is why, just like Friday The 13th Part III and Jaws 3-D, Parasite keeps poking the viewer in the eye with various objects – some writhing, most inanimate. Parasite opens strongly, with a wonderful, colour-drenched nightmare sequence in which Dr Dean, strapped to a hospital gurney, writhes and contorts until a big, nasty monster comes flying out of his head. It’s an eye-catching moment, and an important one, because it takes what feels like an eternity for the parasites to figure in the story again; until they do, the movie keeps its audience occupied with a series of brawls, snake attacks and inept laser gun fights.

The latter involves a topless lady in distress (a vital element in any bargain-basement 80s genre flick), an abandoned diner and a couple of grizzled hoodlums. When Dr Dean intervenes, with the help of his trusty laser gun, it turns out that the lady isn’t really in distress after all, and that the hoodlums – now dead – were actually her acquaintances. The fight over, we’re treated to a punishingly long close-up of a pipe sticking out of a dead guy’s stomach – all the better to enjoy Parasite‘s glorious stereoscopy. It’s all done in the best possible taste.

The creatures themselves – all grey flesh and sharp little teeth – might imply that Parasite is the latest in a rich parade of Alien rip-offs that emerged in the early 80s. Instead, Band seems to be reaching further back, to David Cronenberg’s classic debut, Shivers (1975): that movie saw a mad scientist create a parasitic organism that passed from host to host, hid inside stomachs or throats, and occasionally burst from bodies in dramatic fashion. Cronenberg has long argued that, when creating Alien, writers Dan O’Bannon and Ronald Shusett were inspired by Shivers. Whether that’s true or not, the loathsome beasts in Parasite are distinctly Cronenbergian – though Cronenberg would have at least thought of a reason why they were even created in the first place. Instead, Parasite goes straight for the gore – and while Band can’t afford to stage too many effects sequences, the handful we get are enjoyably icky. One of them sees a flirty land lady, named Miss Daly, attacked by a parasite while she’s applying makeup at her dressing table. A few dissolves later, and the monster explodes from her head like a gory jack-in-the-box.

Technically, the prosthetics effects can’t come close to Rob Bottin’s stunning work in The Thing (released the same year as Parasite), but then, they do have a magnificent pedigree – they’re credited to Stan Winston, who a couple of sequences with Bottin on The Thing and went on to work with James Cameron on The Terminator and T2. The creatures’ slow, shambling movements are still quite unsettling at times, thanks in large part to cinematographer Mac Ahlberg, better known for his work on Italian erotic movies – including one Fanny Hill. Ahlberg shoots his bloody set-pieces in long takes and lingering close-ups, like salacious love scenes beamed down from another planet.

Parasite’s best special effect is arguably Robert Glaudini, who staggers from place to place as Dr Dean. His line delivery may be stilted, but he really sells the film’s air of sweaty pestilence; if there’s much that’s original about Parasite, it’s that the plot spends so much time in the company of a male lead who seems so convincingly ill. His polar opposite is the fresh-faced Demi Moore, who suddenly appears around the half-hour mark. Dr Dean is sitting in a run-down bar frequented by a bunch of delinquents – who look as though they’ve wandered in from Walter Hill’s The Warriors – when she meets Moore’s Patricia, a local lemon farmer who’s dropped by to sell some of her fruit.

In time, Moore would, of course, find fame in such hit films as Ghost, Indecent Proposal and Disclosure. Here, Moore has the thankless task of looking mildly concerned while Dr Dean says things like, “There’s no cure, Patricia! Not without the other parasite!”, or fighting the villain, Wolf, in the middle of a vegetable patch. Patricia’s arrival, and her oddly specific vocation, led your humble writer to assume that her lemon farming might have some bearing on the plot. Throughout Parasite’s second half, lemons make a subtle yet insistent appearance, usually in fruit bowls dotted around the otherwise sparse interiors. Could it be that the Dr Dean’s vicious monsters can be killed with a squirt of tart citrus? Not a bit of it. It turns out that the parasites can be evicted from their hosts with a decent blast of unpleasant sound and then finished off with a dowsing of flames – much like any other living critter, really.

Like Patricia’s lemons, the post-apocalyptic setting doesn’t add up to all that much, either: in George Miller’s seminal Mad Max, the breakdown of society is a vital part of the story’s fabric; Parasite’s dystopia feels more like a means to an end. Shooting the film in an abandoned diner, Patricia’s farmhouse and Miss Daly’s dilapidated bed-and-breakfast is an awful lot cheaper than creating some benighted, Blade Runner-style future, after all. (The most expensive thing in the entire movie appears to be Wolf’s vehicle of choice – a ‘futuristic’ Lamborghini Countach, clearly loaned to the production by a local car dealership, since it never gets so much as a scratch on it.)

Then again, there’s something quite enjoyable about all the arbitrary elements thrown into Parasite’s pot: Luca Josef Bercovici, who plays a gang member with the Miller-seque name Ricus, is great value, even if he doesn’t get to do much; likewise Al Fann, who plays a bar keeper and waves a shotgun around. Most of the other characters are here to play the incubators for the slug-like monsters. (Look out, too, for a brief appearance from Freddy Moore, Demi’s then-husband and member of obscure band, The Nu-Kats.) Parasite was a surprise hit when it came out in 1982, and its success allowed Charles Band to set up Empire Films, which briefly became a successful mini-studio off the back of such genre hits as Trancers and Re-Animator. Curiously, Band never followed through on his plans to make a sequel to Parasite – perhaps because other, more promising movies took its place.

Today, Parasite‘s may be best remembered for Demi Moore’s appearance, but there are other movie connections, too. Bercovici went on to write and direct horror-comedy oddity Ghoulies for Charles Band, which in turn spawned a whole franchise. Later in his career, Bercovici served as production supervisor on A Good Day To Die Hard, of all things. The luckless Miss Daley, meanwhile, is played by Viviane Blaine, who in her Hollywood heyday starred in such glitzy musicals as Doll Face and Guys And Dolls. It’s a curious thing to see a studio star being ravaged by a latex parasite, but that’s what makes these movies so fascinating: they’re the dusty crossroads where upcoming stars and actors in the twilight of their careers quietly pass one another. The great character actor Rod Steiger played a mad scientist in little-seen oddity, The Kindred, alongside a 20-something Amanda Pays. Halloween: The Curse Of Michael Myers paired a pre-stardom Paul Rudd with Donald Pleasence.

In Parasite, we get to see the stars of Guys And Dolls and GI Jane come face to face with a rubbery monster and a bowl of lemons. If nothing else, the film speaks volumes about the strange places an actor can wind up on a long Hollywood career.