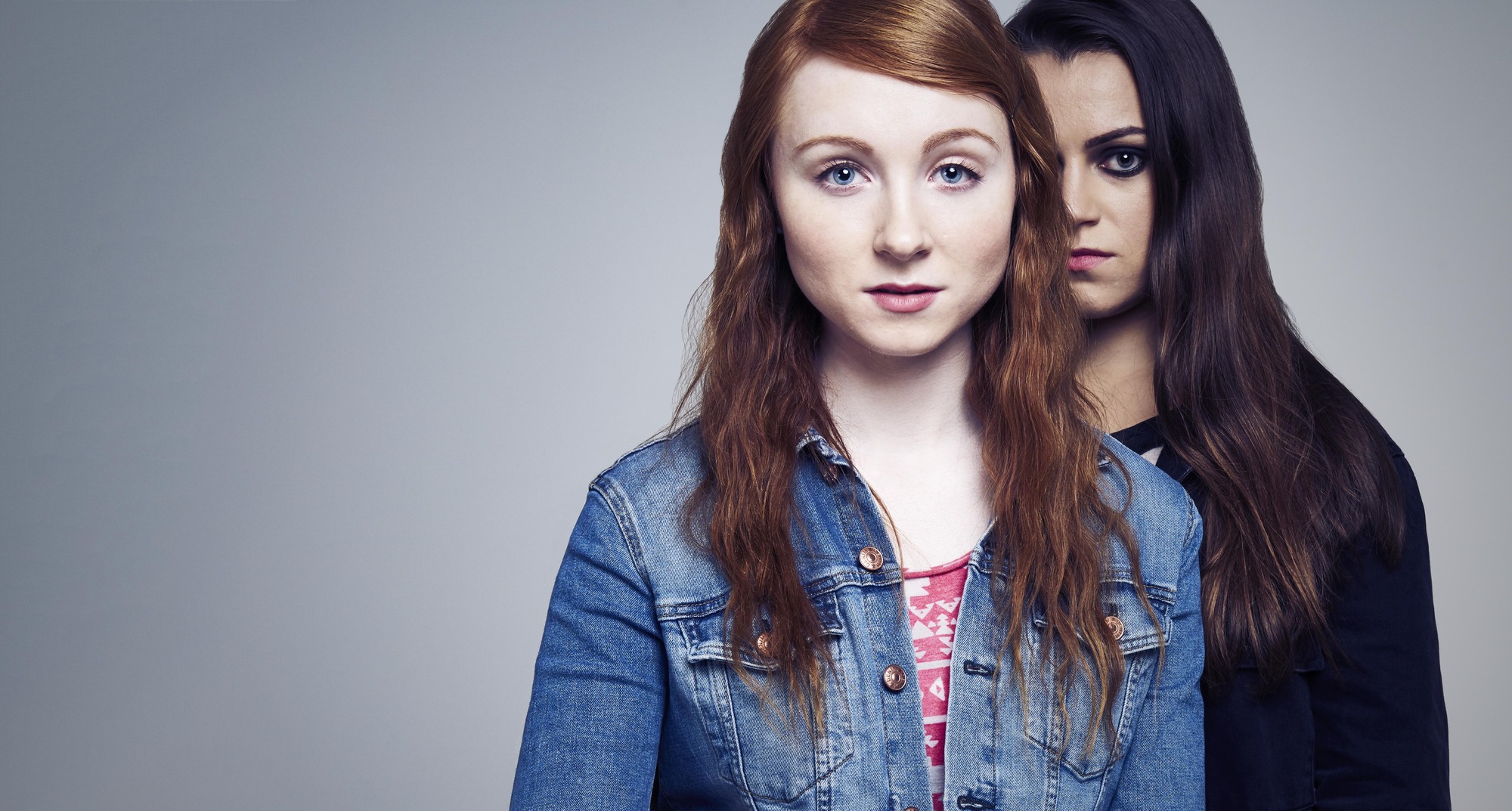 Google ‘depression’ and you’ll see arty, metaphorical line drawings of people cradling their heads, usually in silhouette, usually in the rain. Bipolar disorder has the on-the-nose shorthand of happy/sad theatre masks. Post-traumatic stress disorder, helpfully or not, has cornered the market in blindfolded soldiers screaming.

Whatever the clichés, all those images foreground mental anguish and not its symptoms. Nobody would illustrate depression with a picture of an untidy room. Depicting anorexia through part of its physical expression is similarly inadequate.

There are a few reasons it happens. Grotesque curiosity about the human body is one. Even more grotesque, the long-held association of extreme thinness with glamour (female celebrities, often Photoshopped beyond recognition, are the other category to appear alongside concave stomachs and jutting ribs in an anorexia online search) is another. A third is simple ignorance. To those without direct experience of the illness, it might be assumed that anorexia starts and ends with food and a desire to be thin.

Overshadowed, a BBC Three drama written by Eva O’Connor and directed by Hildegard Ryan, does valuable work in expanding that definition and our understanding of the illness. Through the story of Imogene (Michelle Fox), an A-level student and vlogger, it opens a window onto the inner experience of anorexia. It depicts a disease that doesn’t only threaten Imo’s health, but also seeks to destroy her relationships. We watch as anorexia isolates Imo, warps her better instincts, and manipulates and bullies her into ignoring the people who love her. It presents itself as her trusted confidant and cheerleader, while, you know, trying to kill her.

Overshadowed’s masterstroke is its personification of the disease. Writer Eva O’Connor, whose own experience as a recovered sufferer of anorexia informs this story, plays Imogene’s constant companion, Anna. When Overshadowed was a stage play, O’Connor’s fantasy character wore a flesh-coloured bodysuit and spoke only in rhyming couplets, but those excesses have been stripped away for the TV adaptation. Here, Anna could be just another of Imo’s schoolmates. Yes, her comments have a cruel streak and her dedication to Imo’s new fitness regime feels less than friendly, but it’s not made immediately clear what she is and what she’s doing. To begin with, Anna seems supportive even. “Go, girl,” she tells Imo, jogging alongside her on a 5k run, “you’re going to feel so good afterwards. No pain, no gain.” Then you notice the smirk on Anna’s face whenever Imo criticises herself. “There’s just so many things about myself I need to change,” says a distressed Imo in episode one. Instead of comforting her, Anna smiles. Stick with me, she promises and “you won’t even recognise yourself.” That line is powerfully telling about the experience of anorexia. It’s a mental illness that aims for self-abnegation; it makes you want to turn yourself into someone you don’t recognise.

There are cleverly elastic lines like that one throughout Overshadowed’s eight short episodes (taking the form of vlogs, each instalment is just ten minutes long). O’Connor is skilled at extracting the common usage phrases that reveal Imogene’s desire for self-obliteration. “I’m going to [exercise] until I sweat so much I forget who I am,” Imo says in one video.

The writing is especially strong on how modern self-help speech and the trend for so-called clean eating can disguise this particular mental illness. Filming her lifestyle vlog, Imo introduces her new fitness plan and presents “the new me” to the camera. “Exercise is empowerment,” she sings. She talks about protein, goes vegetarian and gives up carbs, all in the name of the unimpeachable impulses of feeling good and being proactive. She leaves a shopping trip with her younger sister without any purchases, telling herself, “My life is cluttered enough as it is, I do not need any more shit. I just need to minimise”.

Like Anna, whose shadowy hooded figure haunts Imo, flashing up in the back of shot then disappearing horror movie-style, the subtext is ever-present. Go back to rewatch Imogene’s cheery opening monologue after finishing the episodes, and the clues are all there. Through smiles and silliness, Imo tells her audience, “things are actually a bit mental at the moment”, citing “loads of stupid exams coming up at school” and her dad’s imminent remarriage, the result of an affair the previous year. The first impression Imo makes might be of a fun-loving, smiley teen, but underneath, she’s sensitive, extremely self-critical, under academic pressure and suffering from her foundations being shaken by her dad leaving. She’s insomniac and describes herself as “totally alone.” All that makes her vulnerable to a mental illness that finds footholds in already fragile places. Imo doesn’t starve herself and exercise compulsively to be as thin as a fashion model, she’s deeply unhappy and wants to feel a sense of power over her life. As she explains to love interest Wayne in a later episode, “It’s just a control thing.”

That’s a rare moment of self-awareness from a character who is lied to by her disease and who spends most of the series lying to herself. Overshadowed’s portrayal of what Anna gives Imo feels new and unflinching in its honesty. She provides her with comfort, insinuating herself into Imo’s personal space with sinister affection. She nuzzles into her, wrapping her arms possessively around her, stroking her and doing everything she can to make Imo distrust her family and friends and believe what she’s doing is okay. “I want what’s best for you” Anna says, “I’m always here for you” she tells Imo, while trying to starve her to death.

Overshadowed is just as smart in its construction as its writing. Because Anna only exists inside Imogene’s head, every scene with her (which is most of them, if she’s not hanging off Imo, Anna’s lurking in the background, watching) still works if you mentally subtract her dialogue. The vlogging conceit has been woven into the story, and Imo’s compulsion to document her life is neatly linked to her obsessive behaviour and illness. Any contrivance required by the first-person perspective is easily forgiven. For anyone discomfited by the glamour problem of past anorexia dramas (tellingly, on camera, it’s tricky to separate young women who are extremely thin because they’re very ill from young women who are extremely thin because they’re fabulous), Overshadowed is conspicuously responsible. There’s no opportunity for sufferers to pick up tips or inspiration here.  Calorie counts aren’t cited, scale read-outs aren’t shown, there are no close-ups on jutting bones or knobbly spines. Viewers couldn’t compete with Imo’s weight if they tried because it isn’t revealed. What you’re shown is someone in great pain, diminishing before your eyes.

It’s deeply upsetting to watch, but serves a real purpose. Overshadowed offers insight into what this disease can feel like from the inside. It educates those who may not have otherwise understood why somebody would feel compelled to behave as Imo does here. And with the image of Anna, dressed in black, a shadow pouring poison into a sufferer’s ear, it provides anorexia with an honest and meaningful visual metaphor, no salads or ribcages in sight.

Ultimately too, its message leaves viewers with hope. Recovery is real and it’s possible for everybody, says O’Connor, who knows that first-hand. Don’t give up.

Places to get help:

Overshadowed is currently available to watch here on BBC iPlayer.