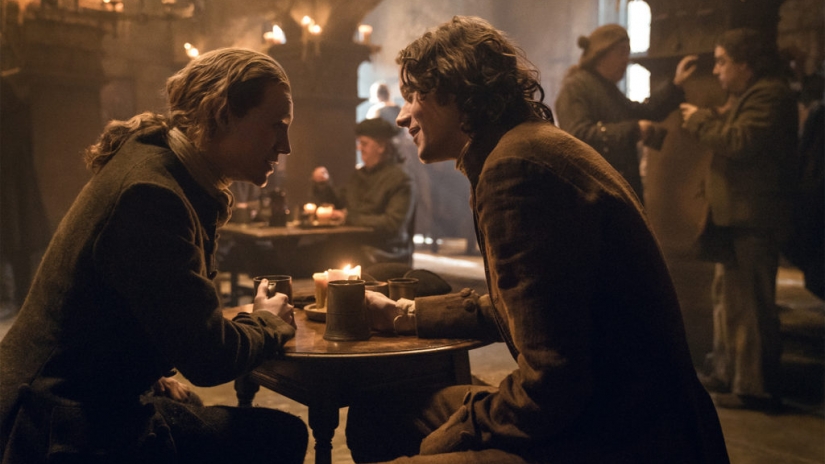 Outlander delivers a plot-driven chapter tonally discordant with what came before. Spoilers ahead in our review…

You have to give Outlander credit. It is not interested in playing the ‘will they or won’t they?’ game, something relatively unheard of in TV romance. A lesser show might fall into a cliched tension based on whether or not Claire and Jamie will work things out. Not Outlander. Only an episode after Claire’s return to the eighteenth century, they’ve recommitted to one another.

Unfortunately, Outlander replaces last episode’s delicious tension of their reunion with plot-driven shenanigans with little emotional resonance behind them. While I was genuinely on edge during Young Ian’s pitiful attempts to escape from the print shop fire, Creme De Menthe moved about a mile-a-minute, throwing plot point after whiskey-smuggling plot point at us in an episode that generally cared far more about minor characters than the viewer did.

By the time the print shop sign lay burning on an Edinburgh street, I mourned not the loss of Jamie’s mostly above-board business, but rather the fact that we never really had a chance to care about it past The Big Reunion Scene. For a show that manages to avoid so many of the TV cliches in its various genres, this episode fell privvy to far too many lazy storytelling patterns. From Young Ian’s sexual explorations to the death of Claire’s assaulter to Jamie’s Herculean rescue of Young Ian, Outlander phoned it in with some redundant, slapdash storylines.

What did work well was Claire and Ian’s reunion and Claire’s subsequent confrontation of Jamie for having lied about Young Ian to his obviously distraught father. Firstly, we care about Claire and Ian’s relationship — not only because it has built across many episodes, but because Jenny and Ian saw just how broken Jamie was after Claire’s presumed death.

That being said, if I have to hear Claire tell one more person her terrible excuse for leaving for a few decades without them getting angrier, then my eyes will roll right out of my head. It’s a tough pill to swallow and one that undermines the characterisation of every character who takes it in without comment.

The episode ended with quite a emotionally-driven cliffhanger. Not only is Jamie potentially wanted for sedition, but he also has a secret wife. Something tells me that this isn’t as bad as it looks, but the choice to end the episode with it was emotionally manipulative and frankly beneath this show. Outlander may avoid the ‘will they or won’t they?’ cliche with aplomb, but Creme De Menthe proves it’s not immune to other plot cliche traps occasionally.

Read Kayti’s review of the previous episode, A. Malcolm, here.