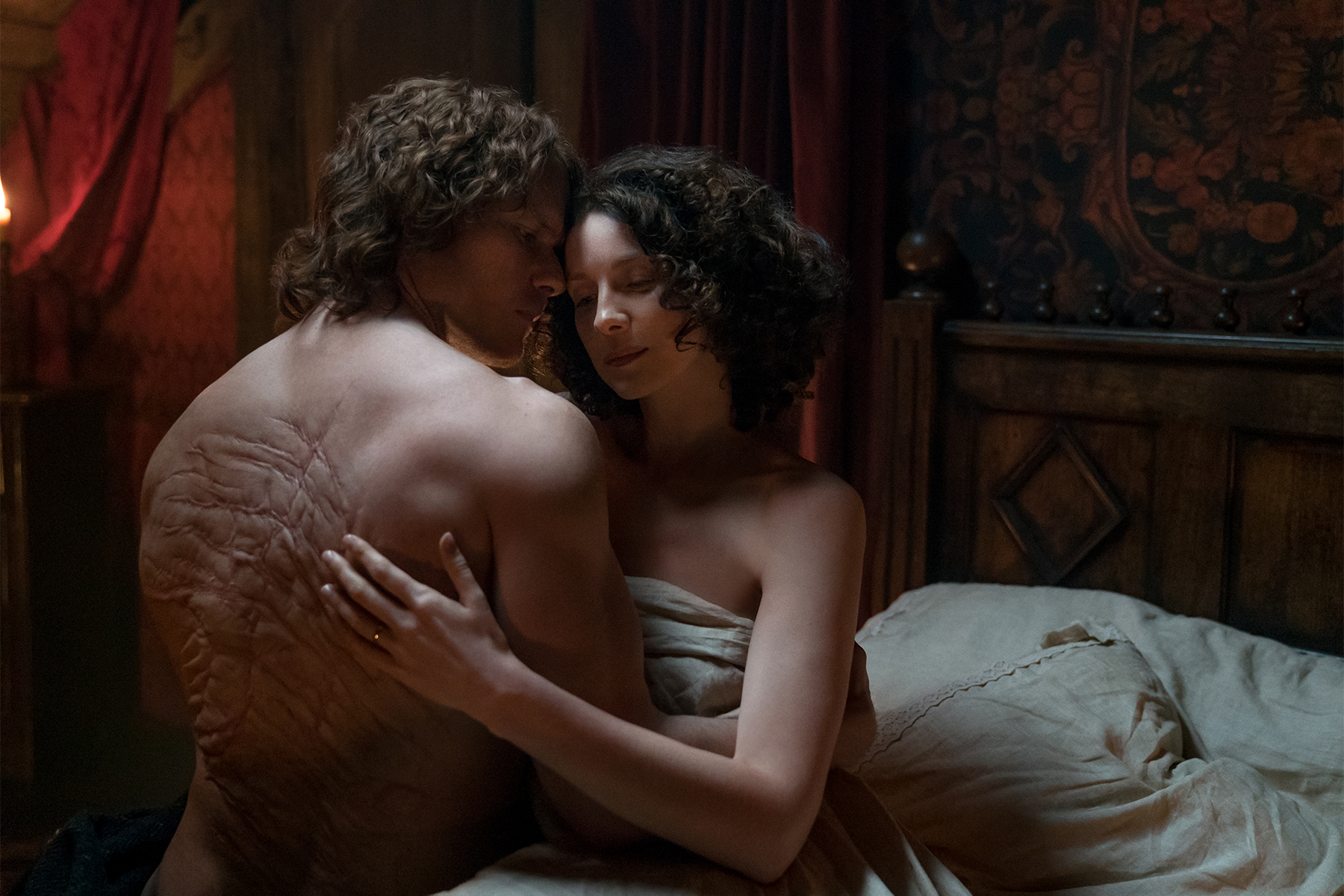 Claire and Jamie are reunited in an extended Outlander episode that explores the difference between love and intimacy.

Time is an unpredictable thing. Sometimes, it steals things from you that you can’t get back — emotions of a younger self your older self can no longer feel. Other times, it respects the most precious things you have, the feelings that have come to define you, and lets them endure.

Claire and Jamie’s love falls into that second category. When they come together after two decades apart, both are nervous that the love they still feel will have faded in the other. We, as viewers, know this is not the case. We have seen these two struggle to live their lives apart. However, Jamie and Claire have no such luxury. They do not know they are two halves of an epic love story.

In coming back through the stones, Claire was not just taking a risk that she would even be able to find Jamie; she was taking a risk that, if she did find Jamie, he would still love her.
“A. Malcolm” doesn’t start exactly where the previous episode left off. No, Outlander lets us squirm just a little while longer. Instead, it takes us back to the morning of Jamie and Claire’s reunion to show us the print shop scene from Jamie’s perspective. In doing so, we learn more about the life of Alexander Malcolm.

Jamie’s life as Alex is that of a bachelor. He rents a room in a brothel (though doesn’t partake in the services) and has a dangerous business as part printer, part smuggler. As we learn later in the episode, Jamie smuggles alcohol from other parts of the world into Scotland. Still, while Jamie’s life has its risks, it is relatively low key. He doesn’t have the same emotional risks, it seems, when it comes to his relationships.

Claire returning changes all of that. At first, it is understandably awkward between the two. Claire and Jamie still fit, but that doesn’t mean they remember how to align the pieces. It takes time, but, for one, time is one their side. They spend the day together, afraid to let the other one out of their sight.

Claire delights in learning about Jamie’s world — the one that will presumably become hers, as well. There is a vivacity to her demeanor that was missing when Claire was in 20th-century Boston. Jamie may be her chief reason for returning to the 18th-century, but she is allowed to be free here in a way she was not within the rigid social structure of 1950s upper class suburban Boston. You see it in the scene where Claire talks to the sex workers in the brothel. They assume she is one of them and Claire delights in the misunderstanding, finally freed from the constraints of “proper” behavior to act however she chooses. (Until Madame Jeanne LeGrand finds them, at least.)

Once Claire and Jamie have addressed some of the major points — especially Brianna, Willie, and their shared interest in continuing a relationship — they fall into bed, exploring one another in a way they have been unable to during their period of mutual cross-temporal angst-ing. Their bodies are maps for the missing years. This is where Jamie was stabbed during Culloden. This is how Claire hasn’t changed.

It’s a tentative courtship in many ways, one the demonstrates how love and intimacy are two different things — a somewhat novel concept, as too many TV shows and movies conflate love, sex, and intimacy into one package deal. Claire and Jamie know they love another still, but that doesn’t mean the intimacy is still there. It must be rebuilt, and that can only happen over time. In nights like these ones and days spent arguing and joking. In a life, shared.

But how easily will Claire be able to be integrated into Jamie’s life? Like I said, it is a life built for one. Jamie may have confidantes, but he does not have a partner like Claire would need to be. When it comes to society appearances, there is the issue of Claire’s absence, which she seems happy to explain away to those who ask with a story about going to America and thinking Jamie dead. But how will that affect the opinions of the people in Jamie’s life? In the moment, Fergus was simply happy to see “m’lady,” but will he feel a sense of abandonment over Claire’s extended absence?

However Claire may or may not integrate herself into Jamie’s life, his criminal activity is already affectig her. The episode ends with Claire violently confronted by someone looking for Jamie — no doubt someone having to do with his illegal ventures. The man threatens to rape Claire unless she gives up Jamie’s secrets, things that Claire herself doesn’t even know.

It’s upsetting to see Outlander fall so casually into another scene of sexual violence — or at least the threat of it. For the second week in a row, Outlander ends on an emotionally-manipulative cliffhanger. For now, one thing is certain: time apart has not quelled this romance. However, that doesn’t mean Claire and Jamie’s path to reintegrating their lives will be free of complications.