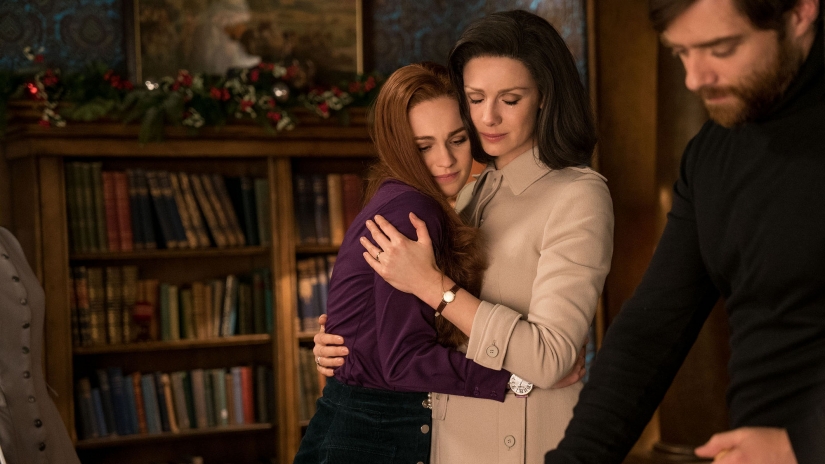 Outlander leaves its fans on a tantalising note in the latest season 3 episode. Spoilers ahead in our review…

Damn you, Outlander. Why aren’t you a TV show that drops all of its episodes at once? Why must we wait another week to see the rest of the print shop scene? If you need me, I’ll be living a half-life until Episode 6.

Only last week, I was bemoaning the lack of Claire in the story. This week, in Freedom & Whisky, we’re solely in her timeline (save for that ending) and back in her head, with a choice voiceover or two comparing time travel to a trip to the moon. It made for a story specificity that has been missing for much of this season, and a thematic specificity as both Claire and Brianna struggled to return to their lives after a life-changing summer in Scotland.

For Claire, returning to Boston means being back in her element. But what does that mean exactly when her “element” for the past twenty years has, yes, been badass surgeon and mother, but also a woman living a half-life?

For Brianna, returning to Boston means throwing herself back into life at Harvard, but what does that mean when Brianna had failed to understand the most basic facts of her life? Bree is doubting everything: her commitment to school, history as a discipline, and whether her parents ever truly loved her. In some ways, Bree has matured since we first met her at end of last season. In other ways, she is still a kid who needs serious reassurance.

This is why Claire has such a hard time leaving. Because, while Bree thinks she doesn’t need her mother anymore, Claire knows better. She knows what it’s like to live without someone you don’t need, but nonetheless want to be there. When an adorably bold Roger shows up with the secret to Jamie’s location back in the 18th century, Claire asks him not to tell Brianna.

Instead, Claire herself eventually tells her daughter, spurred by Brianna’s reminder that they promised no more lies. And, besides, it’s Christmas and, according to Love Actually, that means you have to tell the truth. So Claire ‘fesses up about Frank’s girlfriend, Sandy, who approaches Claire at a Harvard dedication ceremy for Frank to tell Claire that she was a terrible woman for never letting go of Frank.

Frankly (pun!), it’s a dick move. Frank was his own man who could have left Claire at any time (and believed Claire at her word when she promised never to take Brianna away from him). But, I guess Sandy is grieving, so we can cut her some slack? Anyway, her real role is much more thematic. When Sandy explains to Claire that Frank was the love of her life and she would do anything to have just one more day with him, Claire is reminded of what that kind of desperation feels like. She is reminded that, though Sandy may ever have the chance to see Frank again (which is sad), Claire does have the chance to see Jamie.

Fortunately (for this show), Bree convinces her mother to go, explaining that she’s totally an adult now and so she doesn’t need her anymore. (I’d just like to say that this has not been my experience.) But Bree is trying to be strong and stoic and put her parents’ interests ahead of her own. She’s like Jamie in this moment, making Claire walk through the stones so his family has what he thinks is their best chance at living a full life.

Claire goes into montage mode, DIY-ing her way to a gorgeous, tailored, period-appropriate outfit complete with all of the pockets ever and rain-resistant capabilities. I’m calling bullshit on Claire being this skilled a seamstress, but, whatever, it makes for a great sequence. Besides, Claire needs a place to fit all of her Christmas gifts from Roger (who, yes, is still there) and Bree.

Let me take a moment now to pay tribute to Roger MacKenzie because, while this episode — and this journey — has mostly been about Claire and Bree, Roger’s been along for the ride, demonstrating his emotional intelligence, his sage advice-giving, and his impeccable taste in 1960s television. When Claire gets ready to leave, it’s Bree who she is leaving behind, but that doesn’t mean Roger hasn’t become part of her family, too. They accepted him into their after the Reverend died, when he needed a family, too. Two broken families, becoming something whole by needing one another.

Watching them celebrate Christmas together and, in a way, celebrate Claire’s departure (because if Bree doesn’t treat it as a celebration, she will break down and Claire will probably never go), is realising how these three have become their own little family unit. Claire is leaving Bree behind, but she isn’t leaving Bree alone. She has Roger.

But this is still Claire’s story (for now), which means we will follow her where Bree and Roger can’t: back through the stones, to Jamie. I’m glad Outlander didn’t choose to drag this out. Instead, they literally have Claire step out of a cab in 1960s Boston and into a puddle in 18th century Edinburgh. (I only travel by puddle now.)

Claire makes her way down the cobblestone Edinburgh street, slowly taking it all in. She doesn’t need to rush now. She told Bree that, this time, she wants the journey to be peaceful, and it is. Claire isn’t just returning to Jamie (though that may be her prime motivator), she is returning to this intersection of place and time. She is returning to Scotland.

Claire makes it to Jamie’s shop, an establishment that seems to be doing well for itself. It’s a good decision not to show us Jamie right before this because we miss him a little, too, after having gone almost a whole episode without. He’s not where we left him, which means we’ll get to experience hearing at least that part of the story along with Claire.

When Jamie calls out, thinking it is someone else, Claire is too overcome with emotion to say anything. Or perhaps she wants to live in this peace a little while longer, in this liminal space between the woman she was and the woman she hopes she gets to be again: the kind who lives with her whole heart.

We don’t get to be inside of Jamie’s head here, but we can guess what he sees when he sees Claire: a ghost. There was a time, right after Claire first left, when Jamie saw visions of Claire and he would respond to it with hope, only to have his heart broken. But, like Claire, he had taught himself to stop hoping, to stop believing in a life lived with his whole heart.

He faints. Because of course you would. Claire has had a lot longer to sort through her feelings about coming back here, about seeing Jamie again. She’s had time to plan everything (even if she really can’t plan everything), from the dye job to the outfit. Jamie has no such space, has no such peace. Still, the faint is pretty hilarious. I suppose I forgive you, Outlander, for ending the episode here. Just don’t stay away too long, okay?