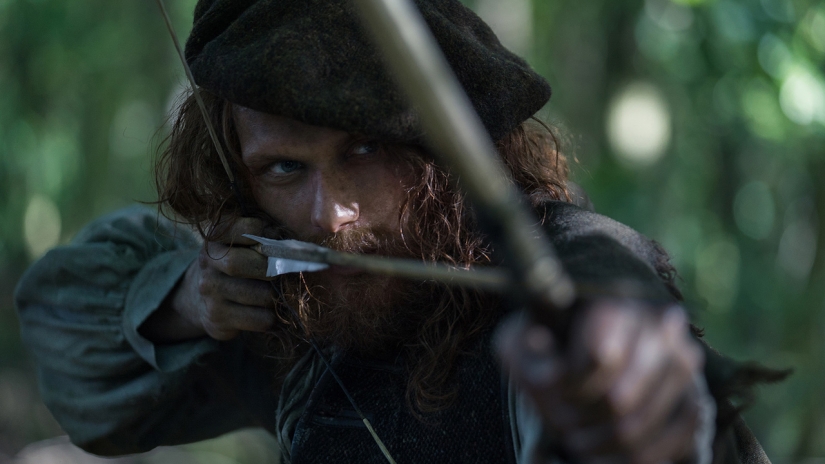 As Claire and Jamie continue to live apart, Outlander explores the many forms of emotional intimacy — from sex to friendship…

Sex scenes, like any other kind of scene in a TV drama episode, should be vehicles for expressing character. Unfortunately, they are usually the same, requisite formula that reveal little about the characters or the plot other than Yep, These Two People Are Having Sex.

In a pop culture age where more ways to watch TV drama exist — from premium cable to streaming services — this is slowly changing, as writers and directors create outside the rigid rules of network television and its Broadcast Standards and Practices. It’s hard to imagine Outlander, a show that uses sex scenes in new and different ways — and, above all else, to express character — existing in an earlier TV time. It would be one of its vital storytelling tools.

All of these sex scenes served a very specific storytelling purpose. For Claire, first, we see heartbroken over Jamie, pleasuring herself to his memory because it is the only way she can “be” with him. It is in this moment, however, that she seems to realise it is not enough. She doesn’t just want pleasure; she wants intimacy, and that’s something Jamie can no longer give her. So she tries with Frank.

At first, it all seems to be going well. The intimacy is already there in some, non-sexual way. They are partners raising this child, after all. But, in the heat of passion, Claire closes her eyes. She isn’t with Frank. Not really. By the end of the episode, the two are in separate beds. They may be partners when it comes to raising Brianna and in other forms of love, but it doesn’t seem they will be sexual partners any time soon. This is a decisive move, one that speaks volumes on a show that recognizes sex as a form of intimacy.

Much of this episode belonged to Jamie. Thus far, his storyline continues to progress at a different rate from Claire. In the season premiere, he was stuck in hours while Claire was stuck in months. Now, it is he who jumps ahead, having lived years in the mid-episode hiatus to Claire’s months.

Where do we find Jamie? Guys, it’s not great. He has really let himself go, not only physically in the form of a moppet-ed head of hair and an overgrown beard, but also emotionally. At one point, the always-welcome Jenny Fraser tells Jamie that, when the Red Coats come looking for Red Jamie, she doesn’t have to lie: she hasn’t seen her brother for years. He didn’t come back from Culloden, not in any real way. If the theme of this episode is emotional intimacy, then Jamie isn’t struggling to connect to the people around him, like Claire is; he’s not even trying.

Jamie’s lack of emotion connection with the people who love him is not only demonstrated in his relationship with Jenny, but also with Fergus, who continues to fight to bring Jamie out from behind his self-imposed wall of stoicism. He calls Jamie a coward (which is kind of true, even if you understand that the cowardice stems from some intense pain) and, when that doesn’t work, seems to get his hand chopped off by Red Coats just to snap Jamie out of it.

That’s a simplification of events, of course, but, at times, it does seem like Fergus exists as a character only so he can be tortured to further Jamie’s character arc. It’s a role that is usually given to female characters, but this is the second time in two seasons that something terrible has happened to Fergus seemingly only for Jamie’s character’s sake.

Here, when Jamie comes to Fergus and tells him that watching him get his hand chopped off reminded Jamie that he had something to live for (about time — maybe you could hav figured it out before your surrogate son was mutilated?) seems to be enough to make it all worth it to Fergus. He appears to be instantly cured of any PTSD and immediately accepts his new reality. That’s the kind of emotional maturity I wouldn’t expect from the most zen of fully-grown adults, let alone a child who has already been a victim of sexual violence.

Anyway, Jamie is jolted back into action, deciding to turn himself over to the Red Coats in order to keep Jenny, Fergus, and the rest of his family safe. The night before, Mary offers herself to him. It’s an interesting moment, one that plays into this broader, more diverse definition of sex. As Mary tells Jamie, not all sex has to be the passionate coming together between epic lovers, as it seems to be with Jamie and Claire. Sometimes, it is about two people who need human connection being there for one another.

But Jamie can’t hide away in this case forever, and the next day he shows up at Lallybroch at the appointed time. Jamie’s decision to have Jenny turn him in is one Jenny vehemently disagrees with. During their staged fight in front of the Red Coat soldiers, in which both siblings spew anger at one another, the only line that rang true was Jenny’s insistence that she would never forgive her brother for this. She didn’t mean joining the Jacobite cause, of course, but rather forcing her to turn him in.

This was an especially powerful moment. For me, the moments of emotional intimacy that rang truest came not in Jamie’s declaration to Fergus or in Jamie’s decision to sleep with Mary, but in his quieter breakdown to Jenny, earlier in the episode. Working through pain hardly ever looks handsome and composed, at least in my experience. Grief is messy. That being said, this episode’s Jamie never looked as at peace as he did in the moment when he was being driven away in shackles. This felt like a decision he had to make, even if it will haunt Jenny forever.

While facing the established authority’s form of “justice” was something Jamie had to do, becoming part of something bigger again was something Claire had to do, enrolling in medical school to become a doctor. For me, this was the strongest part of Claire’s storyline, and the most interesting. For Claire, being part of “something bigger” was not about romance or sex or even motherhood, but rather about helping people with her medical skills. It’s a powerful message for any show, but especially one built around romance.

Of course, just because it is the right decision for Claire, doesn’t mean it will be easy. As soon as she walks into the room for her first class, she is ridiculed and made to feel unwelcome not just by the other students, but by her professor, as well. She finds an ally in the one black student in the room, a man named Joe Abernathy. They become quick friends, another sign that, though Claire may not have the emotional intimacy of sex, she can have other, equally valid forms of emotional intimacy. Like friendship.

It doesn’t seem to be a coincidence that the first time we hear Claire’s voiceover in this episode is when she makes the decision to go back to school, finding a new outlet for herself. Claire has been missing her voice, struggling to remember who she is or to figure out who she is now, but now she has found it again. It is so nice to have her back.