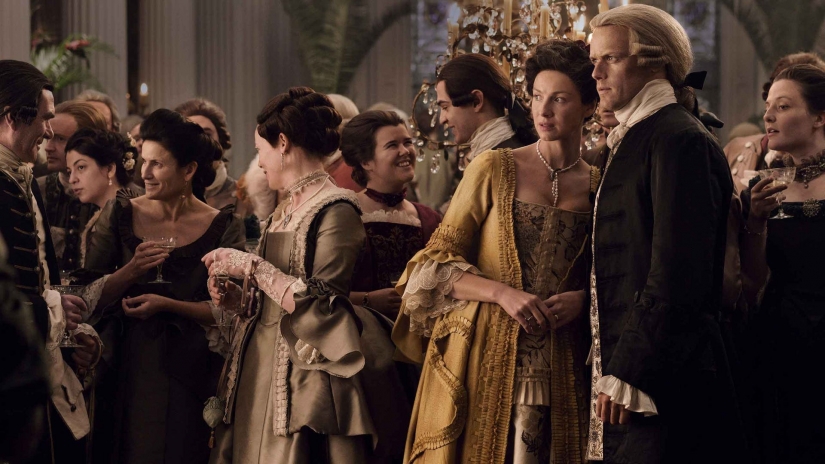 The latest Outlander episode is diverting stuff, but without much going on underneath the surface. Spoilers ahead in our review…

Have you ever gone to a party and it seems like everyone you’ve ever met is there? That was more or less the plot of tonight’s Outlander, which saw Claire and Jamie finally arriving in Kingston, Jamaica and getting serious about their search for Young Ian. This led our favourite couple to the house of the city’s governor, and to an extravagant gala… because what good is a period drama without an opulent party awkwardly built on the back of a slave trade to which the show’s protagonists half-heartedly object?

But I’m getting ahead of myself…

The governor’s party was a who’s-who of characters from Outlander days past, starting with the governor himself, none other than Lord John Grey. Lord John is ecstatic to see his old friend Jamie again, and Claire quickly understands that this young man who once needlessly defended her virtue near Prestonpans, has since fallen in love with her husband.

Lord John still wears the sapphire Jamie “gifted” him (as Lord John points out, Jamie actually surrendered the gem after returning from his escape), a reminder of their, um, friendship. It’s enough to make any viewer wish for a polyamorous happy ending… or maybe that’s just me? (If you’re looking for a period romance in which two men do fall in love, I highly recommend Mackenzi Lee’s delightful and hilarious The Gentleman’s Guide To Vice and Virtue.)

Aside from acting as a friend from Jamie’s past, Lord John also has news of Jamie’s son, Willie, who you may remember Jamie left in his friends care. Willie is doing well, says Lord John, and still speaks of Jamie sometimes—news that brings a watery smile to Jamie’s face. With Willie and Lord John’s wife, Isobel Dunsany, soon coming to Jamaica to join Lord John, this may not be the last joyous reunion in Jamie and Claire’s future.

The other major blast from the past was a much bigger surprise (well, if you haven’t read the books), and the namesake of this episode. Geillis Duncan, now Geillis Abernathy, is back, and she’s back to her old shenanigans. She is known as The Bakra, slang for a white person from Britain, and she is on the hunt for the sapphires that were in the Silkies’ Isle box, convinced that they can be used to predict the rise of the next Scottish king by Margaret Campbell, another familiar face.

It was Geillis’ men who brought Young Ian back from Scotland, as The Bakra “likes young boys.” Once he arrives, she gives a still throughly naive Young Ian some truth tea to make him talk about the missing sapphire (which we know is in Lord John’s care, but Young Ian only suspects might have been taken by his uncle). Geillis then proceeds to have sex with Young Ian, yet another incident in Outlander‘s pattern of sexual coercion involving a female aggressor and a male survivor, falling into the lazy trope that you can’t rape a man or boy because men always want sex.

Like Geneva Dunsany’s sexual coercion of Jamie on the show, Young Ian is presented with sex as the only way to avoid a terrible outcome. In Jamie’s case, Geneva threatened to reveal Jamie’s true identity. In Young Ian’s case, Geillis implies that she might kill him. Someone cannot give consent in these situations, and Outlander does nothing to delve into the complications of these moments, instead treating them as consensual sex scenes. It’s a problem this show needs to address moving forward.

Despite the problematic nature of her return, it’s always a delight to see the nefarious Geillis. While she may have saved Claire from burning at the stake that one time, she is far from a good person. She murdered her own husband back in the 20th century in order to get through the stones. While I like the ambitious nature of Geillis’ villainy, I wish her political identity were a bit more consistent. For me, it doesn’t follow that someone so obsessed with Scottish independence would have no problem with British imperialism, as represented here in the slave trade of which she is an active part. They are one in the same.

It isn’t particulaly surprising that Outlander does not have an answer for us here (and doesn’t even seem particularly interested in the question). It is a show that has its main character make a performance of objecting to the sale of humans being carried out right in front of her, but who doesn’t think to consult Temeraire, the slave Jamie buys for her, about the timing of his own dash for freedom. Instead, it is decided for him, under the guise of concern. Temeraire will not be released until they are far enough away from Kingston for him to be safe. Really, Claire and Jamie need him to get information about Young Ian.

It’s an attempt to make the book storyline more palatable and, like other attempts to do so, it falls short. This TV show would have to change a whole lot more for it to avoid completely its main characters actively supporting and benefitting from some pretty horrific aspects of whiteness and British imperialism. I’m not even sure it’s possible, at least without changing this story in some pretty major ways. (Let’s not forget. Lord John Grey is the British governor of Jamaica, actively instituting colonial rule.)

Rather than delve into any of theses issues, Outlander distracts with yet another problem for our protagonists. Captain Lenonard has arrived at the governor’s party, no doubt with plans to arrest Jamie. The Fraser party makes a dash for it, releasing Temeraire into the woods to join a rumoured group of escaped slaves (how amazing would it have been to follow Temeraire for part of this episode as he hung with the other slaves at the governor’s mansion and we got a different perspective on this world and this party?), and continuing on to attempt to rescue Young Ian from Geillis’ clutches.

They never get a chance to—well, at least Jamie doesn’t. Captain Leonard catches up with Claire and Jamie (man, that kid is good at his job), taking Jamie into custody. Our two star-crossed lovers are left separated again, with the fate of Young Ian still up in the air. It’s a diverting way to end a diverting episode, and representative of how much of this last Outlander story arc has been constructed: as diverting.

Since Claire has returned to the past, this show has been devoid of a larger purpose, so it has been left to make due with smaller ones: Find Young Ian. Reunite Claire and Jamie. Check in with characters for the past. Again, it makes for thoroughly entertaining television — this was a fun episode — but it also makes for a story that, once you look beneath the shiny surface, doesn’t have much going on below.