Only The Brave review 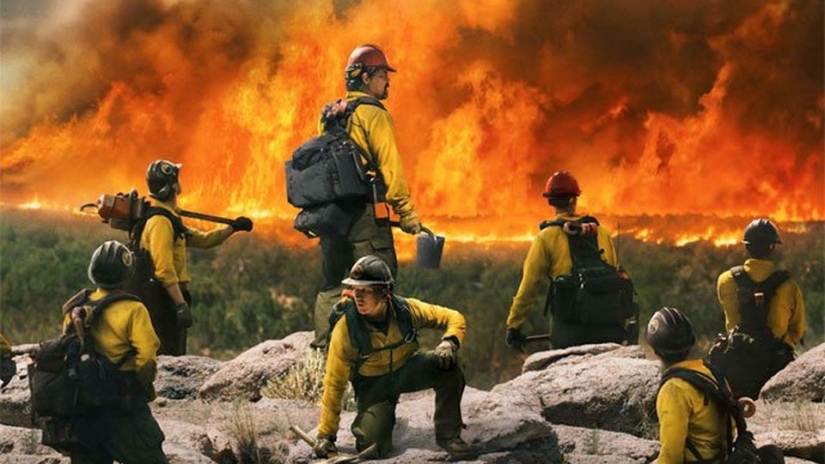 Following the template of sorts set by Peter Berg’s films Deepwater Horizon and Patriots Day, Only The Brave is another true story of genuine American heroes. It’s not clear from the start it’s a true story if you’re unfamiliar with the real life events behind the film, as instead, the movie gets going with introducing us to an ensemble bunch of frontline forest firefighters, who try to divert fires by, quite literally, lighting more fires.

The fire company is led by Eric Marsh, played by Josh Brolin, who gamely tries to outgruff Jeff Bridges, who in turn plays his boss. Marsh pushes for better resources for the group who become the Granite Mountain Hotshots, as their lives become engulfed by Arizona fire season, and the ongoing battle to keep flames at bay.

Not just physical flames, either. Family flames too. Against the backdrop of fire fighting are stories of a reformed felon, a horse or two, yearning for children and rivalry, some of which bubble up more than others. It’s all a little bit daytime soap in the way that it’s done, with extremely on the nose dialogue sometimes disguised by moments of genuine comedy. The film covers quite a period of time as a bunch of recruits come together under Marsh’s watch, though, and at times there’s a sense of an army training film. Director Joseph Kosinski certainly does a bit of a dry run for his upcoming Top Gun sequel in that regard.

He also excels in the fire sequences. Wisely opting to keep his camera far back and get across the scale of what the firefighters are up against, there are some really widescreen sequences here that get across the fast spread of the flames, and the extreme danger that the Granite Mountain Hotshots put themselves in.

Where Kosinski struggles is with the human stories. It’s odd to write this, given that the stories are true and the characters are based on real human beings. But they don’t often come across that way. Miles Teller in particular takes some time to get a handle on Brendan McDonough, the new recruit desperately trying to turn his life around and be a good father. Teller’s performance feels several notches below what he’s capable of, although he’s getting somewhere by the end of the film. Josh Brolin is a far more reliable pair of hands for the lead role, and even when he’s spouting clichés and expository dialogue that comes tattooed with signposts, he’s good value.

Jennifer Connelly doesn’t get much screen shrift as Brolin’s wife, Amanda, but she gets a fair better deal than Andie MacDowell, in a blink-and-miss-her cameo.

For Joseph Kosinski, this is an intriguing choice of third film, following the effects-heavy TRON: Legacy and Oblivion. But he comes up short on the human side. He’s not helped by a screenplay that covers a lot of time, tries to juggle quite a few characters, but is too often full of conversations between human beings using stilted sentences and unconvincing words. It hurts the human heart of the film, and it take the reveal that the film is a true story to give it proper resonance, resonance that the drama itself has failed to get across.

A disappointment, this, because it’s genuinely a heroic story that’s being told, about people who do far more vital things than sit and write reviews on the internet. It’s just not told very well.

Only The Brave is in UK cinemas from 10th November.