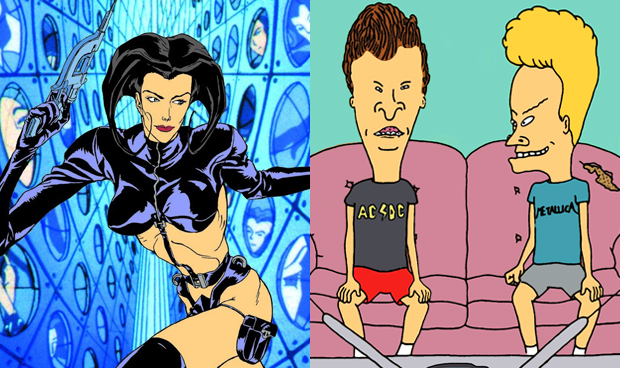 The entire run of the 1990s’ definitive animation showcase, Liquid Television, is now available to watch for free…

Those who come from a generation that can elegiacally recall the days when the programming line-up of MTV (Music Television) not only consisted of music videos, but thought-provoking cutting edge original programing, will likely remember late-night viewings of the cable channel’s bellwether mixed-media showcase, Liquid Television. While it’s not coming back anytime soon, a nostalgic boon has just arrived, making the show’s entire run available to stream.

Indeed, Liquid Television was the crucial 1990s platform responsible for the emergence of would-be MTV hit series Beavis And Butt-Head, along with the bizarre, ultraviolent and titillating assassin series Æon Flux, which, in 2005, would be adapted as a movie starring Charlize Theron. Now, the series has been made available for consumption in its originally-aired form, thanks to the folks at Internet Archive, who have uploaded the whole kit and caboodle, providing – with equally-nostalgic commercials and MTV News breaks – all 27 episodes from Liquid Television’s 1991-1994 run.

This is especially a big deal to those inclined to revisit or first experience Liquid Television, since the series has long been lost in the nostalgia boom. That is because the show has rarely been repeated on MTV or its sub-channels and its few-and-far-between VHS/DVD physical releases and bastardised YouTube uploads did not showcase the series in its pure form, since its status as an MTV series originally allowed it to make wanton use of licensed music. Thus, in a predicament similar to releases for its Mike Judge-created offshoot series, Beavis And Butt-Head, much of its context and quintessence was lost in time, at least until now.

Besides biggies like Beavis And Butt-Head and Æon Flux, the avant-garde variety showcase of Liquid Television included other recurring segments such as The Specialists, Brad Dharma: Psychedelic Detective, Invisible Hands and even live-action segments such as Dog Boy, which featured a male hero who sports a transplanted dog heart in his chest. In another noteworthy factoid, the initial Beavis And Butt-Head  segment, which aired in season 2 on September 24, 1992, spawned the catchphrase ‘Frog Baseball’ (distasteful as it may now seem, hitting frogs with a baseball bat), which became an early t-shirt-spawning meme for the property.

After Beavis And Butt-Head broke away from the showcase in early 1993 to resounding pop-culture-invading success, Liquid Television would manage to spawn a spinoff showcase starting in 1994, called  MTV’s Oddities, which focused on the colossal-cranium-sporting character  The Head (who would eventually take over the series), as well as the acclaimed animated adaptation of Image Comics’ Sam Kieth-created title, The Maxx.