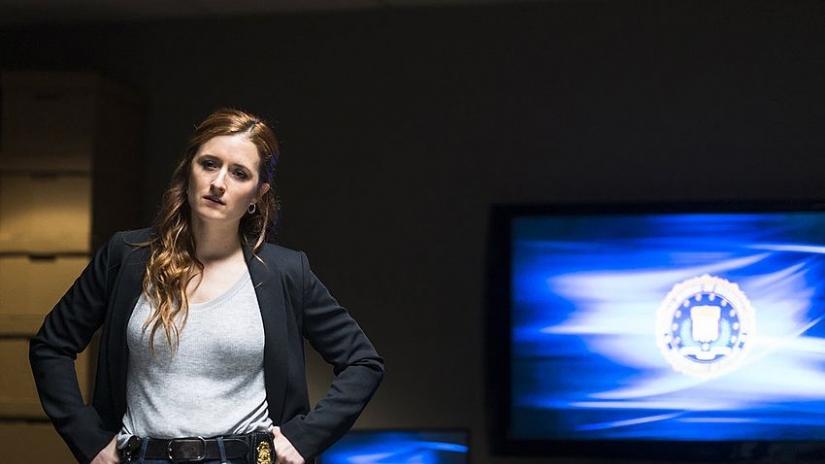 The Dark Army strikes back on an upsetting, excellent episode of Mr Robot. Spoilers ahead in our review…

“They’re actually going to get away with this,” Dom whispers to herself at the end of Fredrick & Tanya.

She’s right. The Dark Army is going to get away with it. Whiterose has achieved her precious annexation of the Congo. 71 E Corp buildings have been destroyed, along with at least 4,000 people dead. Elliot and Mr Robot are defeated, their people’s revolution is torn to ribbons, each one of those ribbons picked up to be co-opted by yet another 1% puppet master. Trenton and Mobely are dead, framed for the E Corp building attacks. Angela is a time-travelling vegetable. It’s all over.

Even Philip Price, who until this episode we would have delighted in seeing defeated, is unambiguously destroyed professionally and it’s devastating.

“You had to destroy so much. Why?” he demands to know of Whiterose as they sip cocktails in Mar-a-Lago’s tacky ballroom.

“Because Philip. I had to ask you twice,” she says.

Fredrick & Tanya closes out the mini ‘Dark Army Triumphant’ trilogy that was opened by Runtime Error and then continued in Kill Process. The three episodes represent the bleakest hours of Mr Robot yet. They’re also the show’s single best sustained run since it began. Runtime Error through Fredrick & Tanya is basically Mr. Robot’s The Empire Strikes Back. The good guys lose, the bad guys win and the only prayer we have for justice is that the series isn’t over yet. Elliot didn’t lose a hand but I’m sure he would have traded that hand for those 4,000 souls and Angela’s sanity back.

Historically, the appeal of so much of Mr Robot has been that we have no idea what the fuck is going on. The entire premise of season 2 and parts of season 1 is that we can’t fully trust what Elliot’s seeing. In Fredrick & Tanya‘s quest for clarity, it opts to remove Elliot entirely.

There are no parlour tricks in the episode, save for its devastating conclusion in which Sam Esmail fudges the timeline so it looks like Trenton and Mobely are on the verge of rescue when in reality they are long dead. Beyond that, there is no almost no Elliot whose perspective we’ve grown to mistrust. After he rushes to Christa’s office, Mr Robot takes over the narrative. That means that everything we see after is 100% conclusively real. Our eyes into these events are the rock-solid Mr Robot, Dom, and Darlene.

One would think that some clarity would take away from the enjoyment of Mr Robot. We’ve grown so accustomed to playing Esmail’s Fight Club games. How could the reveals in Fredrick & Tanya live up to the twisty narratives we’ve built up in our head? Whiterose isn’t a saviour, she’s just another 1% puppetmaster who knows how to pull the strings better than the other artists. There really isn’t any hope for actual time travel. That was just a lie sold to a brainwashed Angela. And there isn’t even really an fsociety anymore, if there ever even was.

The people’s technocratic revolution had long ago been co-opted by more powerful forces and for what? So that Whiterose could make a point, get some more space for her nuclear facilities, and so the rich elite can keep their rooftop party going even as the world burns around them and the mistress’s dead body rots in the guest bathroom.

This is the clarity we’ve been asking for. Well now it’s here, and it’s about as ugly as we could have expected.

Clarity shouldn’t work this well on Mr Robot. The audience has been conditioned to be fucked with. And then once the artifices and the games have all been lifted, the truth we’re left with is the one that was the most easy to guess: rich people doing bad things.

How could this possibly work? It just does. Maybe while Mr Robot was conditioning us to accept narrative tricks and obfuscation, the real world was conditioning us to accept that revolutions are always co-opted and money always wins. I’m still not sure why Mr Robot chose right now, halfway through season 3 to put all its cards on the table as opposed to say the beginning of the season or the end of last season but it’s hard to argue that it possibly could have chosen a better time.

It helps of course, that as Mr Robot sets up its presumable ‘Everyone vs the Dark Army’ end game, it remains as devastatingly stylish as usual.

If there is an archetype that this show has absolutely nailed, it’s the charismatic fixer. The best moments in Fredrick & Tanya are the ones we share with Leon and Irving. Leon (Joey Bada$$) makes his return to the series (he had previously appeared in Legacy in a flashback) as prophesied in the season 2 finale’s post-credit sequence. He remains as charming and weird as ever.

The episode smartly spares us the details of much of what happens after he asks Trenton and Mobely for the time and launches right into their experiences as his captives. It’s an experience that looks like a shocking amount of fun! Leon has moved on from Seinfeld and is now more interested in Frasier and Knight Rider. Thankfully, his Knight Rider experience runs into the opening credits so we get to hear those iconic bars.

When Leon passes Trenton and Mobely onto the Dark Army, it’s equal parts disturbing and sad. This is certainly the last we’ll see from Trenton and Mobely and it might mean the last we see of Leon. Let’s hope he eventually makes it to the Parks And Recreation era of NBC comedy programming.

After Mr Robot takes over Elliot’s body, he guides us to another worthwhile interaction with our other favorite fixer. Mr Robot tries to confront Irving at his auto body shop but gets knocked out for his troubles and taken to outside a rooftop party.

Bobby Cannavale as Irving remains an absolute revelation this season. His carefully measured monologue about the rich wanting to keep the party going offers up such a perfect visual and narrative representation of why the Dark Army has engineered all of these events.

Each of the three most recent Mr Robot episodes have felt monumentally consequential and it’s hard to view Fredrick & Tanya as anything other than the conclusion to a particular era of the show. Evil has won. Santiago’s influence at the FBI has assisted in establishing Tyrell Wellick, Trenton, and Mobely as believable patsies. All the extraneous pieces are gone. fsociety has collapsed, Elliot’s revolution has failed, and Evil Corp and Angela have been all but neutralised.

What we’re left with is Elliot, Darlene, Mr Robot and the revolution they tried to begin and Whiterose and the Dark Army who took it over for their own purposes. The goals, stakes, and combatants of this class struggle or whatever you want to call it have never been clearer. Now Mr Robot has the opportunity to tackle them in as clear or ambiguous a way as it wants to. Whichever route it chooses, it will likely continue to succeed.