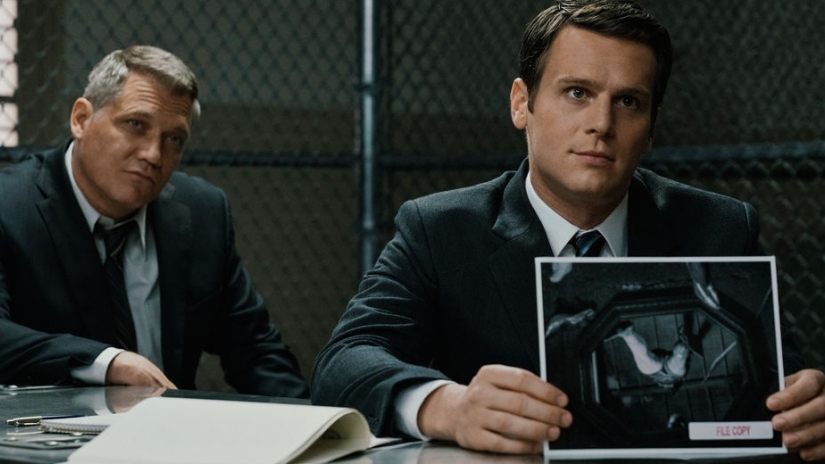 Netflix's Mindhunter is a fresh look at the dark depths of the human mind. Here's our spoiler-free season 1 review…

What you think about Mindhunter, Netflix’s new ten-episode drama series shepherded by David Fincher, likely depends on your reaction to the musical cue at the end of the series’ second episode. After spending an hour indulging the proclivities of a serial killer who defiled severed heads, the credits roll to the tune of the Talking Heads’ Psycho Killer. Either you find the on-the-nose soundtrack choice to be a darkly funny way to cut the macabre tension, or you find the whole thing to be over-the-top and a little sick.

A seventies period piece detailing the origins of criminal profiling on the homicidal and insane, Mindhunter has a lot in common with Fincher’s modern masterpiece, Zodiac, except through three episodes, I guess you could say it’s a bit quirkier? Maybe that’s the word that comes to mind since series lead Jonathan Groff, who portrays FBI Agent Holden Ford, spends his time bugging his eyes and rubbing his colleagues up the wrong way with his enthusiasm like Zooey Deschanel on New Girl. Ford is basically a giant Boy Scout teaching negotiation techniques at Quantico, desperate to find a way to better understand the disturbed minds that he encounters on the job.

Following Ford as the audience surrogate through the pilot is rough. Ford’s wide eyed, optimistic drive has little else to offer underneath and the dialogue that he’s forced to spout about his noble psychological pursuits comes across as wooden and unnatural. A scene in a bar between a young woman and Ford is so unrealistic, it’s as if the two actors were reading from scripts in their hands. If I had been assigned to watch Mindhunter’s premiere episode alone, I’m not sure I would have been inclined to continue with the series. It’s only after Ford is paired with a foil like seasoned FBI Behavioral Science Unit Agent Bill Tench (Holt McCallany) or an incarcerated killer in episode two that his character becomes more endearing. In the episodes I viewed, the standout performance comes courtesy of Cameron Britton as the massive Co-ed Killer, Ed Kemper. Physically imposing, yet polite, articulate and friendly on the surface, Kemper psychoanalyses himself to Ford like none of his shocking behaviours are difficult to understand. You can tell how much fun Britton is having revelling in the part. He’s like a spitting image of John Goodman in Barton Fink. The interview scenes, shots of people in rooms talking to each other with tape recorders, are can’t-look-away horrifying and the most energetic material of the series. These moments work much better opposed to all of the time spent showing narrow-minded folks disapprove of Ford and Tench’s methods.

Stylistically, Mindhunter has the cold, sterile look of all of Fincher’s thrillers. With his signature green-tinted frame, Fincher makes the first two episodes resemble his other Netflix project, House Of Cards. However, Fincher flexes his muscles a bit in episode two, throwing together a fantastic travelling montage and intercutting shots of a disturbing confession with a sunny California golf course. Fincher is able to create an underlying sense of dread even when the bad guys are already locked away and the meetings take place during daylight.

Interestingly, Mindhunter plays with a procedural element, which might be a first for Netflix. Ford and Tench travel teaching cops FBI techniques, and while in town, they’re usually met with details of a bizarre, ghastly unsolved crime. However, instead of hitting the pavement and embedding in the town to solve the case, they just bounce their theories amongst themselves like soundboards before moving on to the next inexplicable, violent crime. It may seem anticlimactic, but if you remember Zodiac, Fincher can do anticlimactic pretty damn well. Maybe it’s the morbid subject matter, or maybe I’m just the type of guy that smiled at the Psycho Killer drop but Mindhunter eventually sucked me in. Even though we know that criminal profiling becomes the norm, it still feels enlivening watching Ford and Tench fight for the right to ask the questions and watch in horror as they receive the answers.