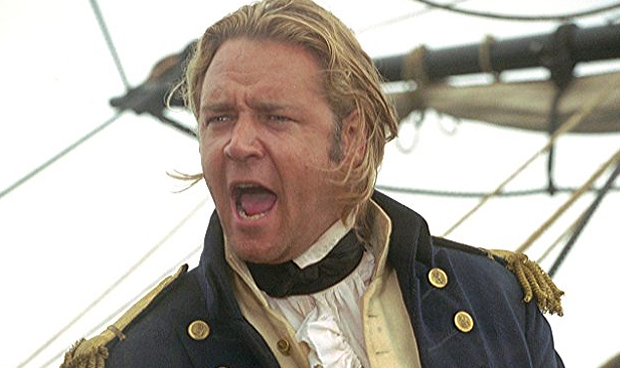 Russell Crowe gives hope to film fans who want a sequel for 2003’s Master And Commander: The Far Side Of The World.

Russell Crowe’s blockbuster resume might not always include the 2003 maritime movie, Master And Commander: The Far Side of the World. The film struggled a little at the box office, ending – it seems – plans for a series of films.

However, it’s a much loved film, and a very good one. And with one Tweet, Crowe seems to have opened the door for a sequel after all…

For the Aubrey Maturin lovers , I do hear whispers indeed that a second voyage is perhaps potentially pre-proposed a possibility . So O%u2019Brian affectionate%u2019s and aficionados , let @20thcenturyfox know of your pleasure . pic.twitter.com/HqyE8y15Uu

While Crowe’s usage of ambiguous qualifications such as “perhaps” and “potentially” in describing what is, at best, “pre-proposed a possibility” makes this a grain-of-salt kind of idea, the pure randomness of the comment, which comes from the star himself, gives it a bit more potency.

Master And Commander: The Far Side Of The World was released on November 14th 2003 in the US, arriving as Russell Crowe’s momentum-riding big-budgeted blockbuster follow-up to his Oscar-nominated performance in the Best-Picture-winning 2001 film, A Beautiful Mind.
Directed by Peter Weir (The Truman Show, Dead Poets Society), the film saw Crowe star as Captain Jack Aubrey of the HMS Surprise, joined by Paul Bettany as ship surgeon Dr. Stephen Maturin, engaging in a punishing voyage to pursue a gigantic French war vessel in South American seas during the height of the Napoleonic Wars. The film was well-received and even earned 10 Oscar nods, which yielded two wins (Best Cinematography, Best Sound Editing). However, with a bloated budget of $150 million, its $93.9 million US gross – boosted by $118 million from elsewhere – rendered it a financial disappointment by industry standards, essentially eliminating sequel prospects.

Considering those variables, the manner in which a Master And Commander sequel might get off the ground remains to be seen. Moreover, director Peter Weir, whose last film was 2010’s The Way Back, is 73 and has been out of the picture for some time. However, it’s still possible that a passion project that gets the Master And Commander band back together might be enough coax the veteran Aussie helmer back.

We can but hope…