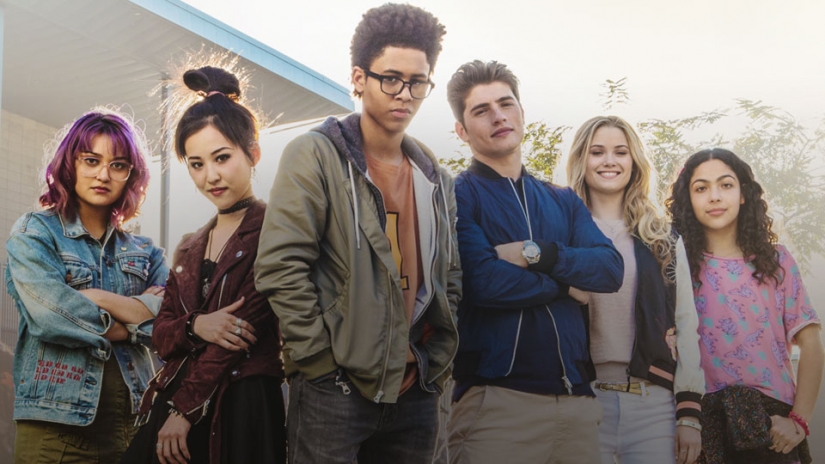 This spoiler-free Runaways review is based on the first four episodes.

Marvel hasn’t had the best year on TV. While The Defenders made a splash, Iron Fist was pretty much narratively dead on arrival. And let’s not linger too long on Marvel’s Inhumans, which limped along on ABC, despite being nearly universally panned by critics and fans alike.

In other words, Marvel TV is due for a win. Is Marvel’s Runaways, Hulu’s first foray into Marvel adaptation, it? The short answer: yes. Here’s the longer answer…

The gang used to be inseparable, but drifted apart following the death of Nico’s sister, Amy. They have all gone their separate teen archetype ways: Alex is the nerdy nice guy; Nico is the goth loner; Karolina is the beautiful girl-next-door; Chase is the lacrosse jock; Gert is the social justice warrior; and Molly is the young one.

In lesser hands, these characters might fall flat, but showrunners Josh Schwartz (The O.C., Gossip Girl) and Stephanie Savage (Gossip Girl) make sure these kids are multi-faceted and complex. From these characters’ first introductions, the show is already subverting teen drama stereotypes.

This cast of incredible young actors helps, too. This diverse group of kids has charisma to burn, and have already found a chemistry in the show’s first episodes. The series concept is built on the truth that these teens have known and loved each other (even when they hated each other) for a long time. Creating a palpable sense of history is integral to this show working, and the cast pulls it off.

The show starts on the second anniversary of Amy’s death, an event that still has an immense effect on the lives these teens are living. Alex manages to wrangle his former best friends to his house to hang out during their parents’ annual meeting of The Pride, an elite group ostensibly about supporting the community, but which actually has a much more nefarious purpose. When the kids accidentally stumble upon their parents’ human sacrifice (as you do), they are bound together yet again in a desperate quest to discover if their parents are, you know, evil.

Runaways balances the narrative between kids and parents much more equally than the comic book series it is based on. While the first episode is told from the kids’ points of view, the second episode more or less follows the same period of time, but with a focus on the parents. This choice gives more context to the parents, while avoiding the urge to make them less morally reprehensible.

Like the kids, the adult characters are incredibly well cast, with many familiar faces in the bunch. Annie Wersching (24, Vampire Diaries) plays Leslie, Karolina’s mom and the leader of a megachurch. Kip Pardue (Outcast) plays her husband Frank, a former teen actor heartthrob struggling with his current role as Leslie’s arm candy.

Chase’s parents are played by James Marsters (Buffy, Torchwood) and Ever Carradine (Major Crimes). Marsters’ is Victor Stein, a cruel tech genius. Carradine is Janet, also brilliant, but with a much more nurturing nature than her husband.

Brittany Ishibashi (Emily Owens M.D.) and James Yaegashi (Daredevil) play Nico’s parents. Ishibashi is Tina, a ruthless tech CEO who has completely closed off following the death of her daughter. Yaegashi is Robert, a man struggling to keep his grieving family together.

Ryan Sands (The Wire) and Angel Parker (The People v. O.J. Simpson) are Alex’s parents and the apparent leaders of The Pride. Geoffrey is a self-made man who grew up in the local ‘hood, while Catherine is a successful lawyer.

Finally, we have Gert and Molly’s parents, played by Kevin Weisman (Alias) and Brigid Brannagh (Army Wives). Dale and Stacey are almost painfully Bohemian. They are bioengineers whose home basement lab hides some toothy secrets, who adopted Molly following the tragic (and mysterious) death of her parents.

With any superhero comic book adaptation, tone is vital. In what is meant to be a grounded drama, how do you introduce the strange, sometimes silly elements of a comic book world without undermining the reality of a live-action TV show? Runaways does it in two major ways. First, by slow-playing the supernatural elements of this world. The first episode includes almost no references to powers of any kind.

Second, with some riveting, naturalistic teen soap drama. At its core, Runaways is about relationships — the relationships this diverse group of kids have with one another, and the relationships they have with their parents. The show’s tagline is “Every teenager thinks their parents are evil. What if they actually are?,” and Runaways has a great time delving into the period in a parent-child relationship that is most stereotypically wrought with drama and conflict, and playing that out in a much more high-stakes manner.

The pilot is the best of the first four episodes, but that says more about its quality than it does about the lack of quality in the subsequent three. This show stays good, even while falling into the familiar pacing of network TV. It does an impressive job balancing the many, many characters and making us, if not care about all of them, then stay interested in what they will do next.

Marvel’s Runaways manages to be both a supremely weird show, and an infinitely relatable one. Hulu has entered the Marvel TV game with a winner.

Marvel’s Runaways airs on Wednesdays at 9pm on Syfy here in the UK.