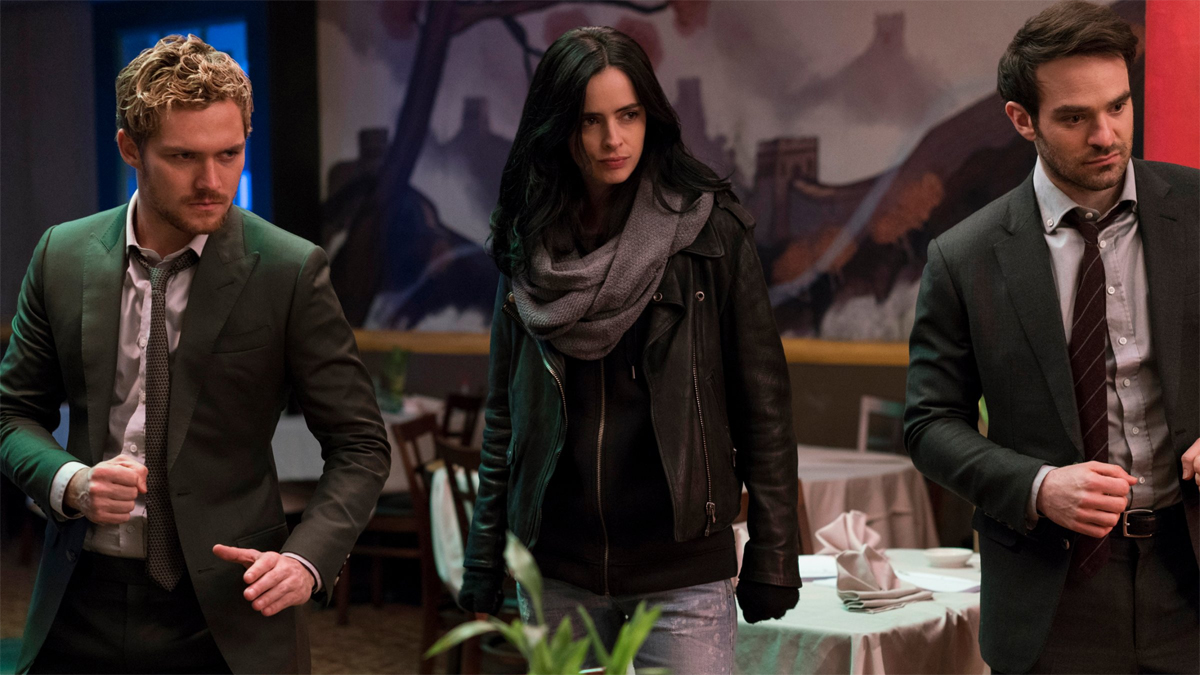 Our review notes on Marvel's Defenders reach the halfway point in episode 4. Spoilers ahead…

Watching the first three episodes of Defenders, I was reminded of Milhouse in that episode of The Simpsons where they’re watching an Itchy and Scratchy cartoon where they’re driving towards a fireworks factory, only to be interrupted by Poochie, a character no-one cares about. “When are they going to get to the fireworks factory!?” he weeps with frustration, only to be ultimately denied as Poochie’s screentime brings the narrative to an unexplained halt while he performs an upsettingly poor rap.

That was me during the last three episodes of The Defenders.

Now we’re at the fireworks factory. The Defenders have teamed up. And now they’re all talking and hanging out and I couldn’t be happier. And then Stick turns up and starts dumping exposition on them, and I was grinning from ear to ear, because THIS is the superhero team-up nonsense I tuned in for. The characters instantly find their rhythm: Jessica Jones’s sharp wit. Luke Cage’s clear-headed suspicion. Matt Murdock’s withdrawn insularity. And whatever it is Finn Jones is doing with Danny Rand. I’ll even admit, enthusiastic dork Danny Rand is actually quite fun compared to impotent anger Danny.

This episode gives Jessica Jones a lot of the spotlight, too. Not only does it touch on her relationship past with Luke, she figures out Matt is Daredevil and then is the first person to have the entirely understandable reaction of getting the hell out of a mystical war she’s ill-equipped for, even if she does eventually find herself drawn back to it in the best entrance this series has done yet.

Unfortunately, I’m starting to suspect that Sigourney Weaver doesn’t know what she’s doing here. She looks bored by what she’s doing and confused by the dialogue she has to deliver. Before this series began I was sure she’d be the Beast of the Hand – or at least its vessel on Earth – but at this point I’m wondering if she’s anyone interesting. She’s Ripley, and she’s not just phoning it in. She’s faxing it in.

At least the other Hand villains are a little better. The latest member of the council, Murakami, gets a hilariously over-the-top introduction (evil butchery!) but the guy himself seems to have an interesting angle on pointing out that Alexandra isn’t as smart as she thinks, which suggests her position in the hand isn’t considerably more senior than the others. I did enjoy Jessica tracking her name back through the records, though – that, at least, suggests a character with some intriguing backstory.

I am, however, slightly worried that now we have four members of the Hand’s army – Alexandra, Murakami, Whitehead and Gao – we’re going to see the fifth and it’s going to be Bakuto, the guy who can’t win a fight against Kun Lun’s whiniest weapon. He was, after all, running a Hand faction in Iron Fist and he’s one of the head dudes in the comics. If not him, who?

And as good as the ending of this episode was – once again, promising a fight scene that’s going to come at the start of the NEXT episode – I’m slightly concerned that at no point is anyone going to say “you know, a mystical war, immortal enemies, thousands of ninjas – should we maybe tell the Avengers?” because yeah, okay, it’s not their story – but if you’re operating in the conceit of a shared universe (and boy, has Marvel TV gone out of its way to pretend that they are) then you do have to share the load in explaining how it fits together. Or are these four people (five if you include Stick) really going to bring down an army?

Personally, I would be just as happy if this was its own universe divorced from the movies. But right now, it isn’t. Reference-wise, this episode was super-light on stuff I haven’t mentioned before, but since it was mainly about The Hand, I’d head back to Frank Miller’s Daredevil run. The Hand’s first appearance was in Daredevil #174 (1981) and let me tell you, there are a LOT of appearances subsequently.

Surprisingly, none of Alexandra’s previous aliases are references to anything that I can see. That should’ve been prime easter egg territory. But I guess maybe there’s a reveal coming that they’re keeping under wraps for now.

I am definitely ready for the next episode. This was my favourite so far!