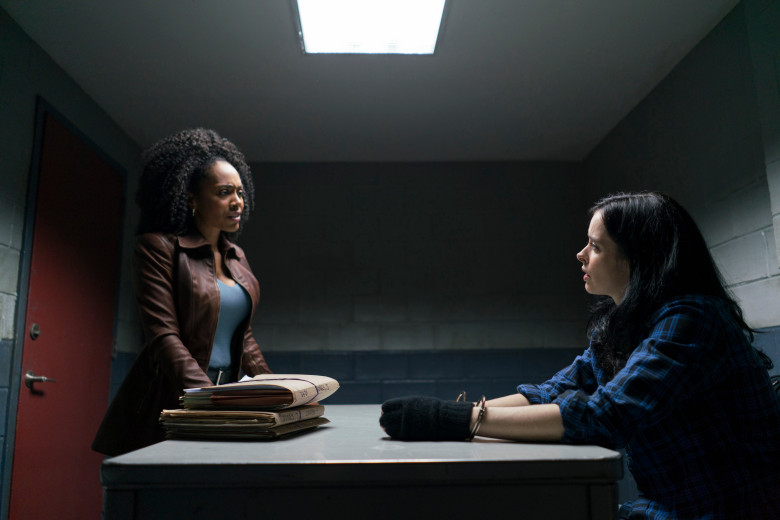 Here's our review of episode two in Marvel's Defenders miniseries. Spoilers ahead…

If episode 1 seemed low on action, episode 2 really gets straight down to it. The sequence of Matt giving into temptation and resuming his vigilante activity would’ve been a great capper to episode 1, but putting it at the start of episode 2 at least ensures there’s a good fight scene here. That said, what really thrilled me was seeing Foggy and Matt reconciling, though cautiously, in spite of his double life. It was probably my favourite thing scene in the episode, not least because it gets some properly nuanced emotion going.

That makes it all the more clear that even when he’s not the star, Daredevil is the star, because those guys (yes, Karen too) are more developed and have more riding on their relationships. And, to some extent, the reason Daredevil is the best character here is because he’s actively good at and engaged by his activities, whereas the other three are varying degrees of stupid and disengaged. Though I’ll admit, Jessica Jones is a much more consistent character under this showrunner.

Despite that, the scenes with the non-Daredevil characters still feel a lotter flatter, though the plots have interesting enough mysteries at their heart. People are in trouble, and everyone’s being kept from learning why, and even though bigger things are going on the slow unravelling of the story feels organic enough that the eventual team-up should be earned. And let’s hope so, because here we are at the end of episode 2 and we’re still waiting for all four of them to get in a room together.

Speaking of individual investigations, I sort of admire Luke’s dogged insistence on investigating Shades and Mariah, even though there’s no indication that they’re involved. It’s amusing, though perhaps not intentionally so, to have the hero certain the threat is something else entirely.

Of course, that gets really fun when it puts him into conflict with Danny “Worst Iron Fist Ever” Rand. He, for example, has forgotten about Ward, Joy and Davos and moved on with his life, devoting all of his energy to fighting ninjas. When he and Luke turn out to be tracking different sides of the same coin, we get our first proper team-up. And like all superhero team-ups, it starts with a fight that’s a misunderstanding.

I can’t be the only person who was sort of hoping that the first teaming up of these guys would be something special, and I’m sort of disappointed they didn’t go right into being super-pals. Then again, Marvel’s Television department seems almost determined to spend their time telling a perpetual origin story, so it’s no great surprise that their friendship – assuming there is one – is going to emerge slowly. Don’t get me wrong, it’s not that this is an inherently bad thing, it’s just that there are other ways to tell stories.

As a giant Daredevil nerd, I was also glad to see Stick turn up at the end of this episode, because that means we’re going to get right into the stuff everyone else hates: The ancient war between The Chaste and the Hand. That’s the most comic-booky these shows get and anyone who has followed me through five previous seasons of reviews knows I absolutely love this nonsense. Almost as much as I loved Matt turning up to represent Jessica at the end of the episode. I defy anyone to stop watching there. Comics-wise, we’re once again thin on the ground, but here are a couple of nerdy references:

The first time Luke & Danny met – I THINK – was in Power Man #48 (1977), two issues before the pair became co-headliners of the series. Naturally, there was a misunderstanding and they fought. I say misunderstanding, Luke broke into Danny’s house so it’s not exactly what you’d call a contrived misunderstanding…

Similarly, the first time Jessica & Matt met was in Alias #3, in a version of the exact scene from this episode: Jessica is being interrogated as a murder suspect and Matt interrupts it after being sent by Luke Cage.

….aaaand again, that’s about it for nerdy spots this episode.