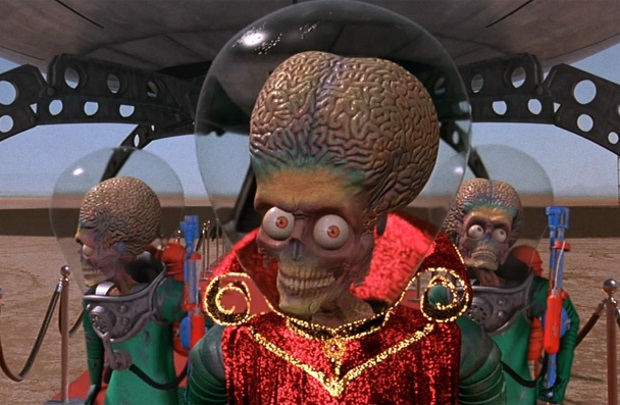 Tim Burton's 1996 alien invasion movie Mars Attacks!, and some of the nerdy stuff behind it…

Coming off the back of arguably his most acclaimed film, the Oscar-winning Ed Wood, director Tim Burton returned to blockbuster movie territory, with his anarchic 1996 take on the Topps Tradiing Card series, Mars Attacks! He pulled together a cracking ensemble cast, and proceeded to take real glee in having them dispatched by aliens with a penchant for shooting birds of peace out of the sky, and saying ‘ack!’ a lot. In fact, the  dialogue of ‘ack!’ was a placeholder in the screenplay penned by Jonathan Gems, and was never replaced. A wise move, that. Gems, goes the story, developed the screenplay for the film, and only when he was done did he realise the trading cards themselves came with their own story on the reverse side!

Get Mars Attacks! in posh new packaging here, and on digital download here. These links support the site. Thank you!

The film itself didn’t hit the expected heights at the box office (although, unusually, the original UK VHS sell-through release came in a double sized box with a free T-shirt! Hands up if you got one of those…), but it remains a whole lot of fun.

originally pitched the film himself to Warner Bros (effectively his home studio, off the back of Pee Wee, Beetlejuice and two Batmans by this time), but the earlier takes on the screenplay posited a far more violent film. There were more graphic killings, and body parts flying around, with the Martian ray guns capable of doing far more than reduce people to bones as we see in the final film. The need for a PG-13 rating in the led to those edges being cut off, with the tone shifting more comedic.

In fact, other things were cut back. The film originally had over twice as many characters, for instance, and there’s a version of the screenplay doing the rounds that goes a lot, lot, lot darker.

And for people who scroll down this far, a little extra bit.

For fans of Tim Burton, one of the many upshots of this film was that it reunited him with his long-time collabotor, Danny Elfman. For every Burton film up to and including The Nightmare Before Christmas (that Burton conceived and produced, and Henry Selick directed), Elfman provided the music, and the pair very much brought the best out of each other. However, the joy of ‘creative differences’ ensued throughout the production of Nightmare, and thus for Ed Wood, hired to provide the score.

As Elfman recalled to The Guardian, “in a quarter-century career, it’s inevitable that two people like us would have a massive implosion”, with the pressure of making Batman Returns a contributory factor to that. “I was very temperamental back then”, he admitted. “And I regretted it soon after. It was like losing a sibling”.

Mars Attacks!, thankfully, brought about a healing of the rift, and the pair have been active collaborators again since (with Sweeney Todd, ’s stage musical adaptation, an understandable exception). It turned out to be a really fun score to the film, too…