Making Canaries: bringing an alien invasion to the Welsh valleys 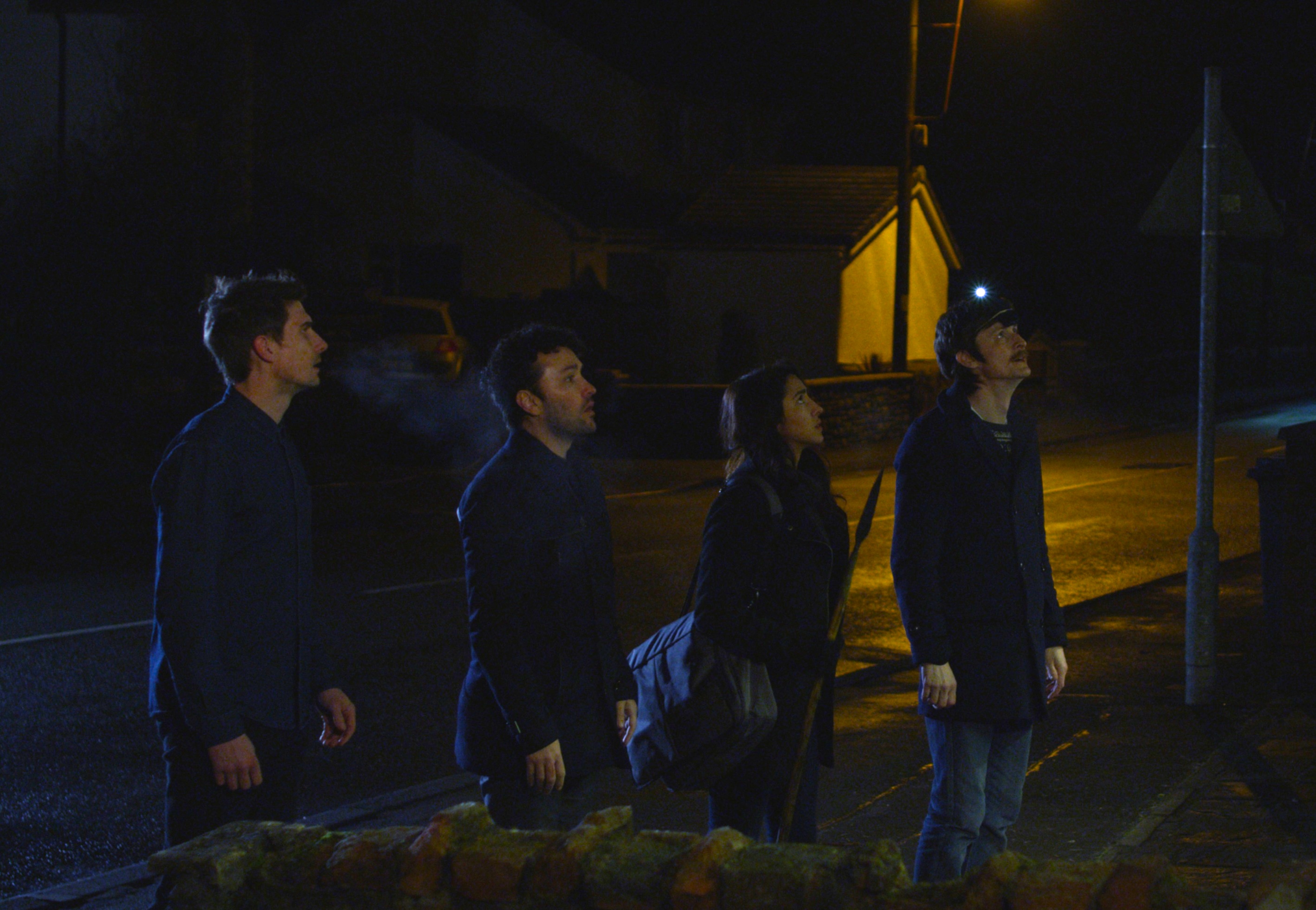 Canaries is a British feature getting a Horror Channel FrightFest screening this weekend. We've been taking a look…

Think of big screen science fiction, and it’s likely to bring to mind glossy images of alien spacecrafts obliterating the White House, monsters running amuck in New York or Tokyo, or a post-apocalyptic Los Angelean wasteland. It’s perhaps unsurprising that these are the moments which linger in our collective consciousness; on screen at least, such cataclysmic events are usually clustered around the world’s big cities, with filmmakers giving little thought to how they might play out elsewhere.

There have been exceptions of course, such as classics like Village Of The Damned (1960) and The Stepford Wives (1975) and, in more recent years, UK filmmakers have also been looking to redress the balance. Marc Price set his 2008 zombie movie Colin on a suburban British estate, for example, while Stephen Fingleton’s Survivalist (2015) effectively explores the end of the world via the experiences of one man eking out an existence in the middle of a dense forest.

Similarly, for his feature debut Canaries, writer/director Peter Stray was determined to explore how ordinary people living in a rural community would deal with a catastrophic intergalactic invasion. “The film is the answer to the question ‘What was going on in a Welsh Valley during Independence Day?’,” the filmmaker laughs. “We’ve seen how Will Smith deals with aliens, but how about a bunch of drunken Welsh people?” Those drunken Welsh people are a small group who converge on the South Wales village of Lower Cwmtwrch for a spectacularly awful New Year’s Eve party hosted by local-boy-turned-cheesy London DJ Steve Dennis (Craig Russell). The ragtag band of guests, including Steve’s most recent conquest Agnes (Hannah Daniel), gay couple Tommy (Marc Rhys) and Ryan (Aled Pugh), and London friends Nav (Richard Mylan) and Sunita (Sheena Bhattessa) — who is hiding an impressive secret of her own — soon find themselves under attack from a band of eye-catchingly attired aliens.

It soon becomes clear, through cutaways to a covert American surveillance operation run by the shadowy Miles Kendrick (Rob Karma Robinson), that this is a carefully-planned international invasion by a malevolent race who create doppelgangers of previously abducted humans; in this case, fishermen wearing bright yellow rain coats.

“I had a dream one night of many people in yellow macs against a stark valley landscape,” Stray says of the genesis of the film. “So I was working from an image, and then tailoring a story around it. I have always been fascinated by UFOs and aliens, and I also wanted to create fun and compelling characters. Let the audience get to know them, and then enjoy them either die horribly or survive!”

There are plenty of inventive deaths at the elongated claws of these deadly aliens, but there are also barrel-loads of laughs as Steve and his motley crew attempt to work out what’s going on, and survive the night.

“The film was always intended to be funny,” says Stray, “but I think if you have drunken Welsh people fighting aliens, comedic elements are going to come out regardless! Our terrific actors brought some beautiful ideas and improv to the table.”

Indeed, Canaries’ diverse cast — which also includes Robert Pugh, Robert Boulter and Steve Meo — is one of its key strengths, and it’s a particular thrill to see a female character, Sunita, play such a powerful central role. While those around her fall to pieces, Sunita maintains a calm hand on the situation while also kicking some serious extraterrestrial ass. In one memorable scene, she dispatches a couple of the deadly marauders with an expertly-wielded African sword. “I’m the son of a feminist, I married a feminist and I am a feminist,” says Stray. “So Sunita was very important. Sheena Bhattessa was a great central force in the film.”

Stray credits the film’s leading man Craig Russell, who also boarded the project as a producer, with helping to secure such an eclectic group of actors, and also ensuring the shoot ran smoothly. Russell’s local knowledge was particularly important as most of the scenes are shot in Wales, with just a handful of sequences set in American locations such as Martha’s Vineyard and Washington DC. “Craig knows everyone in Lower Cwmtwrch,” says Stray, “and was able to harness the brilliant support of the community there.”

Russell, who has also starred in the likes of Marc Price’s Magpie and Jamie Adam’s upcoming Songbird, has known Stray for years, and was thrilled to learn that the filmmaker wanted to mount a project in his home town.

“The Welsh are so supportive, and particularly the people of Lower Cwmtwrch, so shooting there was a no brainer,” says Russell. “Our support was community based; we received zero help from any funding bodies, and our miniscule budget was raised by our amazing executive producer Dominique Dauwe.” Russell did find that a great many people were willing to donate their time to the project, including Cardiff-based post production company Gorilla, who he describes as “ridiculously generous”, and Oscar-winning special effects company Milk (Ex_Machina), who came up with FX based on Stray’s original concept designs. “They watched the rough cut, loved what they saw and stepped in to help,” says Russell. “I can’t stress enough how lucky we were to get the assistance of these industry experts and, as a first time film producer, it made my life a billion times easier.

“It’s hard enough playing a leading man in a film,” Russell continues, “but when you’ve also got to be thinking about budget, feeding people, making sure actors are being delivered to set on time, that the makeup team are on schedule, that there are biscuits in the cupboard, it all gets a bit insane! As soon as Milk and Gorilla came on board, they made it all feel worth it.”

The result of this truly collaborative effort is a film which has a narrative inventiveness, dramatic scope and visual impact that belie its limited budget. “I liked the idea that the film could have been based on a graphic novel, that was always something I talked about with our cinematographer Alex Nevill,” comments Stray. “You may notice a more Tony Scott-esque look in the sequences in America, and an initial natural look in the UK that gives way to something more fantastical.”

And, in the great tradition of the genre, Canaries also has an ending which is is deliberately, deliciously ambiguous. “I knew I didn’t want to tie everything up in a bow,” says Stray, whose influences run a broad gamut from John Carpenter to Close Encounters and Buffy The Vampire Slayer. “It didn’t seem right with the story I wanted to tell. I think if you look at films like Alien, a resolution is plausible because it’s an isolated incident. For anything involving an invasion, it doesn’t seem believable to repel the enemy in a five-minute montage. I want to continue the story, and I’m happy to do that in any format.” Following a cast and crew screening hosted by BAFTA Cymru, Canaries will receive its premiere at this year’s FrightFest. For Stray, it’s a fitting venue; particularly because he’s found the horror genre, and community, to be very supportive of grassroots filmmakers. “With horror, the genre can be the star so, in many ways, it’s the biggest platform for great ideas,” he says. “People come for those ideas, the shocks, the thrill ride.”

For Russell, the experience of making Canaries could also be described as a thrill ride; one he’s looking forward to repeating. “If you want to make a film, just do it,” he says. “You don’t have to be in a city or a cultural hotspot to make movies. Surround yourself with likeminded people and everything is easier. If you don’t ask, you don’t get. Ask politely and respectfully and, nine times out of 10, people will want to help.”