Legends Of Tomorrow season 4 episode 12 review: The Eggplant, The Witch & The Wardrobe 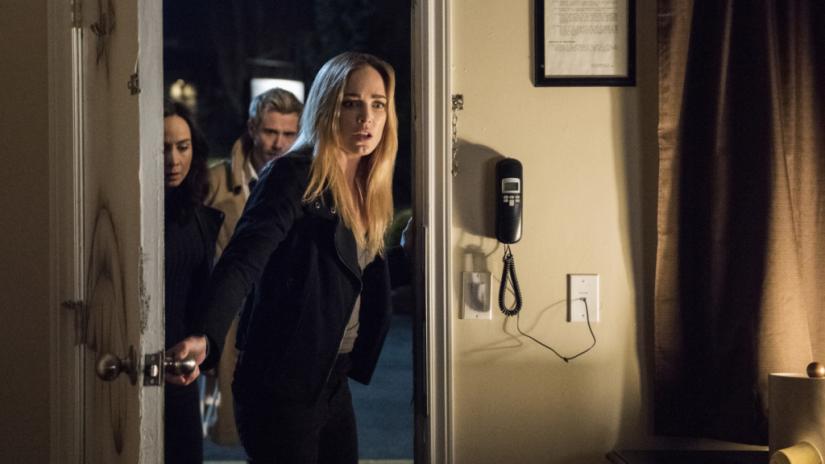 Literal relationship hell is putting together Ikea furniture with your partner on this week's Legends Of Tomorrow. Spoilers…

Sometimes it feels like Brick Tamland is writing Legends of Tomorrow. You know the “I love lamp” scene from Anchorman, right? “Brick, are you just looking at things in the office and saying that you love them?” I’m pretty sure the writers room for this season of Legends is just them sitting around looking at things in the office and turning them into episode scripts. And the crazy part about it is it’s working. The Eggplant, The Witch And The Wardrobe doesn’t hit anything near the highs that last week’s Bollywood musical did, but that’s an impossible bar to meet that leaves a lot of room for a fun character episode with a sneaky amount of plot propulsion.

The fun character stuff is based on a joke as worn as the presswood in your Jarnbjorn shelves: Ava has been kidnapped by Neron, and her soul has been evacuated to purgatory for … reasons (at first we’re told it’s so Neron can jump into a new body, but we later find out that it’s where he wants to put his mysterious girlfriend Tabitha who we still haven’t met). So in order to save Ava, Sara has Constantine send her to Ava’s personal purgatory: an Ikea knockoff. Once there, she has to find Ava, and the two of them have to work through their emotional issues, portrayed by an escalatingly ridiculous series of Ikea-related tasks, in order to return to the non-afterlife.

“Why is Ava’s personal hell working through her relationship issues with Sara?” you may ask. I asked myself the same question and immediately didn’t care what the answer was. Legends Of Tomorrow has always had its own internal logic. Ridiculous nonsense is built into the premise, and the show became the best DC CW show the moment they stopped trying to be more Arrow than Arrow and started embracing how absurd it is. Ultimately, Legends answers that question with smirking charm and relatability.

Look: the reason so much of this stuff works is because it’s real. “Ikea is the ultimate test of a couple’s fortitude” is a trope for a reason: all of these hangups that Ava and Sara go through are precisely the kind of things exposed by shopping at one of those godforsaken hellmouths (sorry “hellmüts”), from existential terror at your mattress outliving your relationship to that slow accretion of petty rage that you both feel and inevitably point towards each other when neither of you can figure out what the stupid cartoon man is holding up. I felt extremely seen when one person was shouting at the other over a pile of unsorted junk mail.

And while I’m nitpicking some plot elements, I did really enjoy some of the structural subversion that the episode pulled. The Ava/Sara story plays like it’s the main story of the episode, but more growth came out of Constantine and Nora capturing Neron and Nate and Ray working through Nate’s dad’s passing.

This is the more consequential plotline. We see at the beginning that Neron has the power to amplify any negative emotions around him – basically, wherever he goes, fights and depravity break out. So when he gets captured by the team, he pulls the same crap. Neron tries to fiddle with everyone’s minds, playing with Constantine’s regret over Des, Nora’s struggle to cope with her inner darkness, and Nate’s raw emotions about his father, and for a little while we believe that it’s working. John and Nora bicker, Nate almost blows everything by crossing the border into Neron’s cell, but then Nate pops Ray in the face and Neron’s power stops working.

That’s a really nice touch: the Ray/Nate bro pairing is one of the show’s best. The two are together for most of this episode, with Ray’s guileless sunniness working hard to help Nate cope with his father’s passing (on site at the in-construction magical creature theme park, Heyworld, of course). When Nate hits Ray, he immediately stops being angry and apologises and the two walk out of the holding cell. This isn’t particularly subtle, but neither character is and it’s really entertaining to see the show not try and milk forced conflict.

Of course, something does go wrong. Nora and Constantine have a plan to throw Neron out of Des’s body, but Ray walks in in the middle and we end up with Neron hiding in Ray’s body, Nora unconscious, and Des telling John to take a long walk off a short pier. And now we have a whole episode coming up with Ray Palmer as a secret bad guy. I can’t imagine what they’re going to do with that.

The c-plot is Zari getting peer-pressured by Charlie, Mick and Mona to escalate her relationship with Nate into something other than flirty smiles. It’s light, brief, and really funny. Dominic Purcell continues to show amazing timing; Tala Ashe is impossibly charming; Charlie’s attitude is infectious; and Ramona Wu’s over the top earnestness is growing on me.

Legends continues to be appointment television in a streaming era. Even when it’s not firing on all cylinders, it’s still a wonderfully entertaining hour of TV.