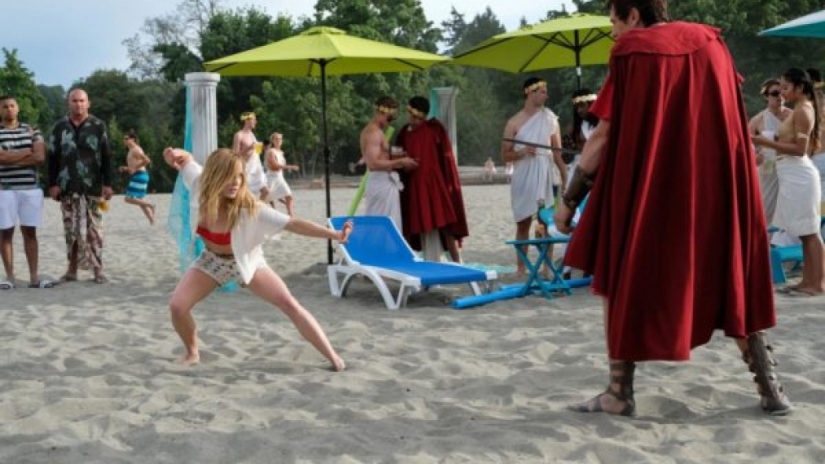 It looks like the DC TV Universe is diversifying a little with the Legends Of Tomorrow season 3 premiere!

Part of the reason why Legends Of Tomorrow was so good so quickly is because the writers and staff had a strong sense of the show’s identity almost immediately. So about a third of the way through the Legends Of Tomorrow season 3 premiere, I had a brief flash of terror when I said out loud at my TV “well it’s just a straight-up action comedy now.”

I didn’t really need to worry. The show has always leaned towards action comedy, owning its craziness and revelling in the geekier corners of the DC Universe. And this episode still had the strong core of great relationships and solid acting that they spun the jokes around. But they pushed pretty hard on the “loveable screw ups” angle, almost a little too hard, which keeps the episode from being perfect.

The episode starts where last season left off – with LA full of anachronisms and the Legends having no idea how to fix them all. Very quickly, though, time doors start opening, sending the anachronisms back where they belong. We find out that Rip has created a “Time Bureau” to monitor spacetime like the Time Masters did, but with less evil and more paperwork so not much less evil. Rip calls the Legends screw ups, says “We can handle this,” and sends everyone back on their way.

‘Back on their way’ is almost universally terrible. Sara works in a Bed, Bath & Beyond knockoff, throwing kitchen knives into cutting boards and fantasising about giving her boss a wedgie. Ray works in a pretty great silicon valley stereotype. Nate is doing his superheroing in Central City with Kid Flash, but he’s dating and it’s not Amaya, who’s gone. Jax is adrift and dropped out of grad school. Even Gideon is deactivated as the Time Bureau uses the Waverider as a stationary training simulator. The only ones who seem to be in a good spot are Professor Stein, who is hanging out at home and about to become a grandfather; and Mick, who fills his days with margaritas on a beach in Aruba, until Julius Caesar shows up and screws up his day.

That kicks off the main story: Sara, Nate, and Ray slowly re-gather the team, steal the Waverider and try and return Ceasar to his own time to prove their value to the Time Bureau. It has a momentary hiccup, but they are eventually successful and are integrated into the greater Time Bureau with some cryptic words from Rip about how they’ll probably be needed for the big bad of the season. It’s all adequate, but sprinkled with fun moments between the cast that keep the show great. Jax and Stein, and Sara and Mick both have emotional moments, and Nate and Ray spend pretty much the whole episode broing down.

Aruba-con was a good way to reset the playing field for this season. It’s not going to light the world on fire, but it was a fun, entertaining introduction to the bigger arc that succeeded at reminding the viewer why this show is so much fun.

Legends Of Tomorrow season 3 starts on Sky One here in the UK on Wednesday the 18th of October at 8pm.