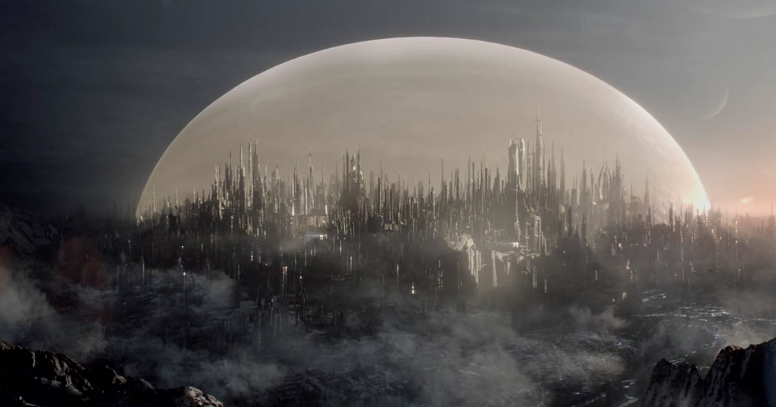 David S. Goyer chats to our US chums about his storytelling approach in Krypton, starting in the UK this Sunday on E4 at 9pm…

David Goyer is no stranger to Superman’s doomed home planet. As the writer of 2013’s Man Of Steel, he gave audiences a more detailed look at Krypton than had ever before been shown onscreen. So much effort went into designing Kryptonian culture and history for that film, Goyer wanted to explore it further. He now has the chance with Syfy’s Krypton television series, which Goyer is writing and executive producing.

Krypton centres on Superman’s grandfather, Seg-El (played by Cameron Cuffe), a minor figure in DC Comics history who coincidentally popped up in a 1999 Starman story that Goyer also co-wrote. But the character first appeared in The World Of Krypton, a 1987 mini-series by John Byrne and Mike Mignola, which serves as one of the inspirations for Syfy’s new show. If you’ve seen the trailer or images from Krypton, you may have noted some visual similarities to Man Of Steel. Goyer says that while the show “isn’t an official prequel… I don’t think there’s anything we’re doing that contradicts what was set up in Man Of Steel.” He further promises that all eras of Krypton’s pop culture history are “on the menu,” from the comics to Richard Donner’s Superman: The Movie.

Still, don’t be fooled by the fact that you know the planet’s tragic fate. Krypton takes place two hundred years before that fateful explosion, which means these are all new characters with plenty of life in them to explore. “Even in the comic books, no one has ever said what the fate of Superman’s grandfather was, nor is the fate of any of the characters that we’re introducing in the series known,” Goyer says. “I think that’s a real positive in terms of dramatic storytelling. It’s not like we know character X will grow up to be hero Y.”

While those who majored in Kryptonian Studies might recognise the names of some of the key players, Krypton should work as a science fiction show independent of its distant superhero connections. “Of course we’re making this show for fans,” Goyer says, “but we’re hoping it’s something that will appeal to people even if they’ve never seen a Superman movie or picked up a comic [or] aren’t even necessarily science fiction fans.”

Goyer compares this adaptation approach to Game Of Thrones. While George R.R. Martin’s books had a devoted group of fans who were already intimately familiar with its rich mythology, the TV show still has to stand on its own as a story. “We’re introducing quite a few characters in the first season that DC readers will know about,” Goyer says, “but the mantra with everyone involved is ‘don’t assume the wider audience will know who these characters are.’”

It even sounds like Krypton will surprise fans with its ties to the wider DC Universe. “There are a lot of other characters from the Superman canon, some of which have been linked to Krypton before, some of which haven’t, that are also included,” Goyer says. “There are also some other DC Universe characters that aren’t specifically part of the Superman canon that will play a role.” Sadly, despite my best efforts, he wouldn’t confirm if this means we’ll see Thanagarians or members of the Green Lantern Corps.

“We’re definitely doing some things that I think people won’t expect,” Goyer promises. “And we’re making some unexpected additions to this Superman world that I’m excited for audiences to see.”

Krypton starts on E4 in the UK on Sunday the 19th of August at 9pm.