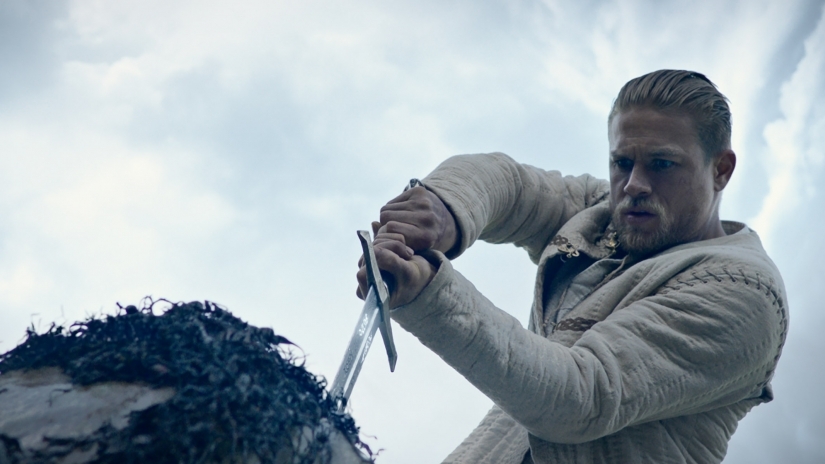 Is it worth getting excited over Excalibur's latest big screen unsheathing? Here's our review of King Arthur: Legend Of The Sword…

Londinium. Unspecified olden times year. A young orphan is found in the Thames, and taken in by the staff of a nearby brothel. It surely isn’t a spoiler to say that he grows up to be Charlie Hunnam’s Arthur, who pulls a sword from a stone that no one else can, and irks the king of England (Jude Law) in doing so.

Much has been made of that fact that Guy Ritchie has directed and co-written this fresh reboot of the King Arthur legend, with the term “Medieval wide boy” being coined to describe Hunnam’s take on the central character.

Yet those early descriptions were a tad harsh. This isn’t an Arthur that swaggers his way around Camelot, wheeler dealing like Del Boy. Rather, he’s an ordinary bloke that doesn’t particularly want the attention that removing a weapon from a rock seems to garner.

This isn’t a bad direction to take the character in, although in the case of this film, it does grow a bit tiresome when you’re a good way into the movie and Arthur still doesn’t fancy picking up the eponymous blade and charging into battle. This is very much an origin story for Arthur, which has ‘we’re hoping for a whole universe of sequels, so we won’t put too much in the first one’ written all over it.

Thankfully, you don’t have to wait for Arthur to get his act together for the action to begin. There’s a flashback battle at the start, for example, that feels a little like The Lord Of The Rings but with a lot more magic elephants. And it’s worth noting that this showdown comes closer to capturing the tangible, lived-in action of Peter Jackson’s iconic trilogy than The Hobbit: The Battle Of The Five Armies ever did.

In fact, most of the action here looks better than your generic modern CGI-stuffed blockbuster. It helps that Ritchie brings back the slow-motion fight style that he honed in the Sherlock Holmes movies, which means you can actually see what’s going on in most of the one-on-one fights.

Sadly, the script is worse than the direction, and you can really tell that a gritty Guy Ritchie story was spliced together with a more fantastical one by Joby Harold. The contrast is jarring, with the magical characters (like the intriguing Mage, played winningly by Àstrid Bergès-Frisbey) disappearing altogether for large sections of the movie.

There’s also an over reliance on cutaways and flashbacks, with a number of sequences in the middle act feeling like they could be narrated by Michael Pena’s character from Ant-Man. The result of this is a half hour where Ritchie doesn’t linger in any of the scenes, or allow the characters to breathe.

In fact, the script seems to be more interested in getting to the next bit of banter, or the next cool cameo, or the next action beat, than it is with letting the characters sit in a scene together and talk like actual people. Considering that King Arthur is renowned for having a round table’s worth of friends, this feels like a significant misstep. There’s no time for genuine chemistry to grow when you’re constantly cutting from one thing to the next.

It’s also tough for performances to really shine when the editing is this pacey. Aidan Gillen comes across as ‘that guy from Game Of Thrones, but now he’s got a bow and arrow’ while Eric Bana’s character gets a very short shrift in terms of time on screen. The aforementioned Àstrid Bergès-Frisbey has charisma in abundance, but is absent for too much of the film to make a real impact. Djimon Hounsou, similarly, feels like he could have a lot of fun in his knightly role, if he was allocated a bit more to do or say.

The only actors that fully register are Hunnam – who impresses with his charm, and action capabilities, but could’ve done with more time to loiter in the emotional scenes – and Law, who is utterly despicable as King Vortigern. If you thought Law was at his nastiest in The Young Pope, think again. He has some of the most memorable scenes here, for some not-very-nice reasons.

For every exciting moment here, there’s an infuriating one to counteract it. Hunnam and Law impress, and there are enough fun moments and strong action scenes to make a sequel sound appealing. But there’s also a disjointed script that favours banter-stuffed cutaway montages over character development and the magical elements that make this lore interesting.

If this does lead to an Arthurian movie universe, let’s hope for a better balancing act in the follow-up films, and a lot more Excalibur…

King Arthur: Legend Of The Sword reaches UK cinemas on Friday 19th May.