Jumanji: Welcome To The Jungle review 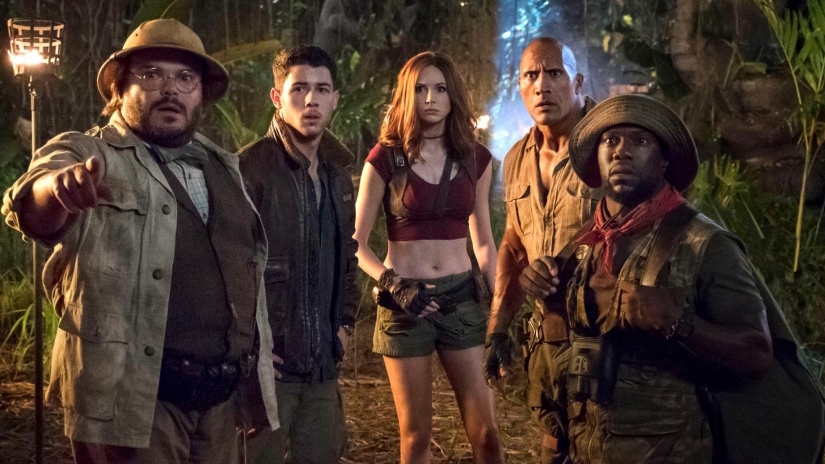 The new Jumanji film is a very pleasant surprise. Here's our review…

90s nostalgia culture is upon us and, like it or not, one of the first targets of this new era is family adventure movie Jumanji. It’s a tricky one to get right even disregarding the pressure to do right by the late Robin Williams, but Jumanji: Welcome To The Jungle manages to deliver two hours that are way more fun and inventive than they needed to be.

Choosing their characters – Dr Smolder Bravestone (Dwayne Johnson), Moose Finbar (Kevin Hart), Professor Shelly Oberon (Jack Black) and Ruby Roundhouse (Karen Gillan), respectively – they’re sucked into the game and given the task of saving the jungle from its evil overlord (Bobby Cannavale). All have their specific strengths and weaknesses, and together they must play through the levels in order to leave the game.

First and foremost, it’s a pleasure watching these actors play against type, whether it’s Johnson as the hypochondriac video game nerd or Gillan as the awkward, shy teenage girl. Jack Black is the stand-out, in a role that could have gone terribly, terribly wrong had it gone for the obvious, lowest common denominator gags over what we’re actually given.

The writing and a surprisingly well-judged performance ensure that, while it’s obviously humorous to see Black behave like a self-absorbed, social media-addicted teenage girl, that’s never the main butt of the joke. It also forces us to ask the question – does it count as passing the Bechdel Test if one of the girls is played by Jack Black? My instinct says yes, but it’s still an unexpected question for a film like Jumanji to inspire.

Similarly, the film almost manages to turn the distaste at watching Gillan parade around in a tank top and short shorts on its head (almost), referencing it head-on as well as just making sure that Ruby Roundhouse is a fantastically entertaining character. Yes, Sony is attempting to have their cake and put a half-naked model on the poster too, but it’s not as distracting as feared.

A loose-remake like Jumanji, relying on the same formula as 21 Jump Street (success) and Baywatch (failure) to entice audiences into the cinema, lives and dies on how good its jokes are. We’re not in Jump Street territory here, but the film manages to be both funny and thrilling enough to justify its existence. We may forget that the original film was genuinely frightening for a whole generation of kids and, while Welcome To The Jungle doesn’t ever really attempt to scare, there’s a great action-adventure movie here.

It’s basically what this year’s The Mummy could and should have been – a family-friendly blockbuster with slightly rough edges, relying on its charming cast and some clever twists and off-beat choices. That’s the delightfully 90s vibe talking, of course, a time when this kind of film was allowed to be a bit naff so long as the audience had a good time (the original Jumanji only has a 50 per cent score on Rotten Tomatoes).

Gamers old or invested enough to be familiar with those early point and click graphic adventure games (Monkey Island, be still my heart) will get a particular kick out of some of the details included, from the way characters die and come back in a particularly frustrating level, or the inclusion of expository cut scenes. The three lives and you’re out conceit is particularly genius, lending genuine peril to certain sequences.

There are some fun connections made to the both the original film and the legacy of Robin Williams, none of which should be spoiled before going in. Refreshingly, the presumed limitations of the film are glossed over with wit and speed, whether it’s why the original board game has suddenly become a videogame, or a great final note that apparently kills one obvious route to a follow-up.

Rarely derivative and always enjoyable, Jumanji: Welcome To The Jungle is not the uninspired imitation you may have been expecting.