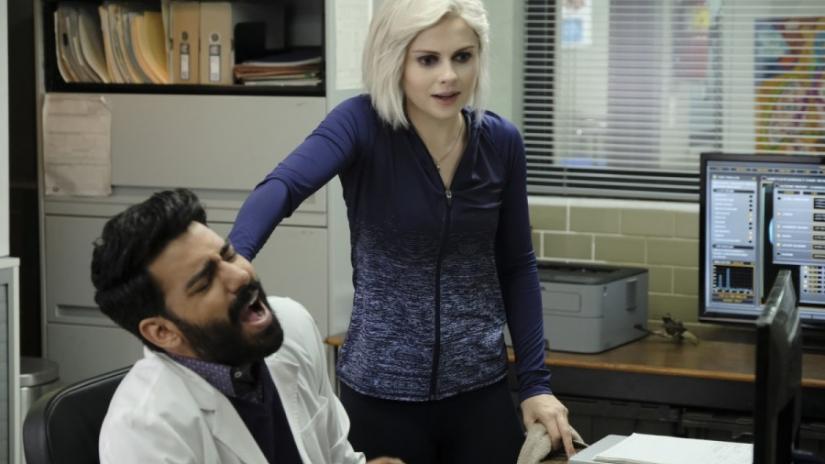 iZombie bites off more than it can chew in this ambitious, yet problematic episode about the rising tensions between New Seattle's tribes.

After a stellar start to season five, iZombie stumbles in the second instalment of its final season. As mentioned in last week’s review, this show has done an impressive and ambitious job of slowly shifting its setting from “real-world Seattle” with a few zombies here or there to a post-zombie-outbreak, walled New Seattle under martial law.

The season premiere was a masterclass in balancing the disparate tones of the show’s quirky, sometimes romantically-minded murder-of-the-week elements and its ‘we’re living under a zombie corporation’s martial law and a fringe group is slowly killing zombie soldiers’ elements. Deadlift isn’t as successful.

To be fair, Deadlift has a lot of—too much—plot to cover. Over the course of this episode, Jordan is killed by the Dead Enders, The Foster Kids make it into New Seattle with Baron killed in the process, Liv and Clive find out the convenience store murder was a hoax and cover it up, Major pretends to kill some of his mutinous employees but ices them instead, Liv and Major have a ‘romantic’ dinner, we check in with Peyton and Ravi’s sex life, Liv eats the brain of a weightlifter, Oliver becomes a zombie and then makes his pre-teen foster sisters zombies too, and (somewhat nonsensically) Peyton sells the naming rights to the Space Needle. Oh, and Kareem Abdul-Jabbar is there, too.

It’s too much for one episode, and Deadlift buckles under the weight. It doesn’t help that, in each storyline, iZombie tries to use zombie-ism as a metaphor for a different marginalised community, in the process highlighting just how problematic the show’s sociopolitical analysis can be when it gets too specific without doing the work to earn any kind of specificity.

In this episode, iZombie tries to use zombie-ism as a metaphor for a great many things—from queerness to refugees to race—and, in doing so, its political and social critiques are stretched perilously thin. One of the chief problem with equating zombie-ism with real-life marginalised communities is that, in the world of this show, the zombies we know have an incredible amount of institutional power.

Major is in charge of the corporate army that polices New Seattle. Blaine has control of the brain supply, making him both the richest and most powerful criminal in town. Liv, who is best friends with the acting mayor and good friends with Lieutenant Bozzio, has incredibly strong connections to the city government. In geneal, their social group more or less controls this city—a fact that is particularly clear in scenes like the one that takes place in the third act of the episode in which Liv’s social group basically decides to lie to the people they have, in various senses, sworn to serve.

The gang decide to cover up what really happened with the convenience store murder, finding two desperate people to take the fall in exchange for passage out of the city. (I guess the city’s justice system is just as opaque as everything else, and therefore people won’t ask any questions about why the two people arrested for this crime have not appeared in court? This also implies there is no free and/or independent press in this city, which, frankly, doesn’t surprise me.)

iZombie‘s attempt to equate zombie-ism with real-world marginalised communities is further problematically complicated by the show also trying to explore the identity of zombie members of Fillmore Graves’ private army as police-like entities. There are enough shows on TV that glorify the work of police officers; we don’t need iZombie to half-heartedly do it, too, especially while it is simultaneously trying to use zombie-ism as a metaphor for blackness. It’s really not a good look.

Liv’s friend group represents a straight-up oligarchy and, while that could be a fascinating story to explore (especially in relation to our country’s own oligarchical tendencies), the show seems to have very little self-awareness of how terrifying it is that this one social group—one that has not been elected (not even Peyton)—has so much power and operates with very little transparency or accountability.

Showing that Major grapples with the frightening amount of power he has is not enough to discount the fact that he is one dude who is in charge of the private miltary force occupying the city. Frankly, I don’t really care if he is trying or feels bad about it. If the show wants us to see him as some kind of hero figure, then he needs to do more—like find ways to dismantle Fillmore Graves as an organisation without destablising the city anymore than it already has been.

In many (albeit different) ways, Fillmore Graves is just as scary as the Dead Enders terrorist organization, but, unlike the Dead Enders and their white nationalist tactics, iZombie doesn’t seem to be aware of it. They know that rogue Fillmore Graves employees can be very dangerous, but they don’t seem to have a problem with the institution as a whole—at least not yet. This isn’t surprisingly given that, as a culture, we are not very good at critiquing the U.S. military or the police. Instead, shutting down the conversation before it ever begins, and calling any challenge of either institution’s tactics or degree of power and access to resources as anti-American.

I didn’t expect iZombie to give us any kind of nuanced take on that deep-seated cultural norm, but I also won’t let them play Major off as a sympathetic character just because he isn’t as bad as his employees who spend their off-duty time murdering people. I continue to praise iZombie‘s ambitions. I just hope that, as this final season progresses, they understand where their storytelling lane is and stay in it.