I’ve got questions about the Rainbow Cinematic Universe 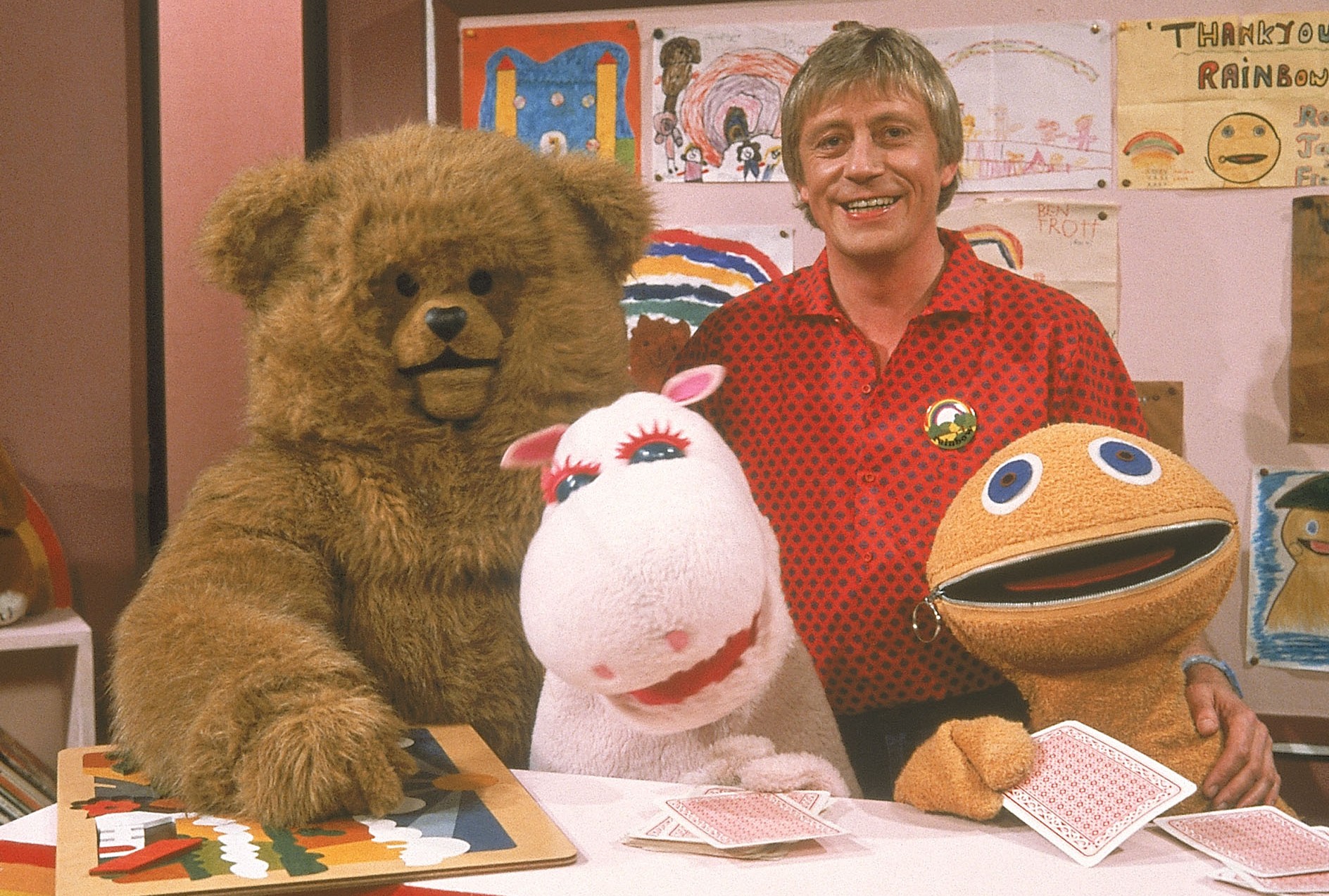 How does Geoffrey make a living? What's the deal with Rod, Jane and Freddy? Jenny dives deep into the mysteries of Rainbow…

You think Pixar films leave you with questions? Try being a fan of Rainbow. Over the years, my binge watching of the show has left me scratching my head on numerous occasions, and not just when I was 6 and had nits.

In this article I will attempt to ignore the fact that I’m in my 30s and writing articles about Rainbow. I’ll also have a crack at unravelling some of Rainbow‘s more intriguing mysteries.

Be sure to leave a comment asking “Why is this on Den of Geek?”, as this is a surefire way to get a girlfriend.

What is Geoffrey’s job? Occasionally, when the plot requires that Geoffrey refuses to play Snap or Hide n Seek, he claims he’s trying to get on with his work, or that he has “a lot of work to do today”.

Also, let’s ignore ‘How did Zippy get in that box?’, I can only cope with so much.

I can’t figure out what Geoffrey’s job is supposed to be. You would just assume he was a foster parent, and that’s how he gets money to buy food and clothes for the others (maybe not clothes). But from what I can gather, Geoffrey’s job actually involves looking at some papers that are stapled together, and then being in a bad mood.

Mostly, Geoffrey works from home. However, in this episode he clearly states that he has to go to work. Bungle asks “Can we come to work with you?”, to which Geoffrey replies “No sorry, I have to go to work by myself.”

Theory: Geoffrey isn’t going to work at all – he’s one of those men who pretends to have a job, but really goes and sits in the library all day so their wives won’t find out they don’t have a job. Bungle’s probably the wife.

Whatever Geoffrey’s employment situation, I think it’s fair to say that his fortunes go up and down. In some episodes he has a car, only to find the next week that he’s pawned it and is back to getting the bus. One possibility is that Geoffrey uses his various cars for insurance scams, deliberately getting rear-ended at roundabouts, question mark profit.

Also: in the above clip, Geoffrey plans to leave the others with a childminder while he goes to work. This has extensive ramifications for Question 2…

How old are Bungle, George and Zippy? This seems to vary. Bungle once got a birthday cake with eight candles on it, suggesting he’s around that age. However, he also goes to playgroup with Zippy and George (who uses a potty), and he has to get Geoffrey to write Christmas cards for him because “I’m not very good at writing yet”.

However, this doesn’t stop Geoffrey swanning off and leaving them home alone. Once, Geoffrey went on an entire narrowboat holiday without them. He usually leaves Bungle in charge, which he wouldn’t do if Bungle wasn’t some sort of teenager. I suspect he’s not though, because when left in charge he does things like dressing up as Superman and forgetting to make any dinner.

Personally, I think this willingness to leave them alone depends less on Bungle’s age that day, and more on Geoffrey’s desperation to get away from Bungle’s stupid face for a bit.

Why does Zippy never just unzip himself?

He can clearly reach. All I can think is that there must be a worse punishment for doing so. I have a theory that the first time he unzipped himself, they took his legs away.

Where do Rod, Jane and Freddy live?

Rod, Jane and Freddy seem to live everywhere and nowhere all at once, a bit like God or The Littlest Hobo. In some episodes, they live in Geoffrey’s kitchen, out of which they just appear when it’s time to sing a song. In others, they have their own bedroom: The location of this bedroom is not clear; it could be in the Rainbow house, it could be at Trowell Services for all we know.

Occasionally, Rod, Jane and Freddy will come for a ‘visit’, suggesting they live more than three feet away. Also of note is the episode where Jane carries a tray of drinks over from their house, suggesting that their house isn’t in another county or anything.

How many rooms are in the Rainbow house? In the episode Bungle’s High And Mighty Day, the gang have a discussion about giving Bungle a room of his own. This is because he’s tired of sleeping in Zippy and George’s piss and shit. The gang concludes that Bungle can’t have his own room, because there isn’t another room.

There’s also an episode where ‘Auntie’ stays over, and she has to have Geoffrey’s room while Geoffrey sleeps downstairs. This further proves that they don’t have any spare rooms.

However, other episodes cast doubt on this assertion by revealing the existence of at least ten other rooms, which seem to pop in and out of existence. Admittedly, some of these rooms are called ‘the tent in the garden’ and ‘the spaceship they somehow own in one episode’, but they’re still adequate for Bungle’s needs. Apart from the kitchen, because apparently Rod, Jane and Freddy already live there.

A while ago, I tried to compile a definitive list of all the rooms in the Rainbow house. As you can see, I even drew a floor plan.

Why do Zippy and George stand next door when they go in the garden? In before “It’s because they’re puppets durrrr”. Yeah I know that, but that doesn’t stop them having something else to stand behind, which is on their legal property. Unless they own next door as well.

To my knowledge, they’ve had four different neighbours over the years: Dawn and her Casio keyboard, Mrs Henderson (who you never see but who sometimes gives them eggs), an Indian couple who once came round to read a story and were never mentioned again, and a man who once threw a boot at Zippy’s head to shut him up. Given that most of their neighbours aren’t out to injure them, it might make sense for them to have some kind of weird garden rental arrangement going on.

Do they know they’re on TV?

In some episodes, the chance to be on TV arises, and the gang shit themselves with excitement, or they’ll talk about what it would be like to be famous. In other episodes, they’ll happily have a meta-discussion about being on Rainbow. I’m not sure what’s canon here (there’s now such a thing as ‘Rainbow canon’).

Also, in the episode Smile Please, Geoffrey shows the others how a video camera works, despite the fact that they must have had video cameras in their living room for the last 20 years.

Actually, they must know they’re on TV, because what else would they think Geoffrey was doing every time he addresses the viewers? What, do they think he’s just telling the wall it’s time to go?

How bad an insult is ‘silly’?

Because I get the impression that, in the Rainbow universe, this is the equivalent of calling someone a c***. Zippy definitely does. There’s a whole episode dedicated to his infatuation with Debbie, the Children’s ITV presenter. And let’s not forget Bungle’s obsession with Jane (sitting next to/dressing up as).

How would this work in real life? Has anybody stopped to consider the ethical ramifications of a human/puppet romance? Would Zippy and Debbie be allowed to get married (assuming Zippy is an adult, and not 3 years old)? Would the guy who operates Zippy have to go along on their dates?

Perhaps a more interesting question is this: Does Bungle spend the entire show getting friendzoned by Jane?

What were they smoking when they decided to make that reboot?

The Rainbow Cinematic Universe has been rebooted twice, once by Tetra Films, and once by Christopher Nolan. As seems to be the case with these things, both reboots were dumbed down for the younger market.

The first reboot was harmless enough – you can sit through an episode without screaming. The gang all work in a toy shop. Bungle wears a bow tie, and has no eyes. Fine. The second reboot was more worrying. Presented by Dale Superman, Rainbow Days adopted a sketch/nightmare format, and began its run with the unfair disadvantage of being shit.