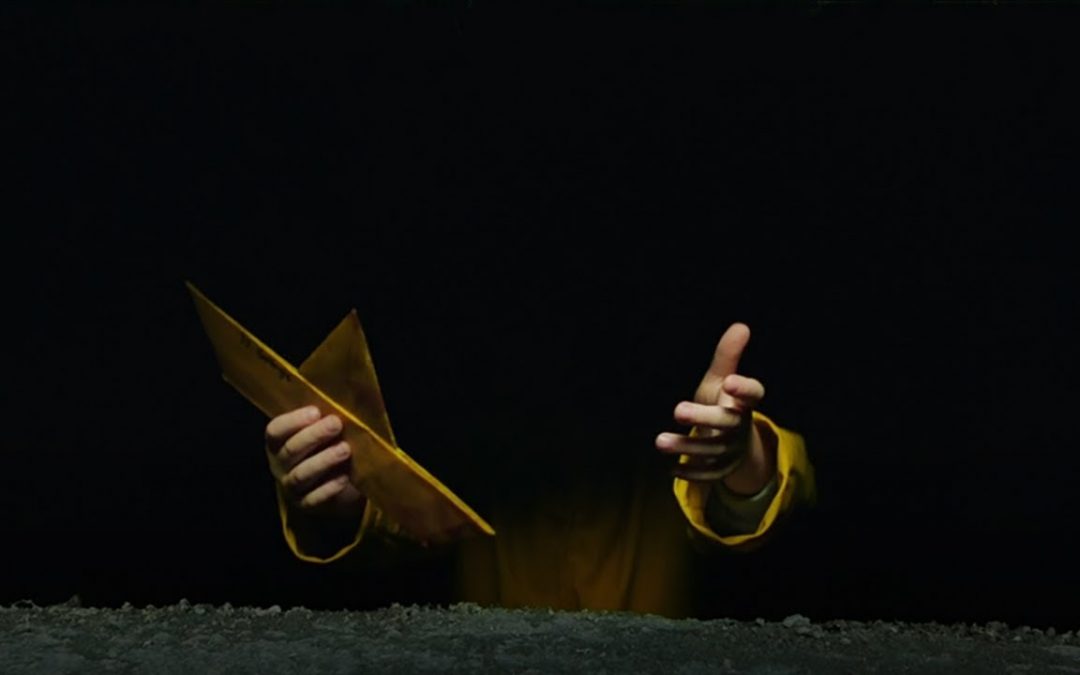 We've dissected the It Chapter Two trailer for all of its secrets. Here's what we found…

The It Chapter Two trailer is finally here to haunt us all the way to September. The second part of this Stephen King movie adaptation sees Pennywise the Clown in fine form, back from the dead and absolutely loving it. The Losers’ Club isn’t so happy about it though, as our heroes are all grown-up and forced to return to Maine to face the terror waiting in the sewers of Derry.

While the movie is still a few months away, this first trailer comes with many secrets and story hints that tease how things will play out for the characters and King’s greatest monster. We’ve gone through the trailer again and found a handful of things that will jump right out at you if you’re a Constant Reader as well as a few things you might’ve missed… be warned there may be some mild spoilers of the It novel in the analysis below.

Before we get started, here’s the trailer again:

Now, get ready to float…

The trailer opens with adult Beverly Marsh (Jessica Chastain) visiting her old home in Derry, Maine, one of the worst places to live in the state. She is greeted by the friendly, elderly Mrs. Kersh, who has spruced up the place a bit, transforming what was once the source of Bev’s nightmares, the apartment she shared with her father, into a warm home. You can probably see where this is going.

This scene is actually ripped straight out of the novel and was also used to similar effect in the ’90s miniseries where It takes the form of Lorraine Kersh to scare Bev into leaving town. At one point in the miniseries scene, Mrs. Kersh begins to talk in the voice of Bev’s abusive father. It’s likely the movie version will be even more hardcore than that…

We see Bev searching for something inside a secret nook in her old room. It’s the postcard with the poem Ben Hanscom (played this time by Jay Ryan) wrote for her when they were kids. In the book, Bev had forgotten “January embers” and cannot remember who wrote it (she winds up thinking it was Bill, alas). Adult Bev seems to also be remembering something long forgotten. Will she recall who penned the magnum opus?

We’d also like to note it’s a very nice touch that Bev maintains her short hair affectation from the first movie. It was a flourish of the 2017 movie that Bev’s father liked her long hair (hence why she cut it), so it’s affirming of her continued strength that she never grew it out.

The flies tend to hint at how much grosser this sequence is in the book. While we don’t necessarily recall flies being involved, the “clean” home Mrs. Kersh keeps disintegrates into what is essentially a fairy tale nightmare, complete with Mrs. Kersh turning into a witch. (Also keep an eye out for what’s in Bev’s drink…). Flies hint at a similar gross interior that will soon be revealed, and might likewise be an homage to the original Amityville Horror movie.

By now, the audience already knows something is up with Mrs. Kersh, but it’s this creepy moment that begins to trigger Bev’s fears. “No one who dies here ever really dies,” says the woman holding a sinister smile for what seems like an eternity. Bev seems entranced by it. It’s time to RUN, Beverly!

Further proof things aren’t right with Mrs. Kersh. Her skin is rotting, not unlike Mrs. Massey in The Shining, who haunts Jack and Danny Torrance in Room 217 (in the novel) or 237 (in the movie). This seems to be a nod to that monster.

Pennywise haunts Derry every 27 years, wreaking havoc around the town and killing lots of people before heading back into a deep slumber. We know this supernatural entity has been hanging around Derry since at least the 1700s and the picture above seems to be a reference to just how long Pennywise’s reign of terror has lasted. He stands sinisterly next to a frowning little girl. Mrs. Kersh tells Bev that her father joined the circus when she was a girl, suggesting she is actually the girl in the picture and that’s she’s known Pennywise the Dancing Clown for a very long time.

What’s a Stephen King story without a monster prancing around in the nude behind the main character? As she’s doing her naked thing, Mrs. Kersh asks Beverly if “she’s still daddy’s little girl?” which is a reference to the torment young Bev faced while she lived with her sick, abusive father. By this point, Bev knows that something is terribly wrong with Mrs. Kersh and this house! (Also while Kersh turns into a witch in the book, this is further proof that this version of the scene is in homage to The Shining.)

Here’s your starting lineup for the new Losers’ Club: James McAvoy as Bill Denbrough, Jessica Chastain as Beverly Marsh, Bill Hader as Richie Tozier, Jay Ryan as Ben Hanscom, Isaiah Mustafa as Mike Hanlon, and James Ransone as Eddie Kaspbrak (not pictured but he’s coming). Mike is the Loser responsible for bringing the rest of the group back together.

You’re probably wondering where Stan Uris in this picture? Well, things don’t turn out well for Stan in this movie… Adult Stan is played by Andy Bean.

This reflection is a nice little nod to the incredibly talented actors who portrayed the young Losers’ Club in the first movie. We’re sure a lot has changed for all of these characters in the 27 years since the terrifying summer of 1989. This also confirms that they shot new scenes with the original kids from the 2017 film.

The Losers’ Club reunion takes place at a Derry Chinese restaurant called the Jade of the Orient. In real life, the restaurant is called Oriental Jade and it’s located in Bangor, King’s hometown.

It’s worth noting this is the first scene where all of the characters are together as adults.

Here’s poor little Georgie, cursed to serve as one of Pennywise’s minions for all eternity. At least he finally got his paper boat back. This also looks like the same gutter from the first movie where Georgie met his doom. Some things never change.

Not much to say about this shot. It’s cut straight out of the first movie and reminds us of happier times. We doubt the adults will get anywhere close to this carefree glee in the second film.

The shot of balloons underneath a Derry Bridge will likely be the first scene of the movie. It is the second chapter of the book and is Pennywise’s return in the present (mirroring the first chapter where he takes Georgie in the past) in which a hate crime against an out and proud 20-something gay man, Adrian Mellon (Xavier Dolan), has him thrown over the bridge on the last night of a summer carnival. Pennywise then comes for him in the water with all the balloons that the attackers see. Everyone else thinks their victim drowned and was bitten or worse by his assailants (though, like Georgie in the first movie, they may change it to where Pennywise takes the body). This scene is not in the miniseries.

The aforementioned carnival that sets Pennywise’s return in motion. If you ask us, we bet that creepy funhouse that towers over the rest of the carnival will be the setting of a scare or two in the opening moments of the movie.

Here we have Richie spotting Pennywise for the first time as an adult while he rides balloons like a Mary Poppins character above the Paul Bunyan statue in the centre park of Derry. This statue played a much bigger role in the book, including when it comes alive before a shocked adult Richie and takes a swipe at him with the axe.

We are not sure if it is going to do the same here or if this is just a subtler homage, considering that some of King’s campier monsters got the axe in the 2017 movie.

Remember what we said about Ben finally getting credit for writing that poem to Bev? LOL, nope. Bill and Bev are back at it again, it seems, picking up where they left off right before Bev went to live with her aunt in Portland at the end of the first movie.

That said, if the movie ends anything like the book, Ben still has a shot even if (a married) Bill and Bev are this close to rekindling unfinished business.

This shot might be connected to the first scene with Mrs. Kersh. Bev probably runs into the bathroom to escape the monster, only to find herself suddenly drowning in gallons of thick, dark blood. You can’t blame Pennywise for sticking with the classics… Then again we are not sure if that is Bev or one of his younger victims.

This looks like the same evil house/tree/hellhole that the Losers Club confronted Pennywise at in the first movie. Their return to its front door suggests they are returning to the centre of the spider’s web… so to speak.

The adult Losers are back in the sewers, performing a ritual that will hopefully banish Pennywise from Derry and existence once and for all. This is the Ritual of Chud from the book, which allows Bill and the other Losers to enter the Macroverse, the dark void in the universe where It was born. Only there can the heroes defeat this beast.

Here’s the only clear shot we get of Pennywise in the entire trailer and it’s spectacular. Bill Skarsgard looks in fine form in his second turn as this cosmic beast who knows no fill.

Did we miss anything? Let us know in the comments!

It Chapter Two is out on 6th September.