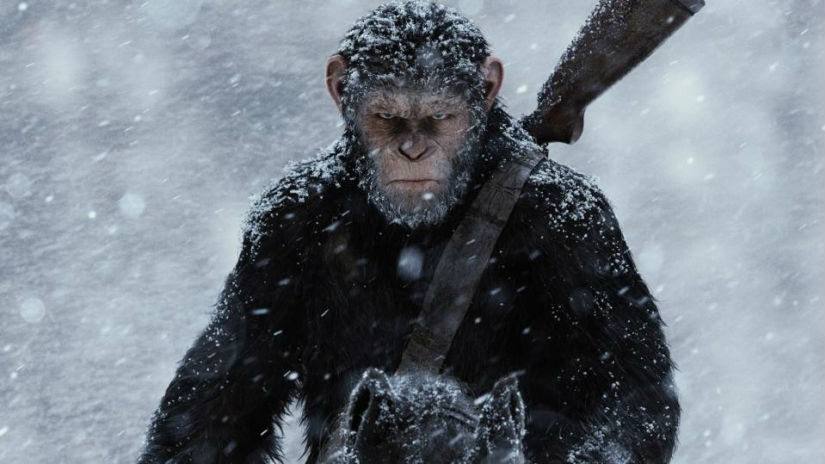 As War For The Planet Of The Apes heads to disc, we examine the novelisation, which has some notable differences to the story…

Spoilers for War For The Planet Of The Apes lie ahead

Long before the arrival of VHS and DVD, it was tough for fans to relive their favourite movies once they left cinemas. Occasional television airings and novelizations were typically the only options, and for a time movie novelisations were a big thing. Of course, with the advent of home media, their popularity began to wane as watching a movie was always going to be preferable to reading it.

Novelisations tend to be mocked in fan circles too because many of them they were churned out to make a quick buck. There are plenty of examples of badly written paperbacks that just parrot the script, with little invention on the author’s part. That said, there are some gems to be found in this sub-genre. Some writers get creative with them, taking the script and using it to flesh out characters, storylines and themes, and even add some original material. Alan Dean Foster’s Alien novelisations are a good example, offering additional insight into the characters and the universe of the movies, whilst incorporating notable deleted or unfilmed sequences such as the airlock attack from Alien.

Sometimes they can be based on an early draft too, offering an alternate glimpse of the story, such as Foster’s The Thing or Michael Jahn’s The Frighteners. Today it’s only blockbusters that tend to receive novelisations, such as Suicide Squad or Kong: Skull Island, and even with all the viewing methods available, they still have a loyal fanbase. War For The Planet Of The Apes received a couple of tie-in books: a prequel dubbed Revelations and a novelisation by author Greg Cox. Revelations is a worth a peep for fans and takes place shortly after the end of Dawn Of The Planet Of The Apes, depicting the first clash between Caesar and his new enemy The Colonel. It’s a fun read in its own right, filling in some of the blanks between movies, and giving supporting characters like Blue Eyes and Cornelia major storylines of their own.

It makes a nice companion to the War novelisation, and while the book stays relatively close to the movie, there are some interesting deviations and twists along the way. The first difference comes shortly after The Colonel’s raid on Caesar’s camp. The next morning the ape leader goes to the armoury to pick out a weapon, with his sage orangutan friend Maurice comes to talk him out of his revenge mission. The meat of this exchange was rolled into the scene where Caesar leaves his people in the film, so it doesn’t add much to the story.

The next addition is when Caesar discovers Winter – the albino ape who betrayed the camp – has become a slave ‘donkey’ for the soldiers. The book fleshes Winter out some more, with the ape being racked by guilt because of his actions, and considering fleeing the camp because he’s afraid of the soldiers. There’s almost a confrontation when he accidentally spills food over a soldier, who points his gun at Winter in disgust. That’s when Preacher – the crossbow-wielding soldier spared by Caesar – intervenes, but he’s mocked by the others for loving apes after they set him free. Winter leaves to fetch more food, leading to his fateful encounter with Caesar in the tent. This extra moment has some nice character building for the supporting players, and it sets up Preacher with an intriguing subplot not featured in the movie. The next difference is an alternative to the scene where Caesar and his people find the wounded soldier who survived execution. This is the moment Caesar realises something wrong’s with some of the men, some of whom are struck with an affliction that robs them of intelligence and speech. In the movie, Caesar mercy-kills the dying man, but in the book, the soldier is able to move and runs away out of fear instead. There’s also a tiny addition to the scene where soldiers try to ambush Caesar; in the book when the first soldier pops up suddenly he has the drop on the ape, but his rifle malfunctions, leading to the fight seen in the movie.

Caesar’s imprisonment is where the Preacher subplot comes to the fore. The soldier is shown to be compassionate to the ape, acknowledging Caesar spared him and he gives the ape fair warning not to upset The Colonel before their meeting. Caesar thinks the soldier is a good man, but when he tries to advise Preacher abandon his squad because his leader has gone mad, the soldier violently rejects the notion. He believes wholeheartedly in The Colonel’s leadership, and if that includes wiping out the apes, so be it. From that point on, he becomes cold and distant like the rest of the Alpha-Omega squad. When he later hears of the plan to execute the apes he appears regretful to Caesar, but decides it comes down to “You or us.” Sadly absent from the movie is a big speech The Colonel gives to his men, and easy to see Woody Harrelson making a meal of this scene. He tells his men it’s basically down to them, and they have to abandon mercy and humanity for the sake of their species. “If we lose, in a matter of months, the human race will gasp its last words and go silent. Just another dumb animal, left to roam a godforsaken world.” This scene also underlines how he’s become more of a messiah figure to his men than a leader, and why they’re willing to follow his every command.

The most significant addition takes place close to the prison break, where The Colonel suddenly comes to visit Caesar. This naturally sets the apes on edge, but it’s clear from his shaky movements and slurred speech he’s either drunk, or showing first signs of the plague taking his intelligence. He tells Caesar of a man who came to visit him at the start of the conflict, urging him to meet Caesar and seek peace. Caesar realises this man was Malcolm – Jason Clarke’s kindly human from Dawn – and asks what happened. The Colonel bluntly reveals he shot him, feeling talk of peace was dangerous. Director Matt Reeves revealed in interviews he considered adding this reveal to the movie, but felt it was a little too much. While it serves to renew Caesar’s feelings of vengeance, Reeves probably made the right choice to snip it and leave Malcolm’s fate ambiguous. It’s worth noting Revelations strongly hinted at this bleak outcome for the character. The last addition is a brief but significant nod to the original series. When Caesar leads his people across the desert following their escape, they find an area that seems completely devoid of life. They see the ruins of an old nuclear power plant on their trek, and a border around this dead area has a sign reading in block letters, “FORBIDDEN ZONE”.

While the book’s additions to War For The Planet Of The Apes are ultimately minor, they do flesh out some areas the movie didn’t have time to explore. If you’re a fan of the series, both War and Revelations make for an entertaining two-part story.