Has technology done fatal damage to the techno thriller? 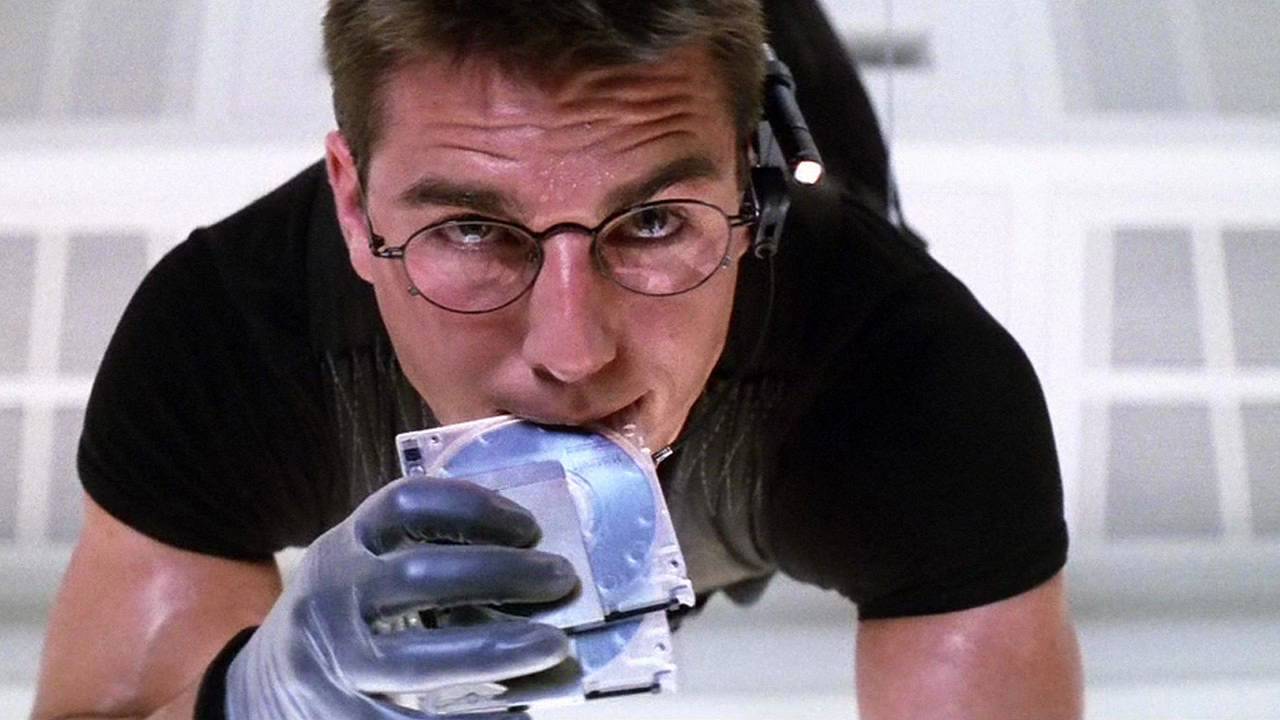 In the era of fast computers and fast internet, how can the techno thriller cope?

This article contains a spoiler for Mission: Impossible.

There’s a moment in the midst of Brian De Palma’s terrific Mission: Impossible film – the best one of the series still for me – where Tom Cruise’s Ethan Hunt has fished a floppy disk out of a bin. It’s been dumped there by Jean Reno’s duplicitous character, believed it not to contain the missing half of the NOC list. The NOC list that’s the MacGuffin for the movie, that Hunt and his IMF team are trying to stop falling into the wrong hands.

As it happens, it’s an old-fashioned switcheroo that’s been done, and the disk in the bin does contain the NOC list information. And whilst I didn’t appreciate it at the time, I do wonder if Mission: Impossible sat, back in 1996, at the point where the technology-thrilled was about to be undermined by technology itself.

At another point in the film, after all, we see the prime threat, one that was set to give screenwriters fresh puzzles to solve. For Hunt digs out a copy of Netscape Navigator, and with a few taps of the keyboard, gets in touch with the mysterious Max via internet message boards. The speed of internet research has been useful in jollying along a story, as is the case here, but also, it does solve umpteen problems easily that screenwriters previously enjoyed wrestling with.

Conversely, last month, the terrific The Day Of The Jackal landed on Netflix. Ignore the tepid remake, and go straight for this one. For this is a thriller where people have to make phone calls on telephones with cords attached to them, and where key information needs to be dug out of buff-coloured folders naturally. It makes for a slower, more gripping tension than watching someone tit around with a computer keyboard for a bit. But the consequence is that it’s more able to turn the screw. It does so expertly. Technology, in the 80s and 90s, was really, really useful for thrillers, not least because they played on the fact that it was either really slow, or didn’t work at all. Clear And Present Danger – a film I looked at in detail here – is a great example of this. Back in 1994, getting a printout, rather than sending stuff to a phone or USB stick, was the way you got your paws on incriminating evidence. As such, when Harrison Ford’s Jack Ryan uncovers details on ‘Reciprocity’, he hits the print button. But what’s this? The printer is out of paper! He promptly puts in a call to stall the slimey Robert Ritter whilst he faffs around for a ream of A4 in the midst of a Hollywood thriller. It’s relatable, though, and it works. It wrings more tension than taking a picture of the offending data and Snapchatting it, certainly.

Even then, in the case of Clear And Present Danger, we get the sequence where data is deleted from his screen bit by bit, and in a suitably dramatic way. Technologically, it was a film committed to manipulating technology for its own ends, and I applaud it for doing so.

I want to cite another movie in the midst of all of this, too. No Way Out is a technology-reliant thriller that landed in the late 1980s. Infamous for its nookie scene in the back of a limo – one that was gloriously spoofed in Hot Shots! Part Deux – one major ticking clock at the heart of No Way Out (its High Noon moment, if you will), is a computer gradually deblurring a picture. It’s techno-bollocks of course, but it’s explained with enough conviction to make it worth going along with. Still, Kevin Costner’s Lieutenant Commander Tom Farrell is left trying to get to the bottom of a murder mystery, and uncover the truth about a possible infiltrator, knowing that if he doesn’t do so, the picture in question is going to incriminate him instead.

Director Roger Donaldson harnesses the slow speed of the reveal to optimum effect. Gradually, the picture is deblurred, and every now and then, characters walk past the screen so we can keep up to date with its work. It’s the ticking bomb in the middle of the movie, and a stark reminder that Costner here is working to a very tight deadline. The internet and faster computers, though, has changed the rules. No Way Out, for a start, would be over in about 40 minutes. Notwithstanding the fact that thrillers such as Panic Room from the early 2000s were acknowledging they had to find environments where you couldn’t get a mobile signal, the problem is that information can be relayed pretty much instantly in digital form. Sure, we get the slow moving download bar across the screen, but so overused is that as a motif that it’s as tense as opening a Pot Noodle when you already know there’s a sachet of sauce inside.

Some filmmakers try and spice things up. Director Dominic Sena, for one, really went for it with his joyously crappy techno-thriller Swordfish. The film remains a whole host of fun, but even its most ardent fan might suggest that Sena was being on the ambitious side when he shot an action sequence of data moving along cable lines underground. These sequences would not prove to be the most talked about parts of the film.

Hollywood has been having a tough time with thrillers, and I can think of few cases in a high-speed broadband world where a film has taken advantage of technology we now take for granted to dramatic effect. The problem is the speed of it. For a thriller to work, there usually has to be a sense of us knowing something ahead of the characters, or information being held back for some reason by circumstance or choice. Technology has no shrift with that, though. If something is on a computer screen, then it can be on another computer screen in seconds, with the right combination of buttons and punching the monitor. That lack of time means that hovering a finger over an enter button has some impact, but a host of tricks have been taken out of the modern day thriller. Heck, even Harrison Ford became a hacker in the end in the best-forgotten Firewall. It was more interesting when his printer didn’t work. For technology-leaning thrillers, my suggestion now is to go backwards rather than forwards. I read earlier this year that the excellent drama 20th Century Women was deliberately set in the late 1970s, because that was seen as a point where technology hadn’t fully taken over. Whilst not a thriller, it was a choice that helped the film enormously, and I wonder if a few more thrillers could follow suit. The more recent Gerald’s Game, an adaptation from the Stephen King novel of the same name, certainly does whatever it can to take technology out of the equation, and it’s all the better for it.

There are very few moments in life where I mourn the passing of the floppy disk, so responsible were they for more lost data than I’d care to mention. But that 1.44MB limit, slow transfer time and susceptiblilty to breakages makes it far more interesting as a dramatic device. I think Hollywood misses the humble old floppy too…