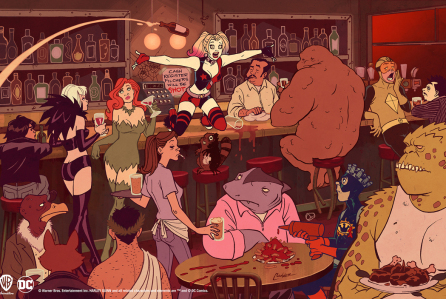 Warner Bros. is developing a Harley Quinn animated series for its upcoming DC Entertainment-themed streaming service. Harley’s star continues to rise as a character, and Margot Robbie’s Harley Quinn was a major factor in the success of the Suicide Squad movie. Deadline reports that Warner Bros. wants to see if they can convince her to voice Harley in animated form, as well.

The good news is that Harley Quinn is, of course, perfect for animation. She made her debut on Batman: The Animated Series, and her antics on the page and screen are akin to a supervillainous Bugs Bunny at times. The other news is that it comes from the executive producers behind last year’s NBC short-lived DC superhero comedy, Powerless, Justin Halpern, Patrick Schumacker, and Dean Lorey. Hopefully Jimmy Palmiotti and Amanda Conner will get to contribute in some fashion, too, as they’ve been steering Harley’s comic book adventures to ongoing success for years now.

According to Deadline, the series will be about what happens when Harley “has finally broken things off once and for all with the Joker and attempts to make it on her own as the criminal Queenpin of Gotham City.” Expect appearances from Poison Ivy and other heroes and villains from the DC Universe. The development art in this main image is also courtesy of Deadline, although they caution this may not be the final look of the show.

It’s not clear when we’ll see the Harley Quinn animated series, but we should know more once a launch date for the DC streaming service is formally announced. That service will count a live action Titans series as its flagship properly, but Harley should make for an effective early 1-2 punch of original content.

We’ll update this with more information as it becomes available.