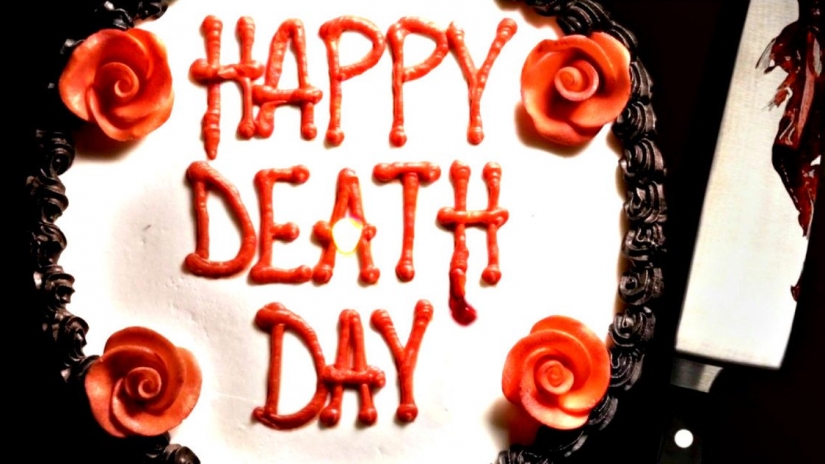 It’s a time-loop slasher laced with a hint of comedy. Here’s our review of Happy Death Day…

Imagine the obnoxious weatherman played by Bill Murray living the same day over and again, just as he did in the classic Groundhog Day, except Murray’s the target of a masked killer. If he wants to escape the seemingly unending loop of paranoia and death, he has to figure out who the killer is and why they’re so intent on sticking a knife in his chest.

This is, in a nutshell, the premise of Happy Death Day, where drunken, sharp-tongued college student Tree Gelbman (Jessica Rothe) wakes up each morning, groggy from a monumental hangover, and finds herself hunted by a murderer in a grotesque baby mask. To make matters worse, there’s no shortage of suspects, from puritanical sorority housemates to the wife of a science professor she’s been secretly dating and about a dozen more besides. Tree’s years of partying and catty remarks have, for some reason, all come to a head on her birthday – and no matter how hard she tries, simply hiding from the killer always leads her back to the start of the loop.

Just as Doug Liman’s Edge Of Tomorrow used the recurring event premise in a sci-fi action context, so director Christopher B Landon (Viral, Scouts Guide To The Zombie Apocalypse) and writer Scott Lobdell find their own creative mileage by transplanting it to a cliquey American college. All the archetypes are here – the geeky yet earnest guys like Carter (Israel Broussard), with whom Tree strikes up an unlikely friendship, the jocks, the terminally image-obsessed.

What’s at least slightly original about Happy Death Day, despite its open references to such films as Groundhog Day and Scream, is that Tree is the kind of character who’d get short shrift in your typical slasher movie, where the hard-drinking, promiscuous females tend to die early and horribly. To be fair, Tree does die repeatedly (and in varied ways), but it’s interesting to see such a self-centred character take the lead in a genre where nice, straight-laced protagonists have long since become a cliche. The role’s a real showcase for Rothe’s abilities as an actress, as her character shifts from insouciance to terror to gritty determination – above all, she brings a wry humour to Tree that’s almost worthy of Murray himself.

As a slasher film, Happy Death Day isn’t quite as convincing. The creepy mask (designed by the chap who made the Ghostface visage for Scream, fact fans) is decent enough, but the scares and hiding places all feel too familiar to raise the hackles, and gore-hounds may be disappointed by the lack of claret on display.

Nevertheless, Landon fills the movie with enough dark wit and left-turns to make this an enjoyable watch, and like so many Blumhouse movies, it looks far more expensive than its low budget might suggest. The murderer’s antics may inspire a sense of deja-vu, but the heroine and her fight to escape an exceptionally unhappy birthday are more than worth the price of admission.

Happy Death Day is out in UK cinemas now.