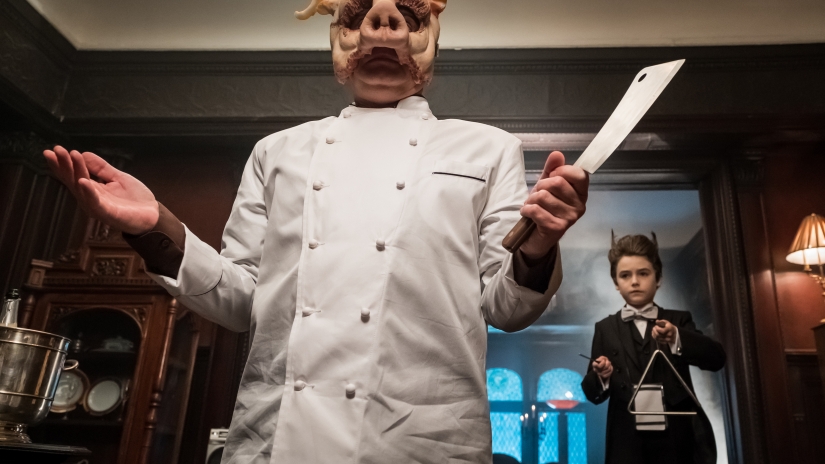 What in the name of Bill Finger did I just watch? Years ago, when I first heard that DC was doing a show based on the adventures of a young James Gordon, I never thought I’d see that series morph into a hardcore horror drama that out-gored Ryan Murphy and American Horror Story. But that’s exactly what we get this week as Gotham went full-on gross-out terror in James Gordon’s climatic confrontation with Professor Pyg.

I think most Gotham fans are on the Jerome train as far as the most popular villain of the series is concerned, but really, Professor Pyg really steps up and becomes one of the most twisted, most cringe-worthy, most intimidating villains on Gotham. Now that we have witnessed the full potent horror of Pyg, I really want to see Gotham delve into a backstory for this very modern Bat rogue. The comics have never really done a definitive origin for Pyg. I mean, the not so good Professor is one of the newest Bat villains and hasn’t been deeply explored outside writer Grant Morrison’s run on Batman. Gotham could be the perfect place to give this Bat villain an iconic origin tale. Michael Cerveris has done a note perfect job bringing Pyg to life and I really want to see more of this unique adversary.

So let’s delve into this little Pyg’s plan. It seems that Pyg has a mad-on for Gotham City’s elite, particularly Penguin. So Pyg plans to infiltrate a charity gala and feed meat pies made of the organs of Gotham City’s homeless to the city’s rich elite. And you know what? Pyg succeeds! And we are treated to a gorge raising puke fest that sees Penguin and some Gotham fat cats chowing down on the hobo pies. Even the lovely Sofia Falcone must take a bite and ewwww.

This leads to a last-second James Gordon rescue and an epic battle between Pyg and cop. Gordon gets the better of the porcine killer and wins the hearts of the people of Gotham City who now finally have a heroic cop to look up to. Unfortunately, Penguin sees Sofia’s reaction to Gordon’s arrival and is certain the ties between Miss Falcone and Mister Gordon go very deep. The jealous Cobblepot realises that it was Falcone that arranged for Gordon’s ascension to the captain’s chair. So it looks like we will have a mob war between Cobblepot and Falcone. Somehow, this week’s Gotham manages to morph from a hardcore horror drama into a crime drama in an eye blink. Impressive.

As for Gordon. This season sure has been a fascinating one for ‘ol Jimbo. Gordon finds himself doing things that are anathema to him because hey are in Gotham City’s best interest. He accepts the position of captain and betrays Harvey Bullock for the city. He accepts the corrupt endorsement of Sofia Falcone because it’s best for the city. This week, all his moral wrangling pays off because Gordon gets to save innocents from a true Gotham City monster. I mean, you can now see Gordon as a man who will one day be willing to buck due process and support a masked vigilante if it will help save his city from the monsters. This week, Gordon slays a monster and is in position to play hero cop because of some underhanded dealings, and he’s willing to do go along with the Falcones of the world if it means he is in position to defeat men like Pyg.

Penguin was another potent player in Pyg’s cannibal party. Penguin also shows himself to be multi-dimensional by killing one of the grey-haired one-percenters that refused to eat the pie even when Pyg threatened our new little urchin Martine. Remember, Penguin has taken a shine to the poor little mute boy and when the grey haired man of privilege says that he is willing to let the waif die, Penguin stabs the rich dude in the brain and proceeds to chow down on the human pie. I mean, how many people have we seen Penguin kill but an insult directed at Martine sends him into a murderous rage?

Think about all the moving parts in the Pyg drama. Penguin is jealous of Sofia’s bond with Gordon but still protects her from Pyg. Martine is threatened which shows us that Penguin does have a smidge of a heart, and all this is going on while I am fighting the dry heaves because Gotham forces us to endure a prolonged cannibalistic scene. And then Pyg sings and dances. What the what? The utter ballsiness of all this is just mindboggling.

Sadly, the Bruce Wayne half of this week’s Gotham is not as mesmerising. I am already tired of petulant Bruce Wayne. I just can’t buy that killing Ra’s Al Ghul would turn Bruce into a teen with affluenza. I think the act of murder could break Bruce, yeah, but to turn him into Bat Gone Wild? No, not buying it. This week Alfred tries to bond with Bruce by taking the future Caped Crusader on a traditional hike. Alfred does share a great story about meeting Thomas Wayne for the first time; a tale so effective it could have been a whole flashback episode. Bruce ditches Alfred and hides back home to party with Tommy Elliot and crew. I get it, Bruce is hurting, but this storyline is hurting me because I really don’t want to deal with a season of white privilege Bruce Wayne.

Thankfully, Gotham saves the day with a pure gross out, surreal bit of business that features a dude with a pig head singing while feeding homeless people to rich folk, and it’s stuff like that that sets Gotham apart from the countless other comic book shows on TV.