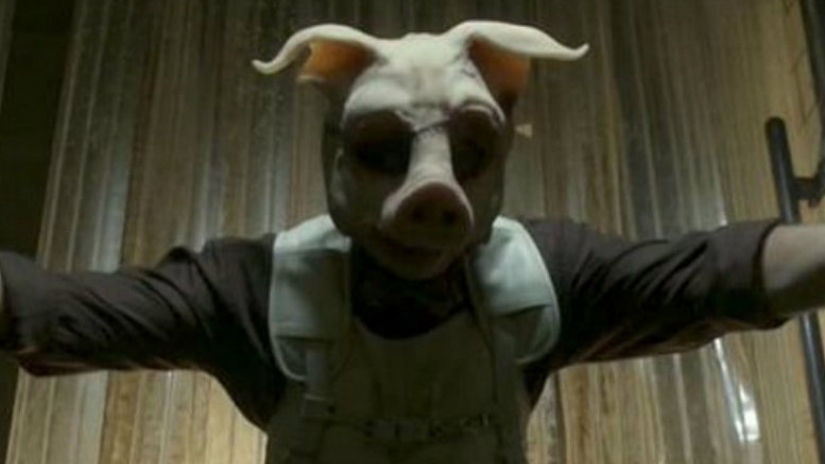 Grundy fight club, a Penguin romance, and the debut of Professor Pyg on a loaded episode of Gotham. Spoilers ahead in our review…

Last week I asked, when did Gotham become a guided tour anthology series about the DC Universe? Take a look at this week’s episode. We have a debut of a very modern DC villain, a weird Of Mice And Men riff centring on an underground fight club and a budding romance for the Penguin. How do all these diverse aspects fit together? They don’t. At all. But for some reason on some batshit strange level, it all still works.

First, let’s look at some stuff not featured this week. There is no Bruce or Alfred, no Selena (and it has been a while since we last saw the future Catwoman), and no Ra’s Al Ghul. But what we did have were three quirky storylines that made for a disjointed yet frantically fun episode.

Which brings is to the TV debut of Professor Pyg. Professor Pyg is one of those villains that is just so delightfully horrific, it’s hard to go wrong with him. I mean, it’s a psycho killer in a rotting pig mask performing nightmarish medical experiments on his victims. This week, the newly introduced porcine villain begins killing dirty cops and it’s up to Gordon and Bullock to make sure that this little piggy stays home (been waiting all week for that line). Pyg is suitably creepy with his polite little gentlemanly accent. Thankfully, the episode does not flinch away from showing Pyg in all his gory glory as the newly introduced rogue slices, burns, and blows the shit out of his victim.

When Gordon and Bullock track down Pyg, the porky threat even cuts Bullock’s throat in order to make his escape. Don’t worry, Gordon saves Bullock, but this whole thing leads to the revelation that Bullock is on Penguin’s payroll. It’s been awhile since we’ve had a meaty Bullock-focused story arc, so I welcome this disruption in the usually strong Gordon and Bullock dynamic. As for Pyg, it has always been very different to bring Grant Morrison-created characters to life. As a writer, Morrison’s creations are usually filled with metatextual trappings and have multi-faceted yet nightmarish quirks. I wouldn’t call Gotham’s Professor Pyg complex, but he was horrific and had the right degree of WTF to make Pyg a worthy and very different addition to the show.

Speaking of welcome additions, I really shouldn’t like Solomon Grundy. Grundy really is just Drew Powell cosplaying as Lurch from The Addams Family, but it’s all so darn goofy I just have to respect it. This week, Grundy becomes the champion of that cliched underground fight club we saw last week. Riddler needs Grundy to make some cash as a fighter so Nygma can pay for a surgery that will restore his lost intellect. Sure, why not? This allows Nygma to cross paths with Lee Thompkins who is serving as the medic on sight during the illegal fights.

Boy, is Gotham leaning into Grundy. The classic DC villain is every inch the swamp zombie he’s supposed to be. He bleeds swamp water, he heals from any wound, and he is profoundly mentally impaired. Having Grundy and Riddler become the DCU version of Lennie and George is just inspired madness. It even adds a bit to the Lee Thompkins character who is revealed to be using her fight club money to fund a clinic that tends to destitute victims of the Tetch virus. This aligns Gotham’s Lee to the comic book version; a charitable woman who dedicates her life to the medical care of the poor.

Grundy fight club and Professor Pyg would be enough for any show – but not Gotham. This week also featured the developing relationship between Sofia Falcone and Penguin. Last week, we saw Sofia seduce the Penguin with some goulash, but this week, the mobster’s daughter breaks a lunch date with a steaming Oswald Cobblepot. Not one to take rejection well, Penguin sends Victor Zsasz to make Sofia pay. Of course, Penguin believes that Carmine Falcone’s daughter only got close to Penguin to take him down and take over Gotham’s mobs. It turns out that Sofia is just opening an orphanage, an act of charity that melts Penguin’s cold heart.

What all this adds up to is that it seems like the showrunners of Gotham have run out of ideas for Penguin for the time being. With Butch, Nygma, and Fish Mooney out of the picture, Penguin has lost all his normal sparring partners, so it seems like this Sofia storyline is an attempt to add a new wrinkle to Penguin’s life. So far, it has fallen flat. I preferred the Sofia and Gordon relationship which had heat and ironic conflict. We’ve already had jealous Penguin and issues with his mother Penguin, so this whole thing feels like a retread.

But Solomon Grundy fight club and a cop killer in a pig skin mask feels insanely fresh, so let’s call this week a win. It is a disjointed and semi-nonsensical win, but hey, it’s Gotham.