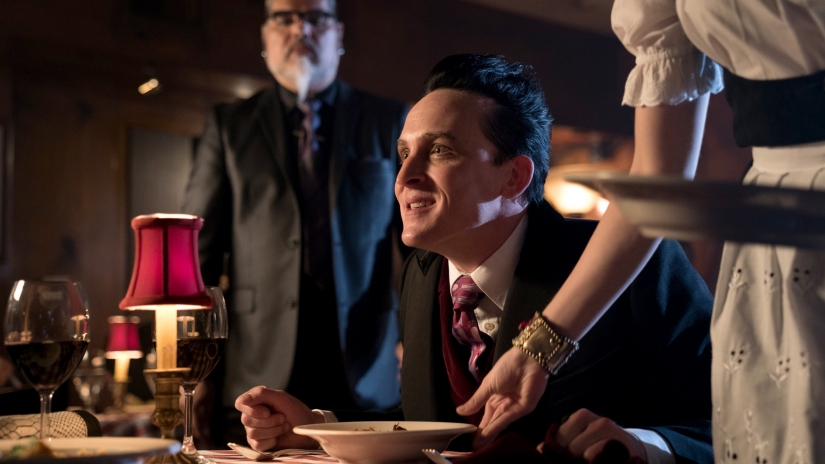 It’s been a while since I’ve done a full Gotham review, but I have been following the season with footnotes and Gotham Easter eggs. So even though I watch Gotham every week, I’ll still ask – since when has Gotham become an anthology series?

I mean, how else to explain the weird, sort of wonderful disjointed chaos this series has become? First you have the main story of Bruce Wayne confronting an imprisoned Ra’s Al Ghul. Ra’s wants Bruce to kill him for some reason. I guess the whole tired of being immortal and seeing the depredations of mankind thing has gotten to Ra’s, and there’s some sort of prophecy that only the heir of Ra’s Al Ghul can kill the Demon’s Head using the special MacGuffin dagger.

Of course, Bruce is that heir and is sorely tempted to kill Ra’s because the immortal madman killed an innocent kid last week. So Bruce confronts Ra’s and the future Batman totally murders Ra’s without hesitation. Didn’t see that coming. Of course, Ra’s provokes Bruce by swearing to kill everyone Bruce loves if the future Batman doesn’t plunge the dagger in his immortal heart. But by gum, Bruce does it. I guess this can be the reason Bruce never kills again? Or else it means that the showrunners have no earthly idea where to take the Ra’s storyline without being derivative of Batman Begins or Arrow and decided on the Bruce Wayne murderer direction. Hey, why not?

Alfred and Gordon bust in just as the murder goes down which leads to a great speech by Alfred about how much he believes in Bruce’s goodness and which proves the fact that the sincerity of Gotham’s Alfred Pennyworth can make even the most ill-conceived plot direction work through sheer force of charm.

That would be enough for one episode, but not Gotham. The show is nothing if not busy, and they added another villain to the mix. This week, the story of Butch continues to go in the direction all old school DC fans knew was coming. At the end of last season, it was revealed that Butch’s real name was Cyrus Gold, a name that DC faithful will recognize to be the real moniker of the classic DC villain Solomon Grundy. And sure enough, Butch is dumped in a toxic swamp (nice call back to Indian Hill) and transforms into the zombie swamp monster of DC lore. And I’ll be damned if Butch doesn’t look like he stepped right out of an episode of Super Friends. As Grundy, Butch lumbers his way back to Gotham City, and sure enough, sparks up a partnership with the still mentally impaired Edward Nygma.

I would totally watch a buddy sitcom with Riddler and Grundy and by God, the pairing of Ed and Butch should not work in a million years. But it really does. I mean, I was guffawing at the antics of these two villainous dopes. I think Gotham is entertaining by sheer force of desperation to find story directions in a series that really should have fizzled out plot wise three years ago. But here we are with a pairing of a brain-damaged Riddler and a fat swamp zombie and it works. Don’t ask me why? It just does. I mean, I’ll take Grundy and Riddler munching down hot dogs together over the Ra’s Al Ghul melodrama any day.

You’d think Bruce Wayne killing Ra’s Al Ghul, the coming of Solomon Grundy, and a daring rescue by Gordon and Alfred would be enough for one episode, but we have a Sophia Falcone and Penguin story arc to deal with. It seems that Sophia, the newest fatale in Gotham City, wants to get on Penguin’s good side. So Sophia invites Oswald to a Hungarian restaurant and feeds him goulash just like Mama Cobblepot used to make. Oswald is so moved that he allows Sophia to give foot massage and what the hell am I even talking about? The whole thing is so utterly ridiculous I just can’t be mad at it.

No Selena or Ivy this week, so I guess Gotham couldn’t fit everything in one nutty episode, but damn, you have to give this series credit for just existing on sheer will power. I mean, this week’s episode switched tones so many times I got whiplash. From the dead serious Ra’s Al Ghul stuff to the classically silly, Gotham just keeps on being controlled chaos. Now, make no mistake, this series is a disjointed mess seemingly without direction, but it’s an entertaining disjointed mess.

Oh yeah, at the end of the episode, Grundy decides to join an underground fight club and the medic in residence is Lee Thompkins because why not? It’s not like anything else on this series makes sense… and that’s kind of the way I like it.