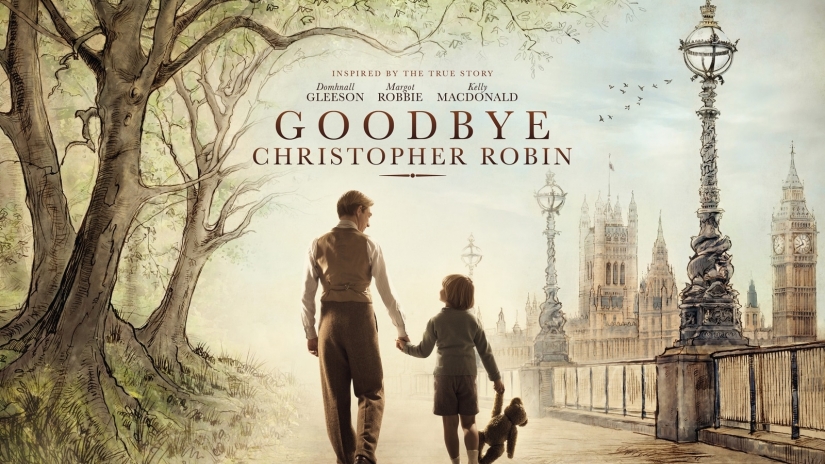 Anytime something bills itself as the ‘untold story’, there’s a danger it means the quite boring story that we’ve jazzed up and embellished a bit. What starts as a true tale becomes a slightly unbelievable feast of easter eggs, nudges and winks relating to whatever intellectual property the film is tied to.

What’s very interesting about Goodbye Christopher Robin – the true story about the creation of beloved children’s books Winnie The Pooh – then, is that while the trailers made it seem like one of those bland, disappointing biopics, the film offers up something a little different.

The story of Christopher Robin (Will Tilston), the real child behind the book’s own figure of childhood, isn’t a particularly happy one. While the world saw him as the illustrated bear’s best friend and the happy child of author Alan Milne (Domnhall Gleeson) , at home he was treated with a mixture of indifference and confusion by his parents, both of whom relied on their devoted nanny (Kelly MacDonald) to care for ‘Billy Moon’ as they call him.

Alan has been left traumatised by his experiences on the battlefield and, upon returning home, his socialite wife Daphne (Margot Robbie) decides that he needs something good to offset the bad. This leads them to parenthood, and both soon realise that they’re not particularly suited to the role. Still, unhappy and disillusioned by their fabulous lifestyle, Alan moves his family to the countryside. It’s there, in the forests surrounding their idyllic but remote home, that the spark of imagination ignites.

The birth of Pooh and his friends is pretty straightforward – while she’s not the best mother by modern standards, Daphne dotes on Billy in the ways she knows how. He is showered with toys in place of friends, and forms a strong bond with Piglet, Tigger, Eeyore and the rest. When he and his father are suddenly left alone at the house, they are forced to become each other’s person, and through their walks in the sprawling woods, they create their own 100-acre paradise.

So Goodbye Christopher Robin is the story of a father and his son finding their own happy world, but it’s also about the consequences of neglect, a nation’s collective grief following a terrible event, and the power of imagination to both heal and hurt those around us.

The film begins with what we can assume is the start of World War II (though the truth behind this moment doesn’t become clear until later), which adds greater meaning to Alan’s near-obsessive desire to prevent history from repeating. We as an audience know he’s correct about his assertion that nothing has been learned from the experience, and that knowledge ties the story to heightened emotions of our own era.

It’s interesting in itself that 2017 films like this and Wonder Woman are choosing the war as such a central thematic launching pad. It’s not a period of history as clearly remembered as its successor for the heroes and villains that Hitler and the Nazis provided popular culture with. We focus instead on the trauma of such a pointless endeavor, of which Alan reminds us during his outburst at a dinner party.

In times of trouble we turn to stories, sometimes satirical attacks on the current state of the world and sometimes – as it is here – innocent tales of home and family. It’s a way for us to both escape the terrors of the outside world and come to terms with the things we might have lost.

But with success comes fame, and poor Christopher is soon thrown into the world of celebrity when all he really wants is to have fun with his father. Once Pooh has been published, the walks stop and Alan retreats back into his shell. The illusion is shattered, just as it is shared with the world.

Much of Goodbye Christopher Robin is utterly charming, with just enough of a darker edge to stop it from becoming too twee. Gleeson is excellent in a role the requires him to be ultimately reserved and unemotional, and Robbie is an absolute delight throughout. Flighty and overdramatic, Daphne is both the comic relief and the emotional heart of some key moments. It’s lovely to see both of these actors doing something so different.

The film falters when it allows Christopher to grow up and become a teenager (Alex Lawther) struggling with the legacy of his childhood stories. It’s a third act that’s hindered by its dual responsibility to tell the truth of events and tie everything up into a nice satisfying bow, and the film may have been better served with an extension of the middle in which the books first rise to fame.

Goodbye Christopher Robin is overall a quiet but uneven film about people doing their best but unintentionally damaging those around them anyway. There’s something to be said for the simplicity of that concept, just like there is for the whimsical tales of a stuffed bear, his woodland pals, and his very best friend Christopher Robin.

Goodbye Christopher Robin is in UK cinemas from Friday.