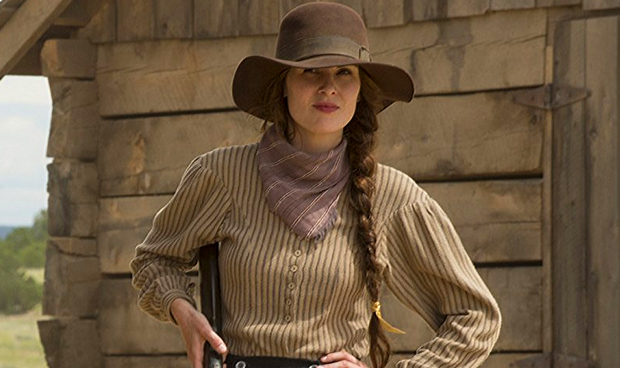 Netflix’s new offering Godless looks to put an intriguing twist on the conventional concept of the Western.

With Steven Soderbergh, indie darling and esteemed big screen blockbuster director of the Ocean’s Eleven film franchise, attached as an executive producer to the 7-episode limited series created by Scott Frank, look for some twists and turns not traditionally found in the arid, dusty, tumbleweed-strewn genre.

The trailer focuses on the trials and tribulations of an outlaw, named Roy Goode (Jack O’Connell). With the events of the series taking place in the 1880s American West, we see intermittent Kung-Fu-esque flashbacks to Roy’s upbringing, where he was raised by anti-hero outlaw Frank Griffin (Jeff Daniels) – and with whom he eventually becomes partners in crime.

However, it appears that the paternalistic partnership has dissolved, turning the duo into enemies, as Frank is hunting Roy down. The evasion leads the on-the-run Roy to La Belle, New Mexico, a town made up exclusively of women. There, Frank is offered hospitality by Alice Fletcher (Michelle Dockery), with whom he also forms a potentially romantic relationship. Of course, we can expect trouble to find its way to this southwestern Themyscira of sorts, with the trailer showing a montage of the kind of fiery, gun-slinging, train-crashing woe that lies ahead.

Names such as Kim Coates (Sons Of Anarchy), Jeremy Bobb (The Knick) and Thomas Brodie-Sangster (Game Of Thrones) also appear.

For Dockery, the longtime star of the early-20th century aristocratic UK television hit Downton Abbey, Godless  is the just latest in a series of type-cast-smashing roles, coupled with her starring run as a cunning thief on the TBS crime series, Good Behavior (which returns for season 2 on October 22nd), along with film roles in the 2017 mystery drama The Sense Of An Ending, the 2015 Ryan Reynolds-starring sci-fi film Self/Less and the 2014 Liam Neeson-on-a-plane actioner Non-Stop. However, for co-star Jack O’Connell, this will stand as his first serial television work since his 2009-2013 run on UK teen drama Skins, having since appeared in an array of films, notably as the star of the 2014 WWII prisoner drama Unbroken, the 2014 riot drama ’71, the 2016 star-studded crime thriller Money Monster and the 2014 quasi-historical sequel 300: Rise Of An Empire.

Godless is primarily the brainchild of Scott Frank, who wrote the first episode and serves as executive producer and director. He is joined by executive producers Steven Soderbergh and Casey Silver. Frank is the director and writer of the Liam Neeson-starring 2014 crime drama A Walk Among The Tombstones and worked on the screenplay to Hugh Jackman’s 2017 Wolverine swan song, Logan, and his 2013 solo outing, The Wolverine, as well as the 2008 heartstrings-pulling comedy Marley & Me, 2004 remake Flight Of The Phoenix and the 2002 Tom Cruise-starring sci-fi blockbuster Minority Report.

Godless gets ready to “love what death can touch,” when it makes its debut on Netflix on November 22nd.