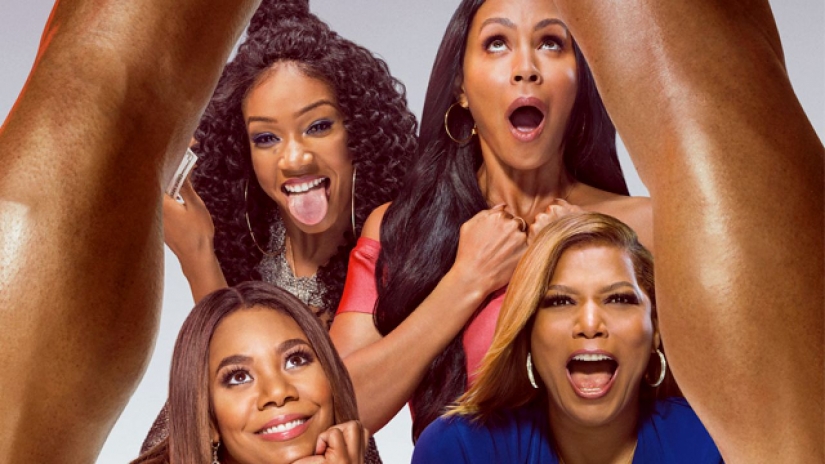 Girls Trip is the comedy surprise of the year – and very, very worth seeing.

If you’ve seen the trailer and read the plot summary – four very different friends reunite for the holiday of a lifetime – you might have some preconceptions about Girls Trip. During the opening five minutes of the film those preconceptions may feel initially deserved and warranted.

First, there’s our central group who initially seem to tick all the boxes of archetypal figures in ‘wild-night-out’ comedies. At the centre we’ve got Ryan (Regina Hall), a woman who seems to have it all. Then there’s her friendly foil Sasha (Queen Latifah) who has a secret. Then Lisa (Jada Pinkett Smith), the parent who’s become a bit stuck in her ways. Then finally there’s Dina (Tiffany Haddish), the wild card. There’s a cringe-worthy voiceover accompanied with various ‘snapshots’ of the founding college years of the ‘Flossy Posse’. You will the film to get better – then it does.

For once the movie establishes its premise – when celebrity writer Ryan is offered an all-expenses VIP work opportunity at the Essence Festival in New Orleans she realises it’s the perfect opportunity to reunite her beloved group who have grown apart over the years – and gets to NOLA, well that’s when it really gets going. The film has an incredible hit-rate when it comes to its gags, with so many truly laugh out loud moments. There’s also cringe moments, sweet moments, empowering moments and the underappreciated ‘I’m-not-crying-I-promise’ moments.

The most shorthand way to describe Girls Trip is describing it as ‘the female Hangover’. That would be doing the newer film a true disservice, though. True, there are a lot of Hangover-esque shenanigans but they’re played with such charm that it’s hard to draw any comparisons between the two. Having four female leads is something of a rarity in Hollywood cinema, let alone four women of colour, although 2017 has seen progess with Hidden Figures not only being nominated for three Oscars but also being the top grossing best picture nominee with a box office of $230 million. It seems obvious that Hollywood should be telling more diverse stories, and now that it’s seen the numbers for Hidden Figures that will undoubtedly be followed up with those from Girls Trip, hopefully they’ll finally take the hint.

They’d do no better than looking at Girls Trip for how to tell a female led comedy which, aside from last year’s underrated Bad Moms, is the first to serve a female comedic ensemble as well as 2011’s Bridesmaids. The reason Girls Trip works so well is the fact that it feels like a real friendship, there’s a magical harmony between the four leads that is so strong that even on the few occasions when the jokes aren’t so funny you’ll find yourself laughing hard anyway.

Although all four women more than hold their own, a special mention has to go to Haddish, whose Dina is a hilarious creation that she fully commits to. Granted, she is the constant bringer of mass destruction to her friendship group, but she manages to be so charming and endearing – and utterly hilarious – that they/we forgive her for everything. The absinthe scene in particular caused me to laugh so hard that I was worried I was going to hurt myself in the process.

Girls Trip is the comedy movie of the year that we didn’t realised we needed. It’s frequently filthy fun that provides countless laughs and all the emotions. There’s meaning behind the laughs though, a celebratory message of female friendship that will resonate universally. The primary message, to quote Leslie Knope from Parks And Recreation, is ‘Ovaries before Brovaries’ – a message which is alarmingly infrequent in mainstream cinema. What could have been a by-the-numbers formulaic comedy movie becomes something else, a beating heart that makes the film all the more endearing and leave you wanting to celebrate just as much as the central quartet.

My advice? Get your own Flossy Posses together and get to the biggest, nosiest screening you can find and get your cackle on.