Game Of Thrones season 7 episode 6 review: Beyond The Wall 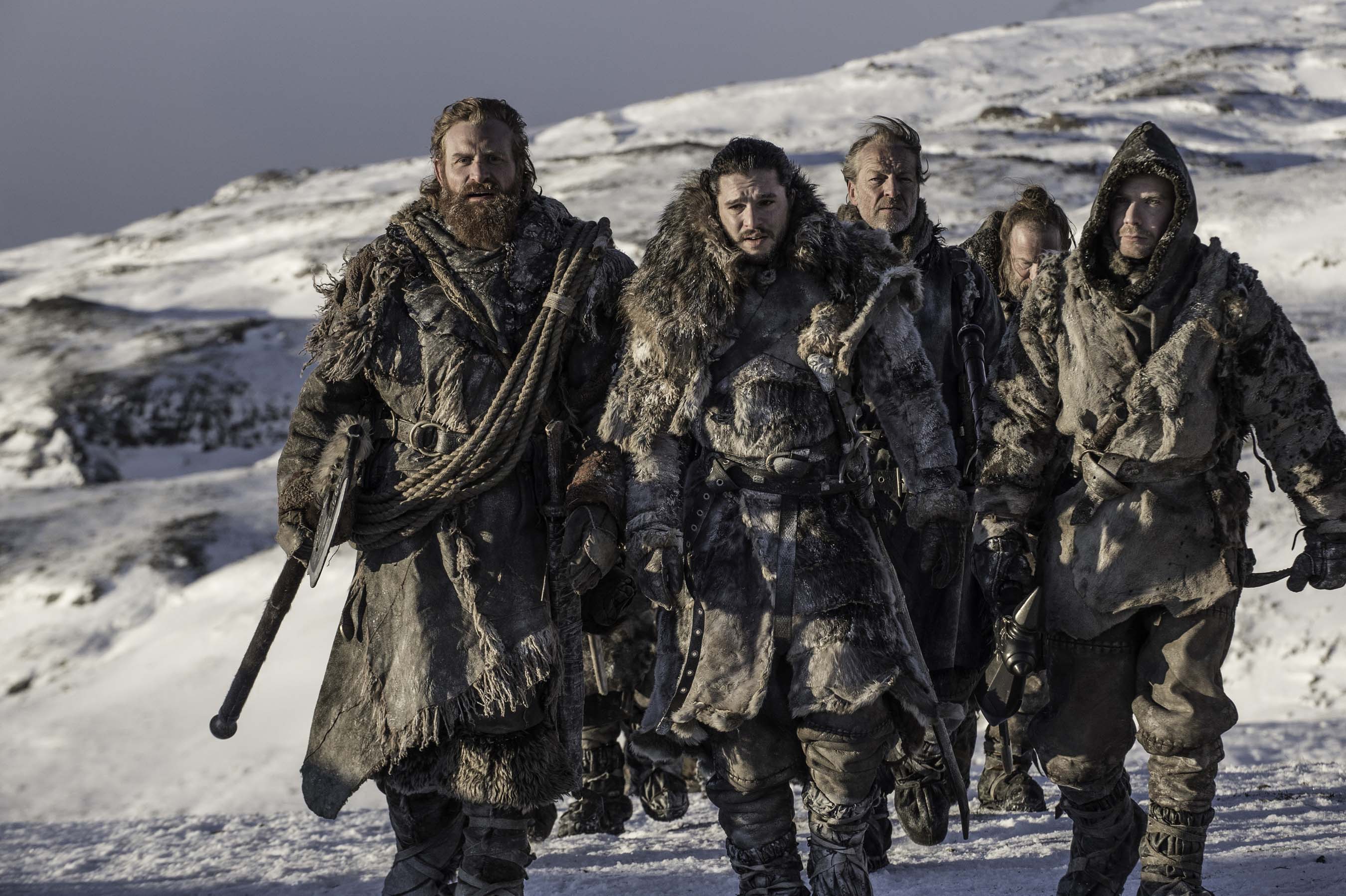 The action scenes in the latest Game Of Thrones episode are a masterpiece of choreography. Spoilers ahead…

Tension. Teeth-grinding tension. Whether it’s the other side of The Wall or in the ostensibly friendly confines of Winterfell, there’s no real reason to relax in Westeros. There’s definitely not reason to let your guard down. Even if the person you’re having an argument with is your own flesh and blood, that doesn’t mean she won’t put a knife in your belly and then steal your face with the help of strange foreign magic.

Beyond The Wall is two different stories running simultaneously, which is pretty standard on Game Of Thrones this season. The Magnificent Seven are north of The Wall, looking for the army of the dead, and the two Stark daughters are at one another’s throats thanks to some clever manipulation courtesy of Littlefinger, who has never met a person he wouldn’t stab in the back (though not literally). Despite the seven’s hunt for a wight involving several action scenes, the moments that stick in the mind longest actually involve the characters interacting with one another; despite mostly being two people talking to one another, the scenes in Winterfell stick in the mind for the simmering undercurrent of violence with every interaction between Sansa and Arya.

Unlike most of the rest of this season, there aren’t a lot of surprise moments involving out-of-nowhere battles. Most of what happens is telegraphed ahead of time. The zombie bear that attacks the group of name characters doesn’t just come out of the blizzard and start killing, you can actually see the bear charging at the delicious flesh-and-blood Westerosi before it attacks, though it does skulk around pretty effectively after that. (Fittingly, the bear is dispatched by the former Lord of Bear Island, Ser Jorah Mormont.) Jon and company spot a small contingent of wights led by one White Walker, and Tormund dutifully points out that they’ll find out soon enough where the rest of them are before the real army of the dead shows up later in the episode. Tyrion talks about the ignorance of being a hero, and there’s Daenerys, riding off on the back of her dragon to be a hero when Jon and company need a little deus-ex-Drogon to get the captured wight and the rest of them south of the wall.

That isn’t necessarily a slight against David Benioff and D.B. Weiss, who are credited with writing tonight’s episode (along with most of the season). You can’t jam a surprise in every episode, because then people will start to expect surprises. That actually might be the case with me as I watched the episode for review. The bigger shocking moments are ones I expected to happen, simply because they’d be crazy and this is a show for which no spectacle is too big.

Fortunately, Benioff and Weiss were able to reach out and bring back a director who knows his way around crazy spectacles, in the form of the returning Alan Taylor. He handles the big scenes masterfully without turning too much attention away from smaller moments. The initial attack by Jon and company on the small contingent of wights is a well-crafted trap, and a fairly chaotic battle scene despite being over fairly quickly. The bigger battle scene, in which the men flee from the dead and scamper across a frozen lake, is amazing-looking. The overhead shot of the Westerosi living fleeing from a huge army of the dead looks great, and when the ice gives way beneath the masses of bodies and zombies plunge into the lake, it looks terrific from overhead, like a demented Busby Berkeley dance scene involving hundreds of dead people.

Interspersed throughout the episode are some interesting character moments. Jon Snow’s group of marauders are really a weird batch of people, with a wildling, a pair of religious fanatics, a disgraced member of the King’s Guard, an exile, a bastard blacksmith, and a reanimated Lord Commander of the Night’s Watch (along with multiple disposable redshirts). The way these seven play off one another serves to highlight just how connected they are to one another, despite being vastly different. Gentry’s still sore about being sold to the Red Woman; the Hound is there to tell him to stop whining about almost being killed when Beric’s been killed six or seven times. The Hound and Tormund have a very funny conversation about Tormund’s “girl back home” Brienne and his desire to have giant monster babies with her that would take over the world. Jon and Jorah have some very pleasant moments together talking about Jeor and their relationship with him. Jorah and Thoros reminisce about their time together fighting at The Reach.

It’s enjoyable to see the characters bounce off one another, and it serves a further purpose: you can’t predict exactly who is going to live and who is going to die. Any time you have a character talking about the girl back home, it’s typically a death sentence. Ditto whenever a character gets to expand a little on his life, like Beric does in conversation with Jon about being brought back to life. Jorah coming to terms with what he did and how he hurt his father? Death. Gendry being the young guy on his first mission with the team? That character dies in every action movie. It’s nothing new, but it’s fun just the same.

There’s a certain satisfaction to be had in watching the tale spin out, and while there’s some inconsistency in terms of characterisation (Jon’s whole plan to get a wight won’t make a difference to Cersei, even if it might change the minds of everyone else at court once they get a whiff of the thing), it’s all worth it for the big battle. Dany and her three dragons swoop in and burn hundreds of zombies and thaw the lake to keep Jon and company safe. Jon’s foolish honour keeps him fighting and struggling when he should be joining the rest on the back of the dragon trying to escape. Jon is rescued from certain death by a returning uncle Benjen, who promptly sends Jon away on his horse while squaring off with wights and getting ready to fulfill his unnatural purpose by dying so that others might live.

Of course, the eternal debate between Dany and Tyrion about how active a role she needs to play in the war ends up becoming a big mistake for Daenerys. Sure, she sees the threat that the army of the dead poses first hand, and she gets the wight she needs to bring Cersei Lannister to the bargaining table without wasting time and effort slaughtering the whole Lannister army, but she also manages to lose one of the three most dangerous things on the planet in the process. She springs to the defense of Jon and the others, and she loses a dragon to a crazy-looking ice spear. She doesn’t act, and she loses her Tyrell allies and her Greyjoy navy. She blames her mistakes on Tyrion, and on those around her, but perhaps she’s learning that war isn’t something that can be controlled, and fighting professional armies is greatly different than killing a bunch of silk-wearing slavers with a eunuch army.

Watching the dragon go careening out of the sky and landing in the frozen lake is awesome in the truest sense of the word. It inspires awe, in this case awe at the skill of the special effects crew to animate not only the dragon, but the gushers of dragon blood spraying out of it as it falls to earth. The dragon doesn’t stay dead for long. After all, we’ve already been shown a zombie bear, and zombie horses. The pacing is masterful; we hold on a shot of the wights dragging giant frozen chains, slowly a giant dragon corpse rises into view, and then the Night’s King steps across the field to lay one hand on the giant dead snout of Viserion.

You know it’s coming. The music swells ominously. The Night’s King holds, and holds, and holds… and then it happens. One great big dragon eye popping open, revealing an unnaturally blue eye. Suddenly, the balance of power isn’t quite as tilted towards the living, because the dead have an equalizer (plus giants). Cue the chills.

US Correspondent Ron Hogan really hopes that the friction between the Stark girls is a show for Littlefinger’s benefit, and not real friction between them. Then again, Sansa’s still trying to rule and Arya has been too busy training to kill to grow emotionally. Find more by Ron daily at PopFi.