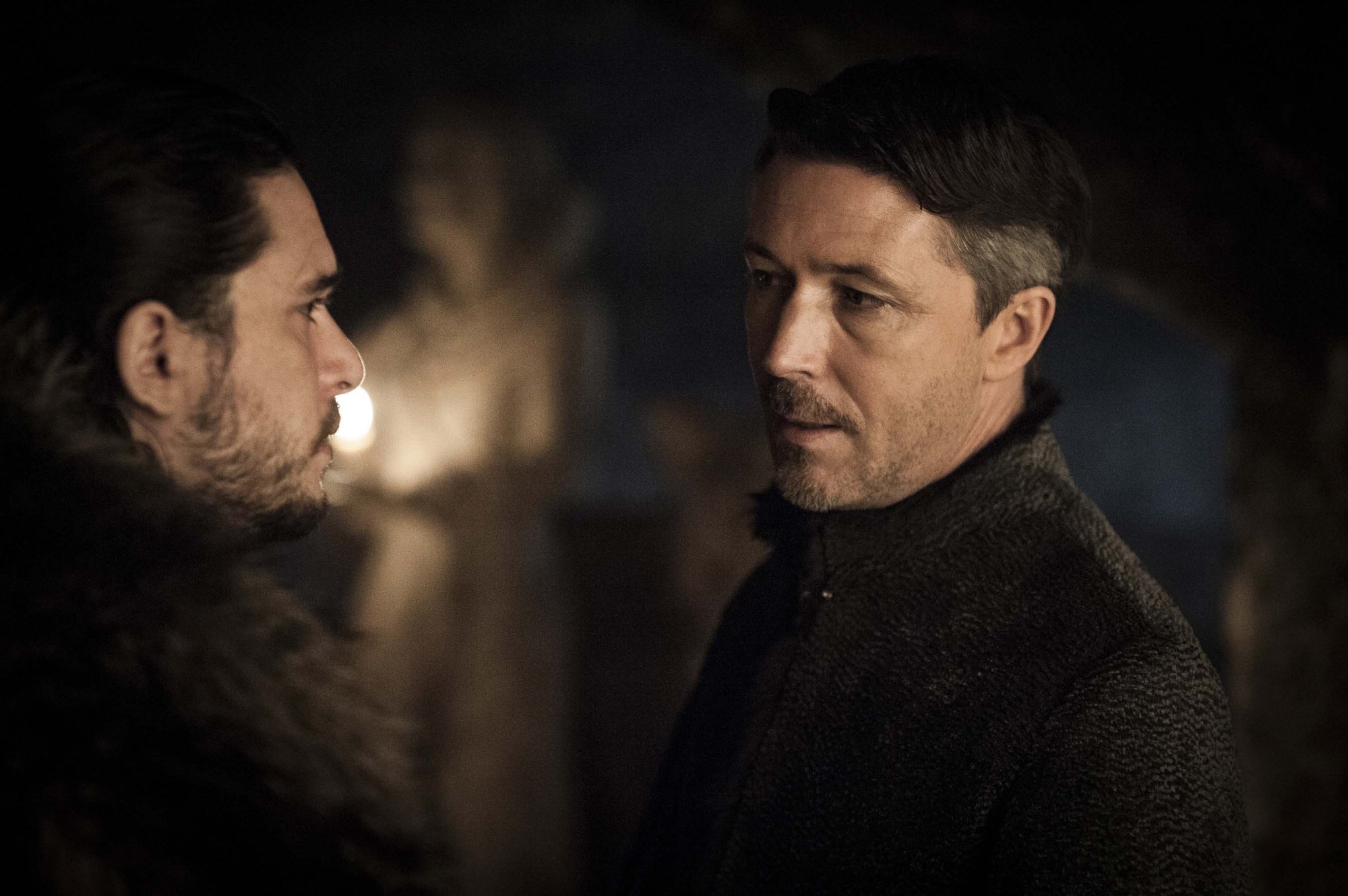 Some of the background to this week’s Game Of Thrones episode a bit fuzzy? Here are a few reminders. Spoilers…

If you struggled to dredge up fuzzy memories of season one at any point during this week’s Game Of Thrones episode, or like to watch while doing the ironing (and therefore miss the odd bit when tackling a particularly tricky collar), we have you covered.

Here’s our spoiler-filled review. And below is a handy recap of the main references and background expanations relevant to Stormborn…

What’s the beef between Dorne and the Lannisters again?

To recap – Elia Martell was married to Prince Rhaegar Targaryen. When Robert the Usurper took the Iron Throne from Rhagar’s dad, Mad King Aerys, Tywin Lannister ordered The Mountain to kill Elia and her two royal heirs. He did, brutally, and that earned the Lannisters the enmity of Elia’s brother Oberyn. In revenge for his sister’s murder, Oberyn fought the Mountain as Tyrion’s champion during his trial for the murder of Joffrey, but lost. That upset his paramour Ellaria Sand, who poisoned Cersei’s daughter Myrcella Lannister in revenge.

Has the show ever been to (Lannister family seat) Casterly Rock?

Not yet, but it’s due to now that Dany is sending the Unsullied to attack it. With all that Lannister gold, that’s bound to be one hell of a set.

When did Varys try to poison Daenerys?

Back in season one when Dany was married to Khal Drogo and pregnant, a wine seller in a Vaes Dothrak bazaar offered Daenerys a cask of Arbor wine as a gift. Ser Jorah Mormont stopped Dany from drinking the wine, realising that it must be poisoned. He worked this out because he had that day received a pardon from King Robert Baratheon, ending his exile from Westeros (he’d earned the death penalty there for taking part in the banned slave trade), which meant his services as a spy must no longer be required, i.e. Dany was soon to be out of the picture.

Having learned of her pregnancy from Ser Jorah, King Robert had wanted Dany killed to thwart her heir and any attempt on his throne. He ordered the assassination attempt, and his Small Council (which included Varys) promised a lordship to whoever murdered her. Varys did what had to be done.

Is Missandei a grammar pedant?

She may well be, but her correction of Dany’s translation was important. Since Melisandre first spoke of ‘the prince who was promised’, i.e. the one destined to defeat the darkness and bring the dawn, we’ve (understandably) assumed she’s looking for a man. The Red Priestess thought it was Stannis Baratheon, but was duly proved wrong when that all went tits up. (Seeing as she’s been around for centuries, who knows, she may have had plenty more wrong bets before she arrived at Stannis.) Next, Melisandre thought it was Jon Snow. Knowing that the original prophecy doesn’t specify the gender of ‘the prince or princess who was promised’ obviously opens up the possibility that it’s, say, Dany.

That’s the idea. His secret dad was Dany’s older brother Rhaegar, and his mum was Lyanna Stark, sister to Ned. He was raised as Ned Stark’s bastard for his own protection from King Robert, who loved Lyanna Stark and hated Rhaegar, the man who abducted her.

“He sounds like quite a man” says Dany of Jon Snow when she learns of him becoming King in the North. Surely she’s not going to fall for her own nephew? Well, a bit of incest wouldn’t be unheard of in Game Of Thrones, though Jon’s morals are considerably more intact than those of Cersei and Jaime.

Why hasn’t Jon been sent a raven about Bran arriving at Castle Black yet?

What happened when Jon and Tyrion met for the first time?

Back in season one when King Robert arrived at Winterfell to offer Ned Stark the role of Hand of the King, Tyrion travelled with the Lannister/Baratheon party, but split off from them to visit a local brothel. Jaime told him he had to come to the Winterfell feast, but reluctant, Tyrion dawdled outside the hall drinking, which is where he first met Jon Snow. It was a short but memorable meeting, what with Tyrion calling Jon a bastard four times in as many lines and advising him to never forget what he is and to wear it like armour so it can never be used to hurt him. “What the hell do you know about being a bastard?” asked Jon. “All dwarfs are bastards in their father’s eyes” answered Tyrion, a line he quoted in the letter he sent to Winterfell this episode.

The pair shared more scenes as Tyrion travelled to the Wall with Jon and the Night’s Watch, imparting his wisdom along the way. The Imp told Jon “A mind needs books like a sword needs a whetstone”, and “everything’s better with some wine in the belly”, and saved his life when he interrupted Grenn and Pip holding a knife to Jon’s throat. Tyrion also taught Jon to check his medieval privilege and share the benefits of his aristocratic education with his less well-off brothers in the Night’s Watch. You might even say that Tyrion taught Jon to lead.

She was forced to marry him in season three, but unlike her other forced marriage, this husband didn’t mistreat her (unlike his repulsive nephew) and reassured her that she would never be forced to consummate the marriage unless she wanted to. After Joffrey’s death in season four, Sansa escaped King’s Landing thanks to Littlefinger, and Cersei still believes her and Tyrion responsible for her eldest son’s murder, even though she really has Olenna Tyrell to thank for that.

Why does Jon hate Littlefinger so much?

He was raised by Ned Stark not to trust him, and Ned was right on the money: Littlefinger was the one who arranged for Sansa to marry sadistic, murdering rapist Ramsay Bolton.

Why has it taken everyone this long to realise that Dany’s dragons could be useful in the fight against Wights?

Because they didn’t all necessarily believe either creature truly existed, I suppose. Davos finally put two and two together this episode: “Fire kills Wights, you told me. What breathes fire?” Now somebody just has to stop Cersei from shooting those useful beasts with her weapon of mass dragon destruction. Why is Grey Worm shy about getting undressed in front of Missandei?

Like all Unsullied soldiers, he was castrated as a child, pillars and stones. Didn’t let it stop him though. Go on, my son.

What happened the last time we met Ser Randall Tarly?

He came across a lot worse. Compared to Cersei’s anti-Dany propagandist speech (all true, admittedly – she did crucify all those men and fed those others to her dragons), Randall Tarly, aka Samwell’s dad, seemed almost reasonable. When we first met him last season, when Sam brought Gilly and Little Sam home to Hornhill, Randall acted like a massive bigoted bully, hence Sam stealing away in the dead of night and nicking the family Valyrian steel.

Is the book the Arch-Maester is writing the story we’re being told?

To judge by his title ‘A history of the wars following the death of Robert the First’, it would certainly seem so. Sam suggests a more poetic name. A Song Of Ice And Fire, perhaps? Or maybe Game Of Thrones?

Don’t they have anaesthetic in the Seven Kingdoms?

They have an opiate, Milk of the Poppy, to dull pain but perhaps Sam didn’t have any on him when he set about peeling off Ser Jorah’s Greyscale. Shudder.

The Old Bear Jeor Mormont was the Lord Commander of the Night’s Watch until a group of his men mutinied against him (foreshadowing the similar betrayal of Jon Snow) at Craester’s Keep. Jon and his brothers avenged Mormont’s murder and killed the mutineers, inadvertently allowing Bran, Hodor, Meera and Jojen to escape at the same time. How did Princess Shireen contract Greyscale?

Ser Jorah caught his Greyscale from a tussle with one of the Stonemen in the ruins of Valyria, but Princess Shireen Baratheon (RIP) contracted hers as an infant from snuggling her cheek up to a wooden doll her father bought as a gift from a Dornish merchant. Though not explicitly stated, as the doll was dressed in Baratheon colours, it’s inferred that it had been deliberately infected by one of Stannis’ enemies. Healers were able to stop the spread of her disease, as Sam tells the Archmaester in Stormborn. Maester Pylos, incidentally, the author of the book of medicine Sam uses in the episode, was the Maester on Dragonstone in George R.R. Martin’s A Song Of Ice And Fire series.

What did Arya mean when she told Nymeria “that’s not you”?

Arya’s words have been explained by the showrunners here. It’s a call-back to season one, when Ned Stark talks about Arya’s future as a fine lady and the wife of a lord. “That’s not me” says Arya. When Arya sees Nymeria for the first time since sending her off into the wild for her own protection in season one and asks her to come and be her companion once again, she realises the Direwolf has her own wild life now, so that domesticated fate is ‘not [her]’.

What happened to the other five Direwolves?

To recap: Robb’s Direwolf Grey Wind was killed at the Red Wedding and his head sewn onto Robb’s body. Sansa’s wolf Lady was beheaded at Cersei’s insistence after Nymeria nipped Joffrey when he threatened Arya with a sword in season one. Arya sent Nymeria off into the wild to protect her from Cersei’s wrath. Bran’s wolf Summer was killed by Wights while Bran and Meera escaped the Cave of the Three-Eyed Raven. Rickon’s wolf Shaggydog was beheaded when Rickon was captured by Smalljon Umber. Only Ghost and Nymeria remain alive.

Was Ellaria Sand coming on to Yara Greyjoy to form a political alliance or just for fun?

Both, probably. The Dornish will are non-stop nooky fans, but Ellaria also loves a good scheme.

Which of the Sand Snakes did Euron kill?

Obara (spear-girl) and Nymeria (whip-girl) were killed while Tyene (dagger-girl) was taken prisoner along with her mother, Ellaria, and Yara Greyjoy.

Is Hot Pie a survivor?

He’s a survivor. He’s gonna make it. He will survive. Keep on survivin’.