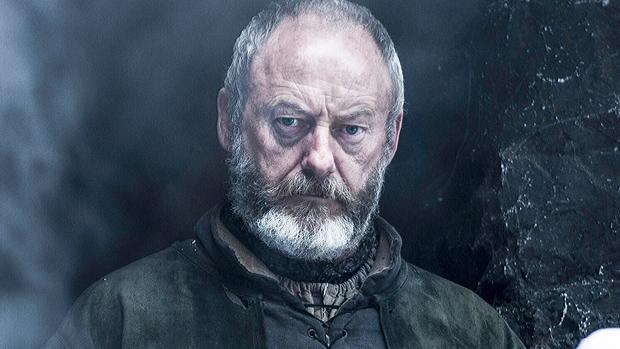 Liam Cunningham tells us why we should all be more like Davos Seaworth, and what tore Kit Harington’s soul apart on the show…

A policy of honesty and bravery has taken Ser Davos, the Onion Knight, a surprisingly long way in the game of thrones. He’s a loyal follower, and a rare thing in Westeros – a man concerned with doing the right thing.

Before season seven started, we took part in a brief round-table chat with Liam Cunningham that we’re now allowed to share. Here’s why he thinks we should all #bemoreDavos.

Warning: fruity language ahead. (Well, once a smuggler…)

Listen, I wish I was as brave as Davos. I mean, Stannis sent him off to be killed and when he went down to talk to him Stannis said ‘you don’t care much for your own life do you?’ and he went ‘not really’ and it’s not because he’s depressed.

I think we should all try to be like Davos because he says the right thing when it’s difficult, he doesn’t hide behind things just to make his life a little easier. What I really like about him is the fact that he’s from incredibly humble beginnings, he’s a small-time crook who came from the worst slum in King’s Landing, Flea Bottom—even a terrible name—and yet he has a nobility about him, he has more nobility than the Lannisters and the Martells and the people who’ve had money all their lives and status and education and privilege, he has more nobility than probably the lot of them put together.

Do you enjoy his status as a fan-favourite?

Yes, he’s a favourite, but the way I look at it, Joffrey was a favourite, he was the favourite person that you wanted to hate. When he came on screen you’re going ‘you fucking bastard!’ but you loved watching him. It was the same with Ramsay when he showed up, you hated him, you don’t want to be like him, but you love seeing him because you know he’s going to cause fantastic drama.

I always like to use the example of Arya who’s held up as a role-model, specifically for young girls, I mean this kid is a serial killer! She has a fucking list of people in her pocket she’s going through the show to kill, and people are going ‘good on you, girl!’ [laughs] I mean, are you fucking mad, she’s a serial killer, people! That’s how clever the writing is on this.

Are you able to enjoy the show as a fan?

I watch it at home on the sofa with my family, they’re all saying ‘when are you getting home? We’re having to try and avoid social media so we don’t find out what happens’ and I have to try and get my ass home so I can watch it because I see it at the same time as everybody else, apart from the first ep.

Carice [Van Houten] said a good thing – when she watches it, she said when she shows up on screen as Melisandre, she goes [disappointed] ‘awwww’. Like she’s ruined it! She says she’s ruined it for herself because she’s watching herself and it takes her out of it because she’s such a big fan of the show and there’s a lot of characters. I think we’re all a bit like that because you watch yourself very critically. Have you noticed a difference between the last couple of seasons and previous seasons now the show has overtaken the source material?

I’ve certainly not sensed any difference from the books because I haven’t read them! There’s definitely a difference in the new season because, obviously without giving anything away, where you left season six the Night King is the big threat, there’s a hundred thousand of the undead, we have no weapons to kill them and not only that, Jon Snow’s army is in no way capable of taking this army out and not only that, Cersei’s army and Daenerys’ army on their own wouldn’t be capable of winning anyway so this is a major threat to the existence of Westeros. It may be Zombie Land after the Night King has finished so something’s got to be done. I think that was relatively obvious from the end of season six.

It doesn’t take a genius to realise what has to be done.

Extraordinarily quiet, I think it’s the quietest set I’ve worked on, which doesn’t sound very dramatic but it means that if you’ve got a lot of noise and banging and shouting and that, generally speaking it means a set is not running well.

We don’t have lunch, we run around with polystyrene boxes eating lunch and getting on with it. We get the hour at the end of the day so we finish a little earlier but just to keep things rolling and to keep the momentum of shooting going we film straight through, we don’t stop.

How did it feel to move around between locations and join different groups of characters?

It’s very, very weird when I spent several seasons at Dragonstone, then when Stannis sends me to Castle Black, it feels like I’m invading another show, to show up on this set that I’d never seen for four years, which is in a quarry outside Belfast. That was very strange.

Which particular scenes do you have the fondest memories of filming?

The most recent one, Battle of the Bastards was an extraordinary thing to be involved with. I remember the first day when we were there and sitting in the tent and we knew we had twenty-four days we were going to be on horses and jumping around and running and seven hundred extras and seventy horses and I remember looking at Kit and saying ‘there’s one thing we’re going to need on the next month of this’ and he said ‘what’s that?’ and I said ‘a fucking sense of humour’. There was drudgery involved, but we knew going in. We sat down and had the chats and said this is going to be a pain in the arse. There were no surprises but we knew it was going to be a marathon. It was worth it though. Did you worry whether or not Davos would die in the Battle of the Bastards? Is there a competitive urge to see it right through to the end?

It’s nothing to do with competition, it’s because I’m loving the show so much. If the gods of George R.R. Martin, David Benioff and Dan Weiss wake up in bad humour and decide one morning ‘let’s kill him’ I’ll be gone.

But there’s not an actor on the show that doesn’t want to be in the last episode. I only came in at the beginning of season two so if I was there from the first episode, it would be lovely, it’s closing the circle, being part of the story for the whole thing. That would be a lovely thing, the reason being because the quality of the show is so good, the writing is so good and people are going to be rediscovering the show in ten, twenty years’ time. It’s a benchmark in television.

Did you have to lie about Kit Harington’s return as Jon Snow after the season five finale?

Yeah, I had to do a little bit of lying. Listen, the easiest trick in the world to pull and you get it all the time is ‘what’s going to happen in the new season?’ and eventually when I’m feeling particularly naughty I go ‘okay, I’m going to tell you’ and people go [extreme panic] ‘DON’T!’ [laughter] They want to know but they don’t want to know. It’s funny.

It tore Kit’s soul apart having to keep quiet about it. He said that the worst part of it was when Sophie [Turner] who he met when she was thirteen—she started on the show when she was thirteen—wrote him this beautiful handwritten note saying ‘I’ve learned so much from you, you’re like my brother, you’re so good’, she wrote this heart-felt letter of goodbye to Kit Harington when he’s going ‘I’m fucking coming back next year!’ He couldn’t tell her! He couldn’t tell her! He said that was the worst part of it.

He said in an interview that people were asking him but he couldn’t tell them, then I came up and said ‘Are you coming back?’ and he said no and I said ‘Fuck off!’ Or ‘Go fuck yourself’, because I knew he was coming back, there was no way he wasn’t.

Liam Cunningham, thank you very much!

Game of Thrones Season 7 is available now on Digital Download