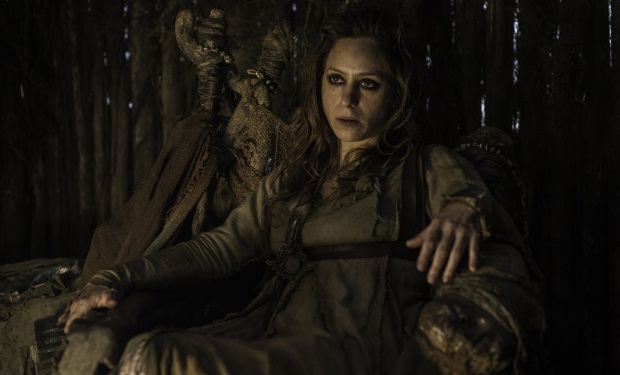 Contains spoilers through to season seven, episode one.

Game Of Thrones has one of the biggest casts on television – twenty-nine people are credited as regulars across season six alone – and doesn’t like to waste a good character, with many of even the most minor characters appearing at least twice. However, every now and again the show produces a one-hit wonder, a character who appears in just one episode of the series but who makes a lasting impression and continues to have an impact on the remaining characters as they move on. So here, we celebrate the best of these single chart-stoppers and the actors who play them.

11. Rila Fukushima as a Red Priestess in Episode 5.3, High Sparrow We’ve seen a few Red Priests and Priestesses over the years, from important characters Melisandre and Thoros of Myr to various named or un-named Red Priestesses who crop up every now and again to remind us that the religion of the Lord of Light is a thing. Rila Fukushima’s nameless Red Priestess in Volantis has one of the briefest appearances, speaking only in Valyrian and appearing for only a couple of minutes. However, her appearance is memorable. On a surface level, her costume and the fact she is played by one of the vanishingly small number of Asian actors on the show suggests that the religion of the Lord of Light might be rather more widespread than hitherto suggested, which is interesting in itself. But more importantly, her performance, detached and enigmatic, casting a lingering glance right at Tyrion as he stands on the edge of the crowd, lingers in the mind of both character and audience.

“You’re not terrifying, you’re boring” young Cersei tells Maggy the Frog when she meets her, disappointed that she doesn’t have cat’s teeth and three eyes. Jodhi May’s Maggy, unlike the Maggy of the books, is not squat and warty, her eyes and jowels are not yellow and green but perfectly normal colours, and she seems to have all her teeth – she is, indeed, rather attractive. However, her subtly unhinged performance and strange physical movements (even within the confines of a chair) ensure that she comes across as just as creepy and softly menacing as she needs to, and we can see that underneath her bluster, young Cersei is genuinely rattled.

9. Ed Sheeran as a Lannister soldier in Episode 7.1, Dragonstone This is a controversial choice, as many viewers found Ed Sheeran’s appearance in the first episode of season seven rather jarring, and felt that it took them out of the show and spoiled their willing suspension of disbelief. Sheeran is far from the first musician to make a cameo appearance on the show, but so far the others have mostly been restricted to musical performance, and Coldplay’s Will Champion (the first) was barely visible. Sheeran’s role is rather more prominent, and while other actors do most of the talking, it extends beyond the song that catches Arya’s attention. Nevertheless, it’s a nice moment. The scene in question, which starts to re-humanize Arya after her training as a Faceless Man and reminds us of the human cost of war on all sides, is a rare light moment in a generally dark show (hands up who else thought it was bound to end with Arya killing everyone?). As such, Sheeran’s pleasant grin throughout the scene and recognisable face add to a sense of warmth and comradeship that is rarely seen on Game Of Thrones.

8. and 7. Finbar Lynch as a farmer and Trixiebell Harrowell as Sally in Episode 4.3, Breaker Of Chains Technically, these characters appear twice, but since they are barely recognisable corpses on their second appearance (in season seven’s Dragonstone), they still qualify for this list. Finbar Lynch’s farmer is clearly far too nice to survive the world of Game Of Thrones, making the same mistake so many random farmers make in films featuring the X-Men’s Wolverine, inviting a random stranger into his home. His gentle demeanour is essential to proving both Arya and the Hound’s points of view concerning him and the world in general – he is a good man and does not deserve to be beaten and robbed (also a violation of guest right, as he himself reminds us), but he is also spectacularly unlikely to survive long in these harsh conditions. Trixiebell Harrowell’s Sally, meanwhile, is silent but does a perfect job of playing a wide-eyed innocent, constant suffering etched onto her face. Both are sufficiently memorable and sympathetic that years later, both Hound and audience are moved by their ultimate, sadly predictable fate.

6. Alexandra Dowling as Roslin Frey in Episode 3.9, The Rains Of Castamere We see her about-to-be-husband Edmure Tully’s reaction to Roslin’s unveiling before we seen Roslin herself, by far the most attractive of Walder Frey’s daughters. But poor Roslin Tully, née Frey, is more than just a pretty face. It’s not confirmed whether Roslin knows what’s going to happen after her bedding ceremony – she’s clearly extremely nervous, uncomfortable and frightened, but that could be true of any young women being forcibly married to a much older man she’s never met, and she seems to relax and looks positively happy once she gets to know Edmure. However, the glances she shoots at Robb Stark during her wedding ceremony imply that she may know a little bit more than she’s letting on. Unlike most characters on this list, Roslin Tully was still very much alive when last heard of, so perhaps one day we’ll find out for sure. In the meantime, her nervy, tense performance at her infamous wedding adds to the uncomfortable tension of Game Of Thrones’ most notoriously upsetting episode.

5. Neil Fingleton as Mag the Mighty in Episode 4.9, The Watchers On The Wall Actor Neil Fingleton has appeared on the show twice, but only once as famous giant Mag the Mighty (since his second appearance is as a giant wight, it’s just possible that the two are meant to be the same character, but surely the Night’s Watch would not have been so foolish as to leave a giant’s dead body unburned, and Jon Snow gave clear orders on that front). Mag the Mighty is not a big talker, but his imposing presence and formidable battle charge is what gives poor, doomed Grenn’s final rousing rendition of his Night’s Watch oath such power.

4. Bronson Webb as Will in Episode 1.1, Winter Is Coming Game Of Thrones is known for its intricate plotting and, especially in the early seasons, for following a complex web of court intrigue and political power struggles. However, as season seven has reminded us all, at its heart is a classic fantasy story about two royal scions fighting off an invasion of ice zombies with dragons. That was clear from the show’s arresting opening sequence, adapted straight from the source novel’s Prologue (Prologues and Epilogues in A Song Of Ice And Fire being known for killing off their point of view character, usually by the end of the chapter). Bronson Webb’s Will has to walk a fine line – he must be sympathetic enough for us to follow him through this bizarre, horror-tinged opening sequence, and yet not so admirable or likeable that we are too angry with Ned Stark for chopping his head off shortly afterwards. He also joins a long list of characters who try to warn the inhabitants of Westeros about the ice zombies, usually without success. It’s a gripping, literally cold open to this epic series. Another victim of a George RR Martin Prologue, and appearing in the opening sequence of season two of Game Of Thrones, Maester Cressen provides our introduction to Stannis Baratheon, Melisandre, Davos the smuggler and Stannis’ home of Dragonstone. Maester Cressen exists primarily to tell us about Davos (a good person, uncomfortable with the Red Priestess but entirely loyal to Stannis) and Melisandre (dangerous, unnerving and apparently immune to poison). However, Cressen is an interesting character in his own right, a man so determined to get rid of someone he believes to be dangerous that he willingly sacrifices his own life in an attempt to kill her, and classically trained actor Oliver Ford Davies brings a wealth of desperation and sincerity to bear on his small part. As more and more regular and recurring characters are killed off, with those that remain still having important roles to play in the final stages of the story, Game Of Thrones has to look to new ways to keep its death toll up and maintain the tension in its many violent encounters. Endangering beloved characters who nevertheless live to fight another day and killing off nameless redshirts will only get you so far. And so we get occasional characters like Karsi, introduced as if they may become important recurring characters, only to be killed by the end of the episode. For such a character to work, the actor has to make an impression in their few pre-death scenes, enough to get us to care about them and to want to see more of them, only to be thwarted. Birgitte Hjort Sørensen does so perfectly, offering a strong, likeable character, which only makes it more upsetting and moving when she is not only brutally killed by creepy zombie children, but rises again as a wight shortly afterwards.

1. Ian McShane as Brother Ray in Episode 6.7, The Broken Man Probably the best remembered of these occasional one-off characters is Ian McShane’s Brother Ray, the man who taught the Hound how to care. In addition to providing one of the more entertaining bits of exposition not involving sex and nudity, as he describes how he found and saved Sandor Clegane, Brother Ray is a hugely likeable and fascinating presence, a fully three-dimesional character fleshed out in just a few scenes. A former soldier, a preacher who despite his position as a Septon of the Seven has no strong attachment to a specific religion, a pacifist with a violent past, a man redeemed by love and kindness – right up to the point he’s brutally murdered – Brother Ray is Game Of Thrones in a nutshell. He is both the reason that the Hound who finds the bodies of Sally and her father is a kinder person, and the reason that Clegane went back to a violent life in the first place, looking for vengeance for Brother Ray and his people. It’s a fine performance by McShane and a heart-breakingly memorable character for the show.