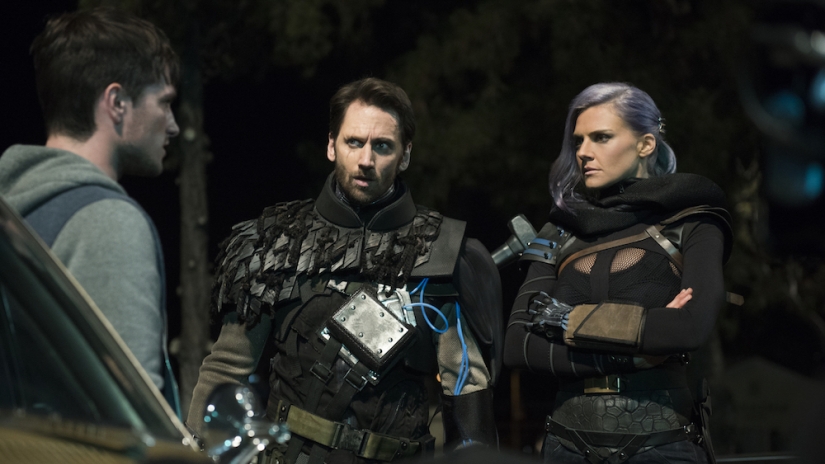 Starting tonight on Syfy UK, Future Man's time travel and its adult humour is a mix that will please fans of sci-fi and comedy alike…

With Future Man, Hulu may just have accomplished what many have tried but few have succeeded in doing: creating the perfect comedy/science-fiction hybrid. Some shows undermine their high-minded drama by peppering it with occasional juvenile humour while others place too much emphasis on the jokes and largely ignore their speculative concept. To use crude but in this case accurate imagery, Future Man goes balls-deep with its time travel plot and grabs pop-culture comedy by the throat, bringing the kind of raw energy needed to sustain both a complex sci-fi plot and the expletive-laden but surprisingly sophisticated humour.

The elevated yet crude humour mostly comes from Tiger and Wolf (Eliza Coupe and Derek Wilson), travellers from an apocalyptic future who seek out their so-called Savior by sending a supposedly unwinnable video game back in time to find the one warrior who can beat it. That victor turns out to be Josh Futturman (Josh Hutcherson), a janitor whose video game skills don’t translate into real life the way the future soldiers had hoped. The harsh future Tiger and Wolf come from makes them fish out of water in our time, and their complete disregard for human life or culture allows them to be over-the-top in a way that’s understandable rather than ridiculous while still producing hilarious results.

The soldiers are in fact exaggerations of the Kyle Reese character from The Terminator whereas Josh is a self-referential Marty McFly from Back To The Future who’s originally seen as Alex Rogan from The Last Starfighter. Amazingly enough, Future Man not only embraces these inspirations; it mentions them outright several times, and it somehow works! Josh uses his knowledge of pop culture to lecture Tiger and Wolf more than once about “time travel 101” to avoid time loops, alternate timelines, and paradoxes. He even has a conversation with another character about how hard it must have been for Marty to fake his way through his changed life, and there’s a scene that is purposefully identical to the moment when Marty’s guitar riffs inspire Chuck Barry via telephone.

The story of Future Man begins at a very base level: a cure for herpes. But having the cure lead to a future dominated by virus-free, superhuman Biotics who seek to wipe out inferior normal humans takes it to another level, and Josh and his new companions must hop through time to prevent those who would unwittingly bring about the apocalypse. Obviously, plans go awry, at times due to the soldiers’ careless violence and sometimes because Josh changes history by mistake or has a crisis of morals about killing innocent people. These dilemmas make for nuanced conflict even as the clash of ideals produce hilarious results.

The actions throughout the season follow a logical path; when one thing doesn’t work, they try another. Along the way, Tiger and Wolf learn more about life in our time, and Josh is enlightened by some harsh realities about his sheltered life as well. There’s a particularly wonderful revelation about Wolf that comes to light halfway through the season that’s transformative for the brutish character, and viewers can’t help but get attached to these characters in moments like this as a result of their evolution.

The scientists at the lab where Josh works, played by Keith David and a spectacularly-bearded Haley Joel Osment, undergo changes of a different type. Dr. Kronish and Dr. Camillo bring a humorously frank and uninhibited discussion to the search for a herpes cure, and as changes are made to history, the effects on these two characters are particularly fun to watch. They obliviously participate in Josh’s makeshift plans, but their single-mindedness of purpose in helping humanity (or profiting from a cure) makes it believable that they would ignore the interference of a janitor.

It’s just amazing how this show can one minute be joking about killing babies and in the next turn be adding another layer to the puzzle the time travellers must solve without missing a beat. In one instance, certain discoveries that are made about the Biotics change everything about how Josh views the problem, but the soldiers realise they need him despite his softness because the more killing they do, the more enemies they make. In fact, one particular police detective played by Robert Craighead pursues them specifically because of changes that were made to history.

Are all of the episodes perfect? No, of course not. In fact, viewers should resolve to watch at least three episodes before passing judgment since it does take a while for the character depth to reveal itself, and some of the jokes in the pilot are a bit strained. By the halfway mark, you’ll have seen the effect that Josh’s parents played by Ed Begley Jr. and the late Glenne Headly have on Tiger and Wolf, and that alone makes it worth the journey.

The fact that Future Man is successful with its delicately balanced mix of true sci-fi and edgy comedy is a credit to the tight writing of Ariel Shaffir and Kyle Hunter (Sausage Party) along with the veteran skills of showrunner Ben Karlin (Modern Family) and the sensibilities of director/producers Seth Rogen and Evan Goldberg (Preacher). Fans of time travel will not be disappointed with the twists and turns of causality, and those that enjoy a good adult comedy will also find plenty to enjoy.