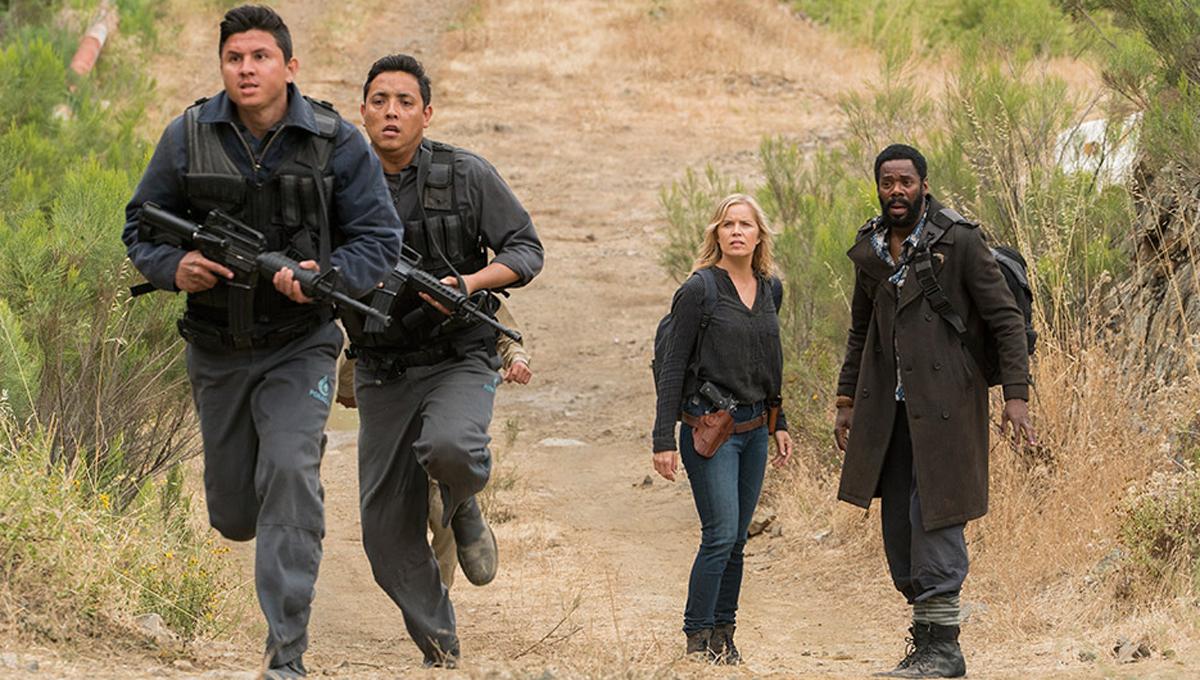 Fear The Walking Dead isn’t a universe that allows happy endings.  Sure, you might get a few happy moments here and there, and between seasons anything is possible, but on a macro level, nothing’s going to work out for anyone, and everyone’s going to die miserably.  After all, these are a bunch of people who are trying to scratch out a living in an inhospitable desert, an arduous process even before the whole zombie apocalypse outbreak.  However, La Serpiente ends on a strangely pleasant note. Daniel and Strand have a handshake and an understanding of mutual benefit. Madison’s gotten the water needed to keep the peace and keep the ranch alive. Walker sees that his new American friends might not be so useless after all. And yet… trouble, as always, brews.

I really like the character of Strand.  He’s been one of the better people since the show started; he’s not particularly tough or strong, nor is he an El Salvadorean Liam Neeson like Salazar, but the soft skills Strand has have allowed him to survive, if not thrive, in the world after. He knows how to make deals, he knows how to read people, and he knows who he can work on and who he can’t work on. Strand is a confidence man, but if you can see through the act, there’s nothing there.

That’s why the friction between Daniel and Strand makes so much sense. Daniel is the polar opposite of Victor. He’s older, wiser, he’s been through hell long before the world turned to hell, and the one thing Daniel typically can be counted on to do is keep his word. Strand can’t be counted on to do anything but what’s best for Victor Strand, and all it took was that one little lie—Victor saying he knows where Ofelia is when he knows that Ofelia isn’t at the hotel—to sour Daniel on Strand permanently.

The scenes that Ruben Blades and Colman Domingo share throughout the episode crackle, because there are two men who are actively trying to out-scheme one another, and it comes through in every little glance. Even the way they stand at the end of the episode, after shaking hands, shows that there’s still something there. Daniel won’t trust Victor, and Victor’s clearly going to figure out a way to manoeuvre around Daniel when the time comes. You can see the mental gymnastics on Strand’s face, and the mistrust on Salazar even before he says he’ll be keeping an eye on Strand.

I think that the writers, Mark Richard and Lauren Signorino, lay it on a little heavy by having Salazar remind Strand that he’ll be watching, but otherwise, it’s a good scene. I like that Strand’s ethical code, at this point, is limited to mostly keeping Lola safe despite her charitable instincts. Strand’s softened his code as well. He’s still looking to survive, but he’s also willing to tell others to do what they need to in order to survive, too. Specifically, telling Madison to take the deal at the dam or be prepared to leave the compound when Walker seems determined to ethnically cleanse the white population off of the land.

Those performances are solid, and the episode itself is fairly solid too. The story is focused around a central setting, the dam, and it works well because there’s not a lot of attention paid elsewhere. There aren’t any cutaways to Ofelia or Troy or anyone else; we’re on the dam and we stay there for the episode. That’s a rare bit of positive focus, and a good idea for the show going forward. Splitting story lines can be very effective if done right, but Fear doesn’t typically do it well if it goes past a standard A/B plot layout.

Still, the performances are solid, with the dam crew showing a little bit more promise than I first expected. The moments of gore, specifically the clogged-pipe walker Madison has to dismember, is done with (for this show) restraint by director Josef Wladyka. We see the head and the severed arm, but it could be gorier. The heavy lifting is done by the sound design team, who step into a lot of mud pits to make gross squishing sounds this week. It’s a good example of showing just enough to imply more horrible things.

That’s a credit to the show. They’re good at implying horrible things. Walker and his tribe, the survivalists… no one’s morally right or wrong. The survivalists have racist attitudes, the Ottos have committed murder, and yet Walker’s people are no better; they’re also racists who have committed murder, and who are trying to drive a family off land they purchased legally. There’s not a big-bad (so far) because everyone’s kind of bad. Even Madison isn’t blameless. That’s a unique bit of moral grey that isn’t all that common in the Walking Dead TV universe.

Read Ron’s review of the previous episode, The Diviner, here.

US Correspondent Ron Hogan might be among those that consider Fear the Walking Dead the more television friendly, adult source material. It’s still not particularly well-written, but at least it’s a TV show and not a live-action comic book tied down to mullets and big mustaches. Find more by Ron daily at PopFi.