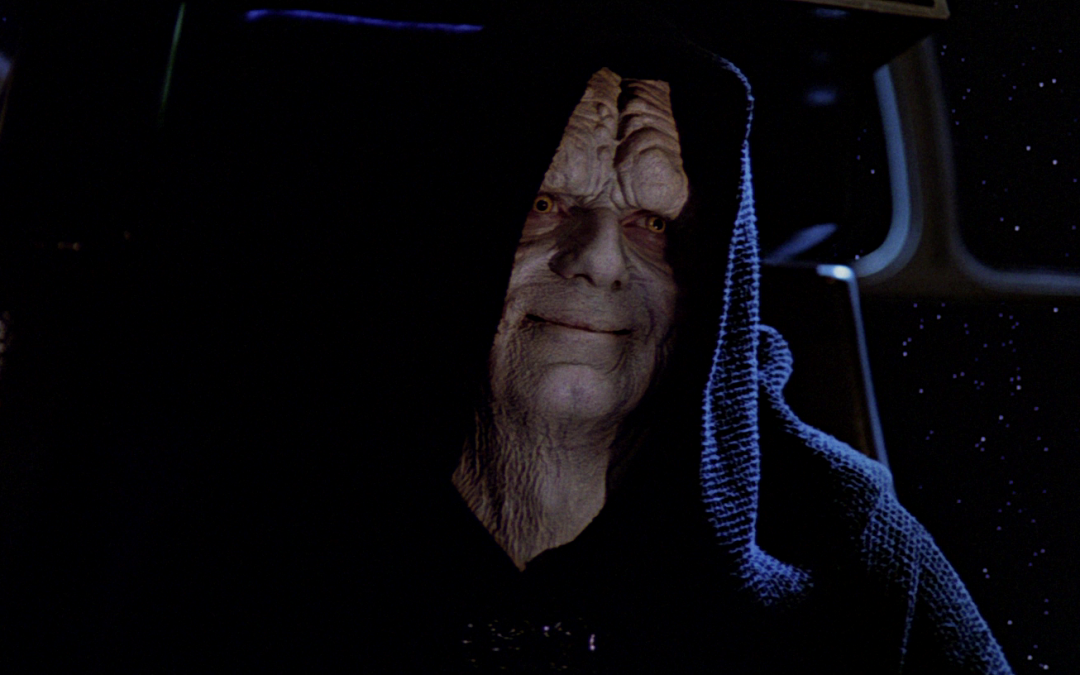 He’s the most evil man in the galaxy and the most fun. Ryan celebrates Emperor Palpatine and the actor who gave him life, Ian McDiarmid.

John Williams’ soaring music does much to mask the reality that, for much of the Star Wars saga’s extensive cast of characters, life is suffering.

Luke Skywalker’s jaunt beyond the horizons of his Tatooine homestead results in knotty familial problems and a severed hand. Princess Leia has to deal with psychological fall-out of her home planet’s destruction at the hands of Grand Moff Tarkin and the trauma of inadvertently snogging her own brother. Even Han Solo, so chipper in A New Hope, winds up frozen in carbonite and thrust in the boot of Boba Fett’s ship by the end of The Empire Strikes Back.

Nor do the villains have all the fun; Darth Vader’s cool demeanour masks the shattered remains of a once noble warrior on life support. Grand Moff Tarkin went up in smoke with the Death Star, and Jabba The Hut had little more to do than sit on his throne all day, get high and listen to some increasingly shrill live entertainment.

Contrast these sorry stories with Emperor Palpatine, a hooded, cackling figure who served as the original trilogy’s shadowy puppet master until he was properly wheeled out for Return Of The Jedi. Palpatine knows he’s evil, and what’s more, positively enjoys his role as the most despicable man in the entire galaxy. In short, Palpatine’s the only character in the Star Wars saga who actually has any fun. And now it looks like he’ll be back for Star Wars: Episode IX The Rise Of Skywalker and we couldn’t be more delighted.

The prequel trilogy, starting with 1999’s The Phantom Menace, paints in Palpatine’s backstory – that of a seemingly benign politician who uses a galactic trade dispute as an opportunity to make a clawing bid for power. Little does the Jedi order know that Palpatine and the evil Darth Sideous are one and the same. Similarly, when a young Obi Wan Kenobi despatches a Sith phantom named Darth Maul, he doesn’t realise that he’s unwittingly cleared the way for Palpatine to one day seek out a new apprentice – the increasingly petulent Anakin Skywalker. 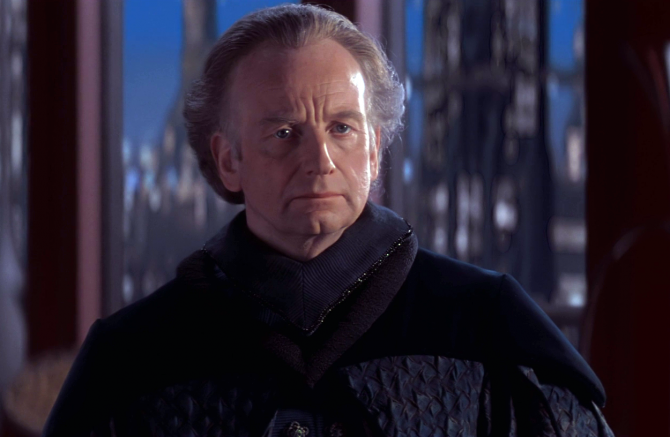 In a trilogy where every event carries the burden of inevitability, the prequels’ most reliable source of entertainment came from Palpatine. It’s fun to watch Palpatine manipulate and cajole everyone from Queen Amidala to Anakin to the entire Jedi Council into doing his bidding. That nobody seems to notice how sinister and lizard-eyed Palpatine is only adds to his hypnotic watchability; Palpatine may have a long list of shortcomings as a human being (if he even qualifies as a human being) but stupidity isn’t among the items. Here, McDiarmid imagines Palpatine as a cross between a calculating bureaucrat and a coiled rattlesnake.

Take the scene in Revenge Of The Sith, where Palpatine casually throws into a conversation with Anakin the story of one Darth Plagueis – a Sith lord who managed to become “so powerful and so wise he could use the Force to influence the midi-chlorians to create life” – that is, until his apprentice, Darth Sidious, murdered Plagueis in his sleep.

Now, this could have been the moment where Anakin finally joins the dots, where he gasps in horror at the realisation of Palpatine’s evil – or, at the very least, take the chance to turn to his mentor and say, “About this Darth Sidious. You and he aren’t the same guy, are you?”

Instead, Anakin just sort of knits his eyebrows in that Hayden Christensen way. 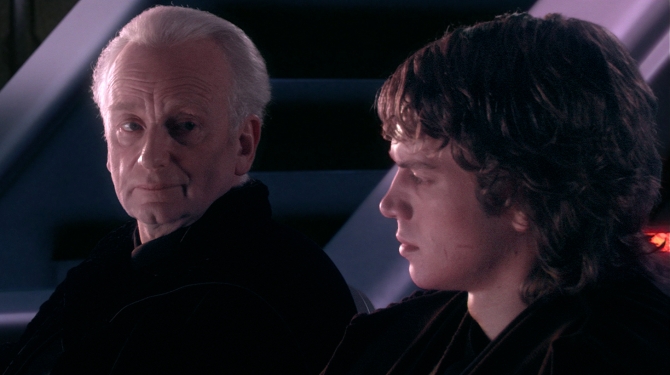 Full credit to Scottish actor Ian McDiarmid, who brings so much passion, power and humour to this spectre of a man. In The Empire Strikes Back, Palpatine was little more than a shimmering hologram played by the British actor, Clive Revill. In Return Of The Jedi, McDiarmid finally came hobbling out of his private shuttle, scheming and threatening his way across the deck of an Imperial Star Destroyer.

From this scene onwards, Palpatine promptly whisked the film from beneath everyone’s noses. Look again at the scenes where he tries to seduce, threaten and bully Luke Skywalker to joining the Dark Side. Imagine how dull these scenes would be without McDiarmid hungrily wrapping his lips around every word. Listen to the way he spits out lines like “Witness the power of this fully armed and operational battle station!” and “Strike me down with all of your hatred!” and imagine any other actor uttering them with such unforgettable ferocity.

The prequels, as flaccid as they were, at least gave McDiarmid the chance to play Palpatine without the mountain of latex fright makeup he had to wear in Return Of The Jedi. It’s nothing short of a delight to see him roaming places like the Theed Royal Palace, quietly moving the pieces around in a game of thrones his rivals are too daft to even realise they’re playing. Indeed, it could even be argued that the Star Wars prequels are less about Anakin’s blank-eyed drift to the Dark Side and more about Palpatine’s ascent to the role of the galaxy’s most powerful fascist overlord. 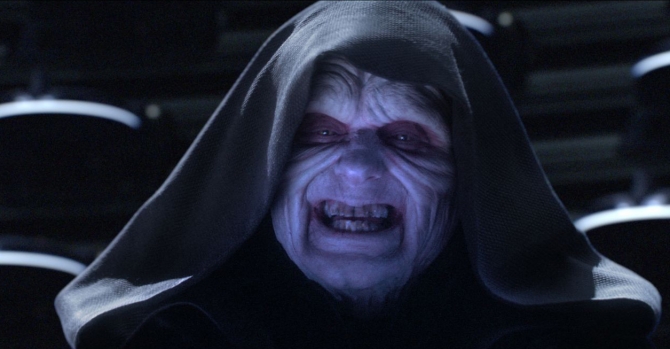 And make no mistake, George Lucas had fascism very much in mind when he conceived Palpatine way back in the days of the Original Trilogy. As McDiarmid took his seat in his swiveling throne on the set of Return Of The Jedi, Lucas reportedly asked of the actor, “Does this remind you of the Oval Office?”

It was that point, McDiarmid later told the Guardian, that he realised who Palpatine was based on: none other than Richard Nixon.

“George knew that eight-year-olds, for whom these films are primarily intended, are very impressionable, and he wanted to make the right impression,” the actor continued. “So the whole film is about the unnecessary rise of fascism. In other words: watch out, they’re all after your freedom, particularly when they’re talking about defending freedom. Without getting over-extended about it, that is at the heart of these movies.”

It’s almost scary to think that McDiarmid almost never got the Palpatine role at all. Until the eve of Return Of The Jedi’s shoot, another, much older actor had the part, but he couldn’t wear the distinctive, uncomfortable-looking contact lenses it required. As a result, a car was hurriedly despatched to whisk the 30-something McDiarmid off for an audition – and McDiarmid, it seems, won the role by a nose.

“As I was leaving and just going out the door, George said, ‘Oh by the way, great nose,'” McDiarmid told USA Today. “I thought that was an unusual thing to say, but then I thought maybe that’s a good sign. Maybe they need a great nose. You can work out why he said that because that was about the only part of my face that was actually left. And of course it peeked out rather nicely from below that black hood. Presumably, they were going to give you a prosthetic one if it hadn’t but they got it for free.” 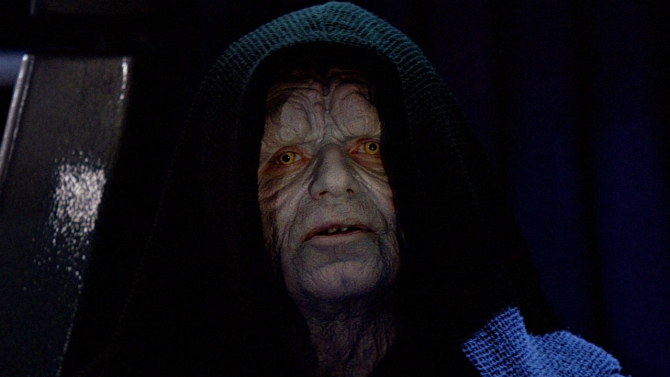 From that moment on, Return Of The Jedi had its Palpatine. Hooded, cackling, lightning spouting from his fingers: to a generation of impressionable kids, the character made an indelible impression. If Darth Vader was a corrupted father figure, Palpatine was the loathsome, maniacal grandparent. (Full disclosure: as a child, your humble writer spent several days roaming the house in a dressing gown, pretending to be Emperor Palpatine. “Look at this pitiful bowl of cereal!”)

While the Emperor made his dramatic exit from Star Wars cinematic lore at the end of Return Of The Jedi, dumped unceremoniously down a reactor shaft by a repentant Vader, the character’s presence has lingered on like a Sith ghost. He’s made appearances in Extended Universe Books, The Clone Wars and Rebels TV shows, as well as numerous other comics and games.

It’s surely telling that, of the handful of classic characters EA could has chosen to revive for its 2015 shooting game Star Wars: Battlefront, Palpatine’s among them. Joining Luke Skywalker, Han Solo, Princess Leia, Boba Fett and his old apprentice Darth Vader, Palpatine’s one of the six classic characters players are able to briefly control in the game. Able to project lightning from his fingers and move with uncanny speed, Palpatine once again livens up the Star Wars universe with his Sith necromancy and wicked, rictus grin.

Palpatine’s presence in Battlefront is an example of how quietly – you might say insidiously – the character’s sneaked into our affections. Boba Fett may be an oft-cited fan favourite, but the hooded Emperor is surely close behind. Indeed, the Disney era of revived Star Wars movies, beginning in 2015 with The Force Awakens, was what first led to some speculation as to whether Palpatine might make some kind of dramatic return. 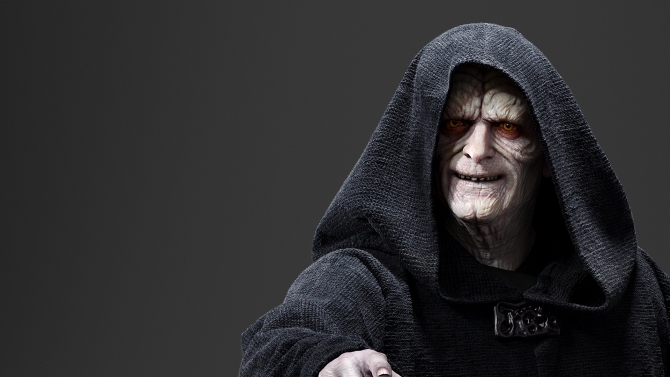 During the Star Wars Celebration at Anaheim in 2015 year, McDiarmid fueled the flames when he suggested that Palpatine, before his death in Return Of The Jedi, could have “cloned himself in time to be in the next movie…”

The crowd, quite understandably, went into an absolute frenzy, forcing the actor to make a hurried retraction.

“But he didn’t!” McDiarmid said above the rising clamour. “But he didn’t, unfortunately. No. Listen, ladies and gentlemen. I’m dead. I’ve been dead for the last thirty years. I can conform that – George was quite categorical.”

It seemed that 2016’s Rogue One, which takes place just before A New Hope, would have been a good opportunity to reintroduce the Emperor, if only for a brief cameo, but that did not come to pass. But it looks like he’ll darken our screens again. Based on the first trailer for Star Wars: The Rise Of Skywalker, he will make an appearance once more for Episode IX to conclude the saga.