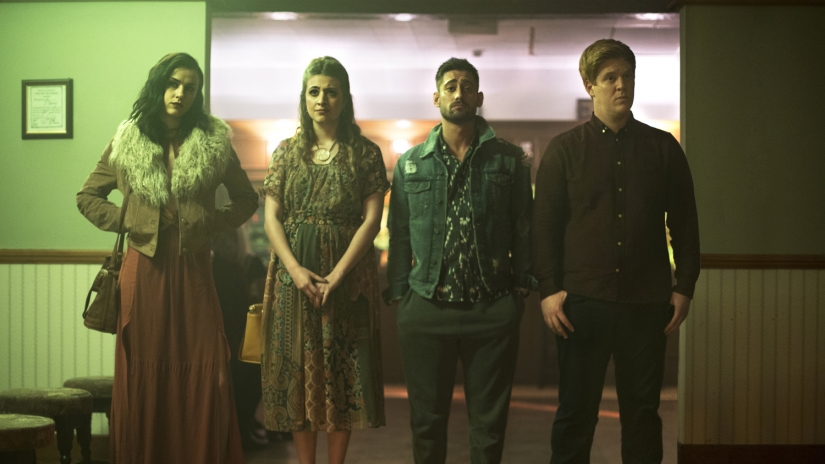 A British horror comedy penned by Danny Morgan, we take a look at Double Date…

British horror comedy is a broad church, and when it comes to the cinema, you could end up with anything from Shaun Of The Dead to Lesbian Vampire Killers. Happily, Double Date, a blokey thriller written by its star Danny Morgan (BBC Three’s Ideal) is quite funny and has a certain amount of visual panache, so it lands comfortably in the better end of the spectrum.

Arriving in UK cinemas fresh off a crowd-pleasing premiere at FrightFest earlier this year, the film follows Jim (Morgan), a painfully shy young man who’s on the verge of becoming a 30 year old virgin. His best mate Alex (Michael Socha) seems even more exasperated about this than he does. And so, neither of them can believe their luck when stunning sisters Kitty (Kelly Wenham) and Lulu (Georgia Groome) agree to go on a double date with them. But unbeknownst to them, the killer siblings have much grimmer plans for the evening.

It’s a straightforward premise, but Double Date is a film that’s elevated by sheer gusto. Making his feature debut, director Benjamin Barfoot really gives it some welly, punching well above its lo-fi standing and injecting some real style into the proceedings. Barfoot’s aspirations are clearly set out in the violent cold open, ironically set to Yazoo’s Only You, and the striking animated title sequence that follows, and they are largely met over the following 90 minutes.

The script mostly zigs and zags exactly where you expect it to, but implausibly, the jokes are strong enough to enliven some really stale setups. Most notably, a detour to meet Jim’s devoutly Christian family for a birthday party, after some accidental drug-taking no less, sounds like an obvious cringe comedy bonanza. But when that scene arrives, Rosie Cavaliero and Robert Glenister are genuinely hilarious in their cameos as Mum and Dad, with big laughs coming from their characters rather than the situation.

Unfortunately, the circumstances of that accidental drug-taking is still the film’s biggest misstep. Upon discovering that their dates don’t drink, Alex spikes their cranberry juice with some hastily obtained pills, a decision that means the usually likeable Socha has to work ten times as hard for us to care what happens to him any more.

The film tries to make him more sympathetic by introducing his dad (Dexter Fletcher, taking the ‘And’ for his cameo appearance) in a detour that winds up being the only fat on the film. But still, Socha just about gets there on his own, and it’s mostly down to his uncanny ability to land a well timed “fuckin’ hell” and through his relationship to Morgan’s self-effacing turn.

The lads’ dynamic is amusingly mirrored in the sisters too, with kickboxer Kitty repeatedly scolding shrinking violet Kitty for being a “silly sausage” as she voices her doubts about their sacrilegious scheme. Groome is funny, but it’s Wenham who gives a star-making performance as the sociopathic elder sister, with a particular set of skills, and equally lethal comic timing.

There are plotholes galore, but they largely disappear when things get really boisterous in the third act. The main talking point will be when things get physical in an unexpected way during that climactic setpiece, with a really well directed fight between two characters. The brutal knock-down brawl is the height of the film’s gory craft, even if it’s let down shortly afterwards by a standout bit of shonky prosthetics work.

From its opening titles to its bone-crunching finale, Double Date aims much higher than the type of laddish horror film it resembles at first glance. It’s not spot on, but it has enough surprises to leave an impression, and boasts one of the year’s most spectacular fight scenes. It will be a shame if it doesn’t find the big crowds to which it’s so obviously pitched, but it should stand up to home viewings with pals too.