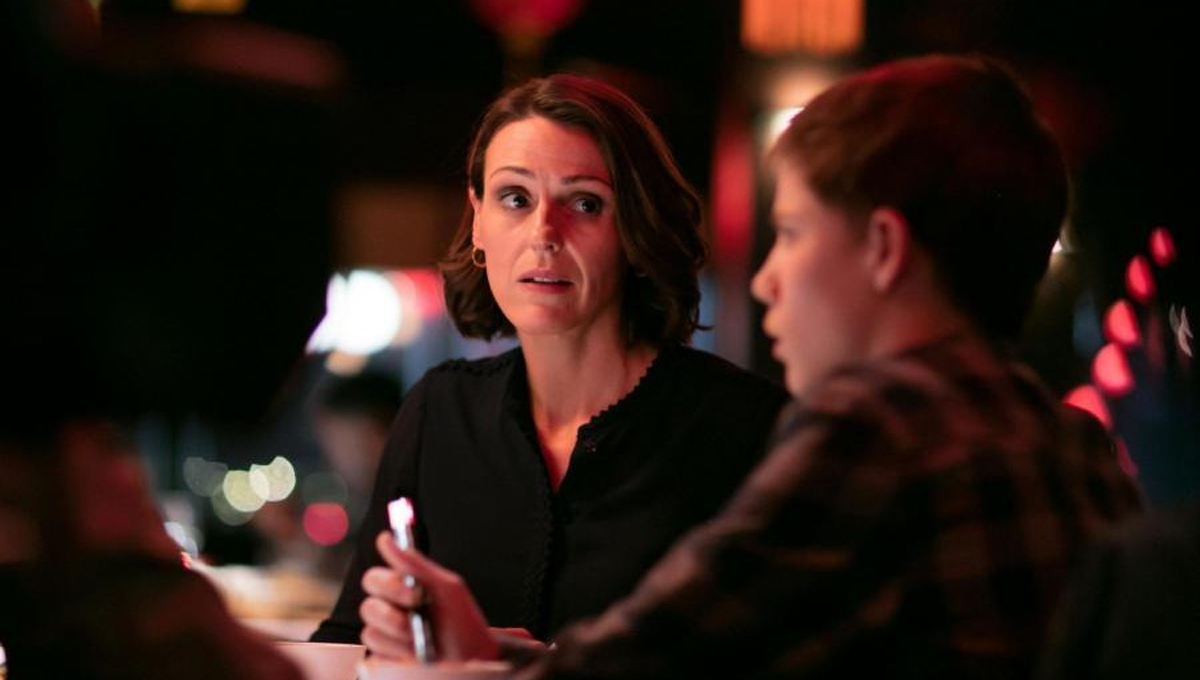 Spoilers ahead in our review of the Doctor Foster series 2 finale, which boasts excellent performances…

Run, Tom! Go! Get as far away from Parminster and from those two as you can. We’ll help in fact – Doctor Foster’s millions of viewers will form a network of safe harbours. You’ll find bundles of cereal bars, five pound notes and Jason Bourne-style fake IDs stashed behind loose bricks and taped to the underside of toilet cistern lids around the UK. Think of it as an underground railroad for mistreated TV characters. Perhaps you’ll find your way to new, more sympathetic parents – there’s a nice couple over on Game Of Thrones. The Lannisters. Look them up.

Only if the series two finale was a holodeck program designed specifically to traumatise poor Tom could a better job have been done of it. Through the hour, we watched his face grow paler, his eyes grow larger and his sense of rootedness shake entirely loose, all told with enormous talent by actor Tom Taylor. Again and again, Tom’s mum lied to him and his dad cried at him. Lying, crying, almost dying… It was a nursery rhyme of psychological torment for the boy. Him running away at the end was a mercy. The alternative would have been for him to have taken the point of those scissors to his parents’ temples and pressed hard. No court in the land, etc. etc.

Gemma and Simon had to survive, of course. There couldn’t be a series three without them. Presumably, that’s what this finale’s ‘pivot’ was all about. Following the Broadchurch model, this show is too successful to let it end now. By sweeping the prize fight to one side and fudging the ending to make it seem as though Gemma and Simon’s son was always the focus rather than just the cannon fodder of this story, the door has been left open for another run. Doctor Foster III: The Search For Tom.

The ruinous effect of the leads’ actions on their child is a sober and responsible point on which to end series two, if not an especially satisfying one. It’s like someone turning the lights on mid-orgy to say there’s a DPD delivery at the door. There we all were, enjoying a bit of nasty fun, and now the real world’s gone and ruined it.

The same can be said for Bertie Carvel’s depiction of Simon’s utter degradation at the breakfast table. Before our eyes, he melted from smug, bitter villain to a blubbering mass with all the wobbly vulnerability of his poached eggs. If you were among those who cheered Simon’s defeat last week, that’s when you may have started to feel a bit sheepish. (Luckily for me, being at all times the very model of equanimity and kindness, I’d done no such thing.)

Carvel was on excellent form as a man at his wits’ end. Simon’s winded reaction to Tom’s savvy summing up of his life as “a massive failure” felt so real that I couldn’t even enjoy it. Annoyingly, Carvel kept cleverly evoking such depths of pain for his character that there wasn’t any joy to be had. After a series of outrageous sex and operatic scheming, it all came down to earth with a bump. Divorce, adultery, game-playing… it injures people, children especially. Talk about a buzzkill.

That’s not to say the finale was without outlandish plot moves or shock tactics. Simon almost killed himself twice and we were led to believe Tom was in mortal peril at least as many times. Gemma didn’t run Simon over in her sensible car, but she did—someone alert the GMC—lay him out a suicide picnic on a Travelodge side table. (Like additional vanity kits, can’t you just ring down to reception for one?)

It was an episode full of Doctor Foster specials. Gemma made unfathomade decisions, there was a mysterious hand-delivered package, the return of the scissors, a series of flashbacks to happier but deceitful times, and a prominent nursery song in the repeated appearances of Row, Row, Row Your Boat. (Not an indication that, as they lyrics say, all this was but a dream, but the playing-in-the-background clue for Gemma to track Tom down to the hotel after Simon answered his phone.) You could call it a greatest hits.

Series two’s last remaining mystery was also solved. No, not what heavy object was dropped on James’ head to make him keep showing up at Gemma’s door, but what Simon told Tom that made him move out. A secret from Gemma’s experience of post-natal depression, it was a betrayal almost worse than two years of sleeping with a twenty-year-old behind her back.

After everything that’s happened, is, as Simon, Gemma and Tom all independently expressed a wish for this week, a fresh start for the Fosters possible? In a potential third series, could Gemma take Simon back? She said she’d never forgive him, but then five weeks ago, she said she’d rather slit her throat than have sex with him and we all saw how that ended up.

They’re children, Simon and Gemma. They don’t know what they want. And in the end, Tom acted as their parent doling out first support and then punishment. He told his dad things would be okay and told his mum he loved her, then walked away. Sensible lad.

Should a third series arrive, would it be sensible for us to do the same? I wouldn’t say so. Whatever its wobbles or inconsistencies, Doctor Foster is a melodrama balanced on performances that are too good to miss.