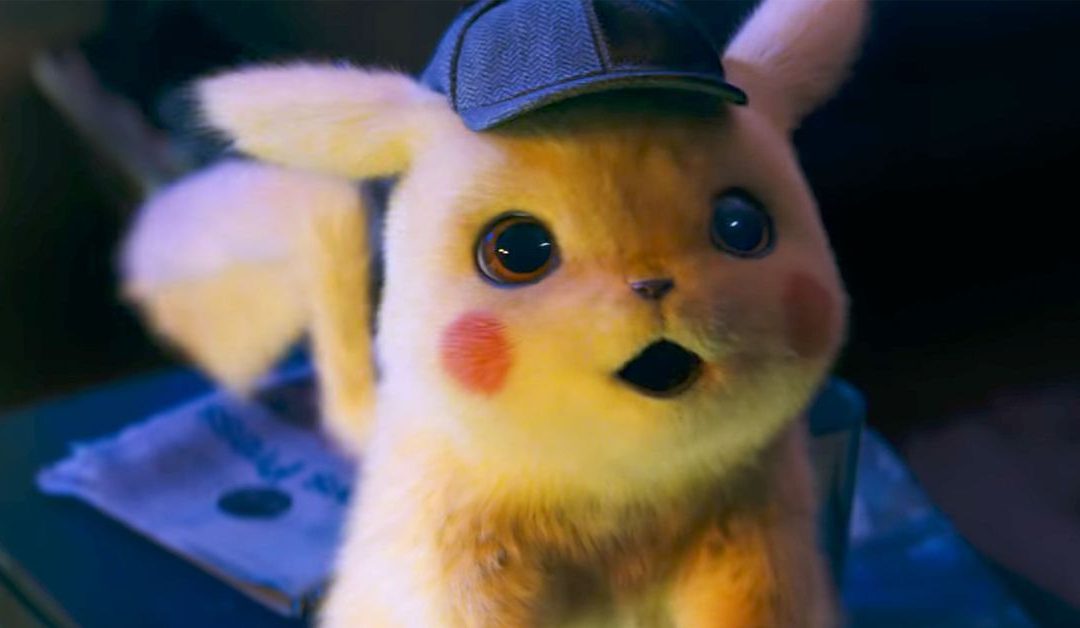 Our US friends spot some of the cleverest references you might have missed.

This Detective Pikachu article contains spoilers. You can read our review of the film here.

Yes, Detective Pikachu is a solid standalone movie, but it best serves as a tribute to the wonderful world of Pokémon as well as the fans who helped turn a little Game Boy game into a phenomenon the likes of which nobody had ever quite seen before. Detective Pikachu is a visual feast that will overwhelm even the most hardcore of Pokémon fans as they try to identify every reference, callback, and Easter egg.

That brings us to the matter at hand. See, Detective Pikachu was essentially made to be the largest, most expensive, and often the most impressive Pokémon Easter egg that you could possibly imagine. Since it’s going to take quite a bit of time to catch ’em all, our initial Easter egg list consists mostly of some of the movie’s most clever references as well as the things that you may have truly missed. As always, though, be sure to reach out to us in the comments below after you see the movie so that we can update our list of Easter eggs with the ones we missed.

With that out of the way, let’s play an elaborate game of “Who’s That Pokémon?”

Cubone Cries Over His Dead Mother

Early in the film, we see a Cubone standing in the middle of the field crying. While the exact reason isn’t explained, it’s probably because Cubones wear the skulls of their dead mothers on their heads (seriously). They’ve been known to mourn their mothers by hanging around downtown by themselves and having a good cry. It’s all surprisingly dark, and we can see why the movie doesn’t bother explaining this in-depth.

When Tim walks into his father’s office, there’s a movie playing on the TV that Tim refers to as an old detective movie. It actually sounds like the movie his father was watching is Angels with Filthy Souls, a parody of the movie Angels with Dirty Faces that first appeared in Home Alone. We’re not even going to dive down the rabbit hole that is the shared Home Alone/Pokémon universe.

Jigglypuff Puts a Patron to Sleep at a Diner

During the diner scene, we see a Jigglypuff singing into a microphone at a table where a man is sleeping soundly. Those who aren’t familiar with Pokémon may just assume he’s simply tired, but those who know the franchise (or at least play Smash Bros.) know that Jigglypuff’s singing has the ability to put people to sleep.

Speaking of that diner, an exterior shot reveals that its name is Noctowl. This is clearly a reference to the Gen-2 Pokémon of the same name. It’s quite the appropriate name considering that Noctowl is a nocturnal Pokémon.

There’s no shortage of posters in Detective Pikachu that reference something from the game, but this one is particularly clever. In the diner, we see what looks like an old-school boxing promo poster for a battle between what appears to be a Machamp and a Primeape. Considering that these are two fighting Pokémon, it’s a pretty fitting showdown.

There’s a Berry Juice Neon Sign at the Diner

It turns out that diner is a treasure trove of Easter eggs. When Tim is at the bar, you can see a neon sign in the background for something called Berry Juice. That’s a reference to a drink introduced in Gen-2 that can heal Pokémon.

Various Versions of Pokemon Themes Are Used for Commercials and Muzak

If you can’t help but feel that you’ve heard some of that background music that plays during the film, it’s because most of those songs are variations of Pokémon themes from the game. They’re particularly noticeable during the scene when Tim watches a video on the train and when Howard and Roger Clifford are shooting a commercial.

When Pikachu is rifling through Tim’s childhood room, he starts rapidly turning the pages of a binder sitting on a desk. We get a brief peek inside the binder which reveals that it’s full of Pokémon Trading Cards. It appears that Tim was one of the many who spent much time and money collecting as many cards as possible.

There are quite a few Pokémon-related posters in Tim’s childhood room, but there are two that stand out above the rest. One shows a red and a green Pokémon seemingly facing off while the other features a black and a white Pokémon doing the same. These are almost certainly a reference to Pokémon Red and Green (or Emerald and Ruby) as well as Pokémon Black and White.

When Psyduck is about to lose his mind, Pikachu attempts to calm him down by saying (among other things) “serenity now.” This is a reference to “The Serenity Now” episode of Seinfeld in which George’s father is advised to say “serenity now” whenever he gets angry and feels his blood pressure rising.

The Speakers at the Underground Fight Club Are Actually Loudreds

When Tim and Pikachu wander into the underground Pokémon fight club that doubles as a pretty hopping night club, be sure to check out the speakers in the room. They’re actually a Pokémon named Loudred that uses its ears as loudspeakers.

Throughout Detective Pikachu, we see an unusual number of missing posters for various Pokémon. While the film doesn’t spend much time directly addressing the cause of these posters, it’s probably no coincidence that we see many of the Pokémon featured on these posters hanging around the club.

During that same underground fight club scene, we watch as the Pokémon go crazy after being exposed to the mysterious R gas. During the chaos that follows, we watch as the glass on a Magikarp’s tank is broken and he falls out. In the process, he splashes some water on some nearby Pokémon. This is likely a reference to Magikarp’s infamously weak splash attack.

R Is Likely a Reference to Team Rocket

One of the key plot points in Detective Pikachu involves a substance referred to as R that causes Pokémon to lose their minds. It’s likely that the R is a reference to Team Rocket, an evil faction that has a tendency to brand many things with the same letter.

At one point, we learn that Mewtwo made it to the world of Detective Pikachu after he escaped the Kanto region about 20 years ago. This is almost certainly a reference to the original games which took place in the Kanto region, introduced Mewtwo to the series, and were released a little over 20 years ago.

Howard Clifford’s evil plot involves releasing the dangerous R gas from parade balloons during a celebration. This might be a callback to Tim Burton’s Batman, which features the Joker utilising the exact same tactic. Unfortunately, nobody pulls a comically large revolver out of their pants in this movie.

You’re not really a pop culture icon until you’ve got your own balloon in the Macy’s Thanksgiving Day Parade, and sure enough, Pikachu has his own. It looks like the producers either borrowed that balloon or at least borrowed its design as the balloon in Detective Pikachu is a dead ringer for it.

Snorlax Sleeps in the Street to Block Progress

An early shot of Ryme City reveals a Snorlax sleeping in the middle of a street forcing drivers to move around him. What initially seems like a throwaway joke is actually a pretty clever reference to the many Pokémon games which require players to navigate around a Snorlax that is blocking their progress in some way.

Howard Clifford Has Evolutionary Stones in His Office

Most of Howard Clifford’s office is a treasure trove of references, but there are a couple that especially stand out. The first involves some stones that we see sitting on one of his tables. While no direct reference to them is made, it’s easy to guess that these are evolutionary stones used to evolve certain Pokémon in the games.

Staying in Clifford’s office, be sure to take a closer look at those skeletons behind Howard Clifford’s desk. It certainly seems like they’re fossils of the legendary Pokémon Dialga, Palkia, and Arceus. That’s quite the impressive collection considering that these are some of the oldest Pokémon in existence and that Arceus is believed to be the creator of the Pokémon universe. Of course, it’s always possible they are fakes.

In one of Detective Pikachu’s funniest fanboy moments, we watch as Pikachu wanders along mournfully singing a song. That song is none other than the theme song from the English version of the original Pokémon animated series.

Later in the movie, we see Lucy wearing an outfit that looks surprisingly similar to the classic Pokémon trainer look. Granted, it does appear that she’s modified it slightly to look a little more modern.

Lucy Has a Spoink as a Dashboard Accessory on Her Car

It’s nearly impossible to call out every Pokémon featured in the film, but this appearance is particularly clever. When Lucy gets out of her car during the parade, we can just see what appears to be a Spoink on her dashboard. We’re guessing it’s not actually a live Pokémon, but this bouncing creature’s design would make it the perfect accessory.

Unown’s Alphabet Appears Throughout the Film

It doesn’t seem like any of the incredibly rare Pokémon known as Unowns appear in Detective Pikachu, but they do make their presence felt. These Pokémon, whose shapes form a mysterious alphabet, can be seen on some signs throughout the movie, and one of them even appears on a shirt that Tim wears.

Lucy’s Psyduck Is a Callback to the Pokemon Animated Series

Fans of the Pokémon animated series may experience deja vu after learning that Lucy Stevens has a Psyduck. Maybe that’s because Misty’s most famous Pokemon in the animated series was a Psyduck that usually gave her quite a bit of trouble.

Detective Pikachu is out now in UK cinemas