Dark Universe: the undignified death of a cinematic universe 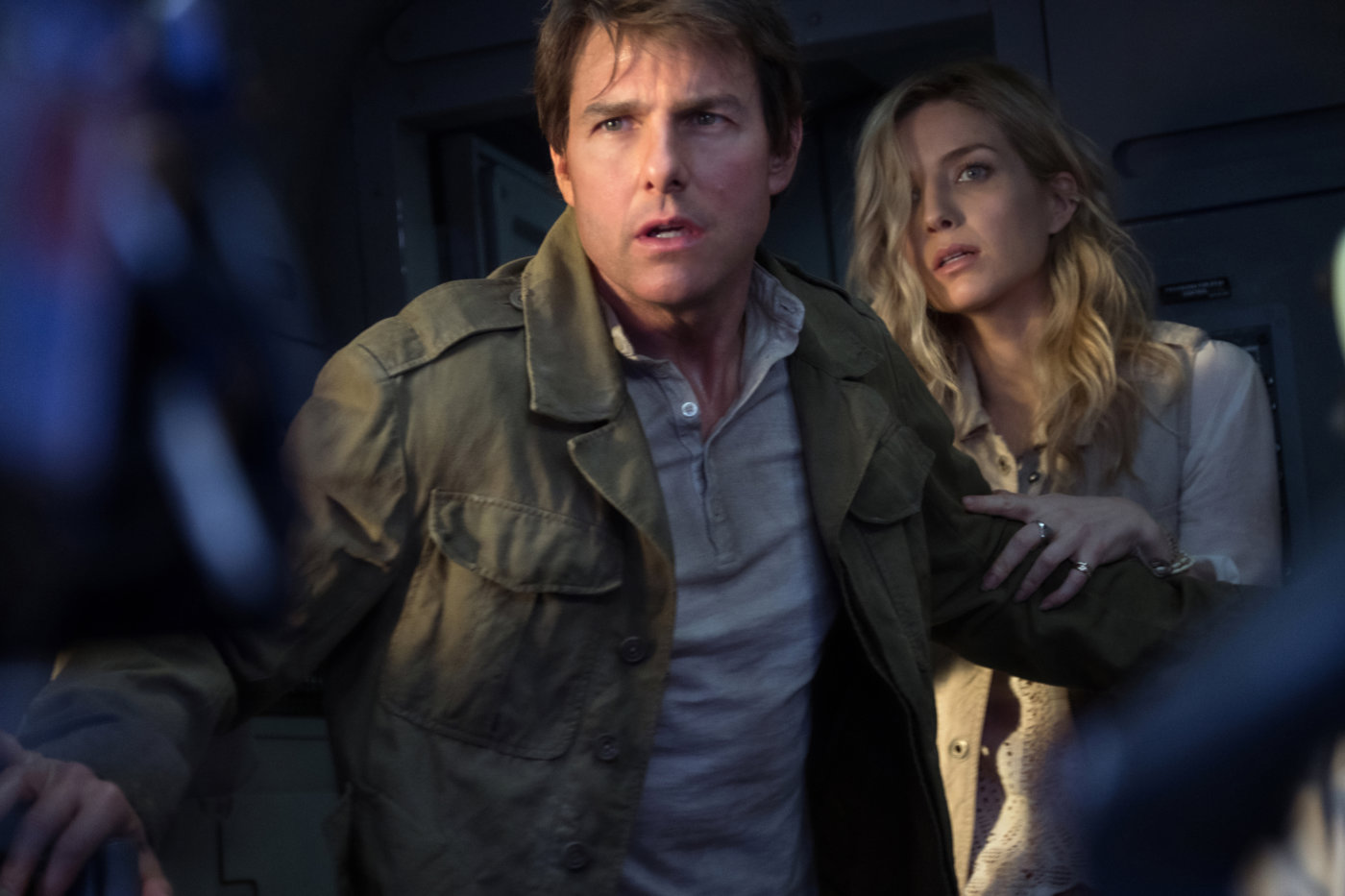 It's fair to say that The Mummy didn't ignite the multi-movie franchise expected of it. We look at the death of the Dark Universe…

NB: The following contains spoilers for 2017’s The Mummy.

For some, The Mummy’s marketing campaign began not with a bang, but a squeaky Tom Cruise scream. In December 2016, an unfinished trailer for the then-forthcoming film appeared online, and soon went viral: lacking music and proper sound effects, the promo’s otherwise dramatic visuals suddenly seemed comically threadbare. A violent plane crash unfolded with only a few chunks of dialogue and an amusing yelp from co-star Annabelle Wallis; Tom Cruise stumbled about in zero-gravity with only a few apologetic ‘oofs’ and ‘eeks’ for company.

Steps were taken to have the leaked trailer removed, but as is the way of the web, the clip soon went viral anyway, as users on Reddit and Tumblr began editing the Tom Cruise Wilhelm Scream, as it became known, into movies like The Phantom Menace and Team America.

We can only imagine the headaches the leak must have caused The Mummy‘s marketing team – particularly when the movie had so much riding on it. This was, after all, Universal’s latest attempt to update its pantheon of classic movie monsters for a new era; Dracula, Frankenstein and The Wolfman were all much-loved films from the 30s and 40s, but previous efforts to bring them into the 21st century had delivered mixed results. Van Helsing, starring Hugh Jackman as the title vampire hunter, failed to capture the same interest as The Mummy reboots, also directed by Stephen Sommers. The Wolfman, directed by Joe Johnston and starring Benicio del Toro, was an outright misfire; Dracula Untold fared better financially but not critically.

With The Mummy, Universal hoped to throw its monsters into the new millennium, with a contemporary plot that mixed horror, action and fantasy, plus an interlinked approach cribbed from the Marvel Cinematic Universe. In a public show of confidence, the studio announced its Dark Universe of movies in May 2017 – about two weeks before The Mummy’s opening. Clad in moody shades of blue and grey, the Hollywood stars brought in to spearhead were shown off in a glossy press photo: Tom Cruise, who would presumably play a recurring role as former army guy turned adventurer Nick Morton. Sofia Boutella as the Mummy. Russell Crowe as Dr Jekyll and his maniacal other self, Mr Hyde. Johnny Depp as the Invisible Man. Javier Bardem as Frankenstein’s monster.

Universal’s schedule, announced at the same time, was even more bold: a new version of the classic Bride Of Frankenstein was slated for Valentine’s Day of 2019, with Angelina Jolie co-starring as the monster’s bride and Bill Condon (who made the superb Gods And Monsters, about Frankenstein filmmaker James Whale) set to direct. Further ahead, there were Wolfman, Dracula, Jekyll & Hyde, Phantom Of The Opera and Creature From The Black Lagoon films in the offing.

Much hinged, naturally enough, on the success of The Mummy. As well as setting the tone for Universal’s planned string of blockbuster films, it would also lay the narrative foundation for all those horrors still to come. The common thread would be an entity called Prodigium: a secret society led by Dr Jekyll which devotes itself to studying and fighting the supernatural. In essence, this made Russell Crowe’s character the equivalent of Marvel’s Nick Fury: a cool, imperious character who pops up in each movie to recruit new members to his cause. Universal might have thought that Tom Cruise would be its universe’s Robert Downey Jr, who brought so much charisma to the hugely successful Iron Man. There are certainly parallels between the self-centred yet brave Nick Morton in The Mummy and Iron Man’s billionaire hero, Tony Stark.

Even as that cast photo emerged in May 2017, however, there was trouble brewing for the nascent Dark Universe. Tom Cruise’s winning smile cost The Mummy a reported $17 million – a not inconsiderable portion of the film’s estimated $125 million budget. On paper, that might have seemed like a small price to pay for a star who could still open movies overseas, yet early tracking suggested that The Mummy would make a fairly meagre $40 million on its opening weekend. At the time, executives appeared to be putting a brave face on that figure – $40 million would, sources told the Hollywood Reporter, be enough to ensure the Dark Universe’s future.

Behind the scenes, the relative inexperience of director Alex Kurtzman, a screenwriter with only one little-seen drama as director to his name, might have been a cause for concern. Rumours would later emerge that Tom Cruise, an actor known for investing himself in just about every aspect of his movies, had made a number of creative decisions on The Mummy, from rewriting the script to give his character more to do, to insisting that the big aerial set-piece from the trailer be shot practically.

The glossy cast photo, a piece of promotion that might have once left rival studios awe-struck at the roster of stars assembled in one franchise, wound up as the butt of sarcastic internet posts when it emerged that the actors were composited together in Photoshop.

If there were hopes that the finished Mummy would wipe away the cynicism, they’d soon be dashed as the film opened on the 9th June. Although Kurtzman’s film wasn’t without spectacle – on a big screen, with all the sound, that aerial set-piece looked impressive enough – its story felt disjointed and awkward. This latter aspect seemed to bear out the rumours of extensive and repeated script rewrites – something hinted at by The Mummy’s credits, which lists David Koepp, Christopher McQuarrie and Dylan Kussman as screenwriters, while Jon Spaihts, Jenny Lumet and Alex Kurtzman get story-by mentions.

The resulting movie sat awkwardly between multiple genres, with its Mission: Impossible-style action undercutting its moments of 12A horror, which in turn awkwardly rub up against Russell Crowe’s spectacularly misjudged performance as Mr Hyde. It was the inclusion of this latter story strand – Crowe’s character and his Prodigium organisation – that partly weighed down on the movie’s pace. What might have been a brisk b-movie writ large, with Tom Cruise facing down a demonic Egyptian force in modern London, was interrupted by repeated scenes intended to set up the wider Dark Universe, as overseen by producers Kurtzman and Chris Morgan.

Critics were less than kind to The Mummy, and audiences didn’t race to see it, either: the film’s debut weekend brought in $31.7 million domestically – almost $10 million lower than projected. Cruise’s loyal following overseas brought better news in other territories, but all told, The Mummy made a shade under $409 million worldwide – a sum that covered its prints and advertising, but did little to suggest there was much life out there in the Dark Universe.

Universal didn’t rush to make any announcements about the franchise in the weeks after The Mummy‘s release, but the impact was clearly felt. In London, Bill Condon and his team of filmmakers were quietly at work on the pre-production for Bride Of Frankenstein; the aim was for shooting to begin in early 2018, ready for its release the following year. In October 2017, however, Universal announced to Deadline that Bride Of Frankenstein had been postponed, with no clear suggestion of when it might re-emerge.

“After thoughtful consideration, Universal Pictures and director Bill Condon have decided to postpone Bride of Frankenstein,” the studio’s statement read. “None of us want to move too quickly to meet a release date when we know this special movie needs more time to come together. Bill is a director whose enormous talent has been proven time and again, and we all look forward to continuing to work on this film together.”

An even greater blow sounded a month later when, on the 8th November, it was announced that Alex Kurtzman and Chris Morgan had left the franchises they’d helped build. While this doesn’t necessarily mean that the Dark Universe is entirely defunct, it’s a clear sign that  Universal is having a careful rethink; according to the Hollywood Reporter, an office on the studio’s backlot, once devoted to developing Dark Universe movies, now stands empty, the monster memorabilia and imagery on its walls long since removed.

“We’ve learned many lessons throughout the creative process on Dark Universe so far,” Universal president of production Peter Cramer recently told the outlet, “and we are viewing these titles as filmmaker-driven vehicles, each with their own distinctive vision. We’re not rushing to meet a release date and will move forward with these films when we feel they are the best versions of themselves.”

One of the most valuable lessons Universal could take away from The Mummy is that not all film series can benefit from being forced into the movie universe framework. With its cinematic universe, Marvel has found a means of turning its already colourful roster of characters into a cohesive group of films that reliably please audiences worldwide. With The Mummy, Universal had to make all kinds of concessions and leaps of logic to turn an existing film into something that it hoped would please everyone – those who loved the horror movies of old and season pass holders who wanted to take their kids to see a PG-13 action film.

If Universal wants inspiration for the future, it doesn’t have to look far beyond its own front gates. Jordan Peele’s Get Out, made for a fraction of The Mummy‘s budget at around $4.5 million, was a critically acclaimed hit that combined horror, comedy and sharp social satire. It was made by Blumhouse, the production which also brought us another low-budget 2017 genre hit – M Night Shyamalan’s Split, and has a steady distribution deal through Universal. If there’s a future for Universal’s classic monster tales, we’d suggest it lies not in the star-heavy, interlinked, multi-million-dollar register of The Mummy, but in the frugal, filmmaker-led style of Blumhouse. (Indeed, there were signs that Universal was thinking along these lines back in the spring, with reports circulating that Jason Blum had expressed interest in tackling some of the entries in the Dark Universe.)

Head to the website Welcome To Prodigium, a website once intended as a hub for all things Dark Universe, and you’ll simply find the same film clip, rolling over and over – the image of a stuttering record needle tidily summing up a franchise locked in a holding pattern of undetermined length. Like other studios before it, from Sony’s ill-fated Spider-Man universe, which stuttered after the release of The Amazing Spider-Man 2, or the Transformers writer’s room, which disbanded after this year’s The Last Knight, The Mummy stands as a reminder of what happens when a property is reworked to fit an unsuitable paradigm. But by taking its films back to their low-fi, horror roots, maybe Universal can breathe new life into its old realm of gods and monsters.