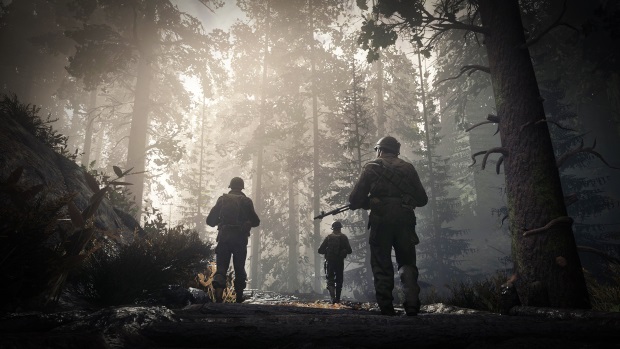 Call Of Duty heads back to its roots and finds form as it does so. Here's our look at Call Of Duty: WWII…

In the interests of full disclosure I should admit that I’m not a huge Call Of Duty fan. Actually, that’s not entirely accurate; it’s more a case of not having been a COD fan for a while, a good while, in fact. If I’m brutally honest, the last Call Of Duty that I really enjoyed was Black Ops in 2010, and the last instalment that truly blew me away was the first Modern Warfare back in 2007!

I started to lose interest in the series when it decided to push beyond historical and contemporary battlegrounds in favour of futuristic landscapes and environments. That’s not to say that I have an issue with futuristic FPS games – I thought last year’s Doom reboot was a riot, and I’ve lost weeks, if not months of my life to Destiny – but futuristic weapons and exoskeletons aren’t what I wanted from Call Of Duty.

I was therefore very interested when it was announced that Call Of Duty would be going back to its roots this year, with the action heading back to World War II – the backdrop used in the first three games in the series. My interest was further piqued when rumours of an engaging campaign started to emerge; something that I find sorely lacking in so many modern games, where multiplayer action has become, if not the sole focus, definitely the primary one.

Of course, it’s all too easy to take what should be the right ingredients and still end up with a culinary mess, but thankfully Sledgehammer has whipped up quite the delectable dish in the shape of Call Of Duty: WWII. That doesn’t mean it’s perfect, but it definitely signals a return to form for the franchise, especially in terms of the single player campaign experience.

It’s fair to say that the underlying story and characters in the campaign tick just about every war movie cliché in the book, but that’s not necessarily a bad thing. From the minute you step into the boots of Private Daniels you feel at home, comfortable and in familiar territory. That familiarity instantly brings the story to life – all those cerebral flashbacks to the likes of The Longest Day, Saving Private Ryan and A Bridge Too Far draw you deep into the world that Sledgehammer has created.

The visuals are outstanding, too – not just the photorealistic representations of your squad and the terrain that they live in, but the dynamic effects of rain, mud, rubble, dust, smoke and fog. Those visuals, coupled with earth shattering sound effects, – you really want to play this on a surround sound system if you can – result in the kind of intense war experience that Sam Peckinpah would have been proud of.

The campaign plots a course through Europe, with the obligatory beach landing carnage that throws you into the thick of the fight from the get go. There’s no open world to explore here, it’s an old school ‘on rails’ narrative, but it’s engaging and leaves you wanting to push on through the next chapter every time you complete a mission.

One big change is the return of health packs – gone is the tactic of hiding behind a wall whenever you get injured and waiting for your health to miraculously regenerate, now you’ve got a finite number of health packs to use as and when you need them – just like the old days, in fact.

Your squad also plays a pivotal role in your progression and survival, with various team members able to supply you with said health packs, more ammo or grenades. It’s a good dynamic that keeps you aware of your position in relation to your squad members, since you need to be close to your buddies for them to resupply you.

While you play the majority of the campaign as Daniels, there are times when you jump into the shoes of other allied troops, which sometimes shifts the action away from standard FPS to vehicle combat. There’s a great set piece where you take the controls of a tank and have to outmanoeuvre and destroy multiple Nazi tanks to secure a location. The aerial dogfight chapter isn’t quite so successful, and feels far less integrated and engaging, but that’s one of the few weak points in the campaign.

What Sledgehammer has created is the best single player COD experience in years, taking me back to the very early days of the Xbox 360, when COD2 was one of the, if not the stand out game on the system. It’s honestly worth buying Call Of Duty: WWII for the campaign alone, it really is that much fun, but that time and effort spent on the campaign hasn’t come at the expense of the multiplayer experience. It is worth mentioning, however, that this review has taken me longer than anticipated to write because the multiplayer side of the equation was, quite simply, flaky as hell when the game first launched. In the early days I found myself unable to connect for hours on end, and then when I could get into a match, I’d be unceremoniously kicked mid skirmish.

Thankfully those problems, for the most part, seem to have been resolved now and the result is the best Call Of Duty multiplayer experiences I’ve seen in years. While I’ll admit that I’ve traditionally preferred the epic scale of Battlefield’s multiplayer environments, I’ve really enjoyed the smaller scale, faster paced matches in COD: WWII. This is partly due to the amount of time I’ve spent in the Destiny Crucible, but also because the balance of weapons and maps seem to hit a sweet spot that keeps me wanting to play just one more match.

There’s also a lot of game modes on offer, too, with classics like Team Deathmatch and Domination keeping old school veterans like me happy, with their simple dip in, dip out format making it easy to while away a free half hour when I have one. But if I want something a bit more demanding, something with a real sense of team based achievement weaved into it, War mode will deliver the challenge I’m looking for. A few more maps would be welcome, since you’ll find yourself rotating to the same ones regularly, but hopefully that will be addressed with the first DLC pack.

And then there are the zombies; quite possibly my favourite addition to the COD franchise over the years. Much like Horde mode in Gears Of War, there’s a real sense of teamwork and camaraderie as you and your squad face wave after wave of undead Nazis. As you progress you’ll unlock new areas and weapons, and face tougher opponents. This latest zombie instalment is definitely tougher than previous versions, and demands more effective teamwork to survive, but jump into the fray with a few friends and the hours will fly by before you notice.

If you’re a die-hard Call Of Duty fan you probably pre-ordered WWII months back and need no convincing, but if like me, you’ve become a bit jaded towards the franchise it’s worth giving this latest instalment a try. Taking the action back to its roots was a smart move, and Sledgehammer has created something quite special in the process. The visual spectacle is literally break-taking at times, while the campaign is both engaging and rewarding. And of course, that multiplayer bread and butter is as tasty as it’s ever been.